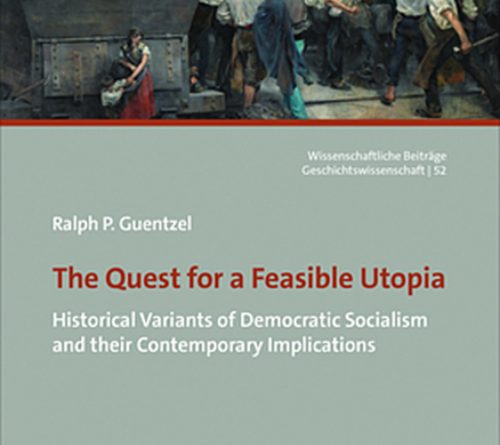 Ralph Guentzel, The Quest for a Feasible Utopia: Historical variants of democratic socialism and their contemporary implications, Nomos, 2022, pp238

With a bleak winter approaching, it can be difficult to imagine a bright future. And yet, for centuries through grim times as well as prosperous ones, socialists have theorised about what our own utopia might or should look like. For some, the intellectual practice of imagining new worlds has an emancipatory power of its own. Perhaps, if we dream hard enough, we can be freed from some of our chains. There is a doubtless beauty in such thought.

Having a utopia is also easily criticised, though; for chains are more often broken with hammers than dreams, and thought without action is rarely more than psychological palliative. Indeed, the word utopia itself hints at the folly of such idealism. It was devised by Thomas Moore in 1516, coined from the Greek ‘ou-topos’, or ‘nowhere’. It’s a play on another, similar, Greek word, ‘eu-topos’ meaning a ‘good place’. I’m not sure that humour delivered through Greek word play has as much charm now as it did in the sixteenth century, but it’s in a similar vein that Ralph Guentzel has titled his new book on democratic socialism: ‘The quest for a feasible utopia’. Perhaps, he finds this doubly irony funny.

It is difficult to identify what actually links these ‘movements’ beyond the fact they all appear in the book. Amid a seemingly endless series of numbered lists, Guentzel suggests a working definition of democratic socialism as follows: a political philosophy which ‘(1) allows all individuals to lead rewarding, self-determined lives, (2) fosters cooperative forms of interaction notably through the socialization of either the ownership of major economic assets or the right to decide over the use of these means, and (3) enables all citizens to participate on an equal basis in collective decision-making, and (4) strives to create the envisaged order by democratic means.’ If you are confused by what this actually means, then you are not alone.

To be sure, there is much to be gained by highlighting how different movements and ideas across history have communed. Unfortunately, though, in this work the author combines a vagueness in his own frame of reference with a distinctly uncharitable approach to those figures and theorists who fall outside it. We are reliably informed that Lenin had no conception of democracy, that all ‘statist’ socialists have chosen to prioritise power over democracy, and in a jarring final passage, that we must move beyond ‘identity politics’. To be so scathing of others, Geuntzel would do well not to build his own house from glass.

The problems of this book are many, but might, in true Geuntzelian style, be reduced to a short list. (1) It is entirely unclear that cooperative politics born of the French Revolution have a meaningful relationship with a Marxian analysis of the economy some hundred years later. This is the same as suggesting Fabians and Spanish Anarchists inhabited the same political sphere because they both had criticisms of capitalism and communism. (2) At various points throughout the book, and particularly in the last chapters, it is entirely unclear what separates Guentzel’s democratic socialists from social democrats. Early in the book, we are told the distinction is the overall replacement of our economic system, but by the end, this slips to its amelioration through substantial worker cooperatives and government regulation. Might a social democrat not argue for some degree of both of these? (3) The author frequently relies on sleight of hand to attribute more fame or influence to his subjects than they in fact possessed. In one such instance, the reader is told that ‘a group of British Labour Party intellectuals had begun to advocate a new form of socialism’. Two pages later, they are referred to as ‘Labour Party thinkers’. In truth, David Miller, the scholar Guentzel relies upon, could never be described as an influential figure within the Labour Party. Certainly, there is no evidence to suggest his ideas about ‘market socialism’ had much influence on Labour Party politics in the 1970s. Likewise, while CERES were certainly influential in the Socialist Party in France, at various points in his analysis the author conveniently slips between CERES and the Party to emphasise the significance of the former.

What the book does well is tell four lesser-known stories of the socialist movement. In the efforts of these movements to break from capital and orthodox left thought, they offer a degree of inspiration for the present, where it is easy to be disillusioned with lacklustre answers to the major questions of our time. Alternative visions of the future are useful, even if they only serve to sharpen our own. The quest for a feasible utopia is ultimately something of a missed opportunity then. With a little more humility, it might have proved a useful contribution to our ongoing debates.