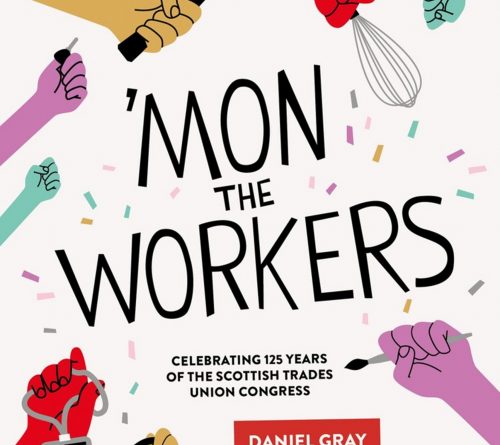 On a white background and in the centre 'Mon the Workers' and around it are the hands of workers in bright colours holding the tools of their trade with confetti fluttering around.
15th November 202215th November 20223 weeks ago Scottish Left Review 4 min read 117 Views

‘Mon the Workers hascome at an important flash point for the workers movement. ‘Hot Strike Summer’ is leading into the new ‘Winter of Discontent’ as workers from almost every sector continue gear up for the fight of their lives. Unions have never been more relevant, or in recent history, more in the public consciousness. In this key moment,it is a timely reminder that the history of the working class is the history of struggle- the struggle of ordinary workers who have taken action to stand up against injustice in all its forms.

That’s what organising is all about – engaging workers in struggle. As a union organiser, most of my work day-to-day is focused upon teaching workers the ‘tools of the trade’: how to map their workplace, how to have a meaningful conversation with a reluctant colleague, how to assess an issue and identify a target and so on. These practical tools allow workers to build power. They are essential to ensuring that we can deliver a campaign where nothing is won for workers, but rather is won by workers. As every organiser knows, if done right, a good organising campaign – whether won or lost – can change things.

But the practical tools are not enough. In a world of rampant individualism, where the workplace remains the main site of exploitation, we should never underestimate the potential damage fear and hopelessness can inflict on our movement. Fifty years ago this year, Jimmy Reid gave his famous ‘rat race’ speech, defining what he meant by the word ‘alienation’: ‘It’s the frustration of the great mass of ordinary people excluded from the processes of decision making. It’s the feeling of despair and hopelessness that pervades people, who feel with every justification that they have no real say in shaping or determining their own destinies’. Those words are just as true today as they were in 1972 when Reid first spoke them. The real job of an organiser is to provide an antidote to that feeling of hopelessness and despair, and that is why ‘Mon the Workers is not just a piece of commemorative history. It’s also part of the organiser’s toolkit.

The stories contained within its pages are about solidarity, bravery and dignity, and they help workers understand that when they stand up against injustice they are never alone. They are part of a movement and a tradition that spans generations and continents. A movement built by and for people just like them. They are an antidote to fear and alienation.

The power of these stories is that they are told by workers in their own voices. As STUC General Secretary, Roz Foyer, reminds us in the foreword, the story of our movement has ‘too often been told through the lens of our leaders, rather than those who won the victories and who suffered most through those defeats’.

The words on the page come to life because we recognise the voices of the people who speak them. We all know people like Alison, from the EIS union, who spoke about fighting for better pay in education and the power of being part of something bigger than yourself: ‘Feeling part of that collective effort was incredible … everyone was there for the same reason, all freezing our toes off for the cause.’

For young people, these stories are instructive and inspiring. Stella Rooney, a young trade unionist and artist, writes about drawing inspiration from the struggles of the past in her excellent piece From Timex to Better Than Zero. She put it better than I ever could when she said: ‘When you look back … you can make the link, and see how young trade unionists today are inheriting this past … there’s lots we should be proud to continue in our trade union activism today.’ Its workers like Stella who will carry our movement into the battles of the future – and I think we’re in safe hands.

I recently organised a PCS Young Members event in Scotland, where 30 new and enthusiastic young workers from across the UK travelled to Glasgow for a weekend of workshops on organising. At the end of day one, we took the group on a walking tour of Glasgow. We ended in George Square – and talked about the workers movement of the city – from the Red Clydesiders to the women of the recent Equal Pay campaign. In the days after the event, I asked members to write a few words about what they had learned in Glasgow. One member, Josh, who has only just joined the civil service and had never been involved in a union before, had this to say: ‘The simple truth I have realised is that we outnumber the bosses. We have collective power to fight, not just for ourselves but for our colleagues and communities. In Glasgow, we learned about the long history of the people of that city who fought for equality, dignity, and respect against even greater odds than we face today. It is in our power to try and live up to their legacy’. That’s why these stories are important, and why we need to keep telling them.