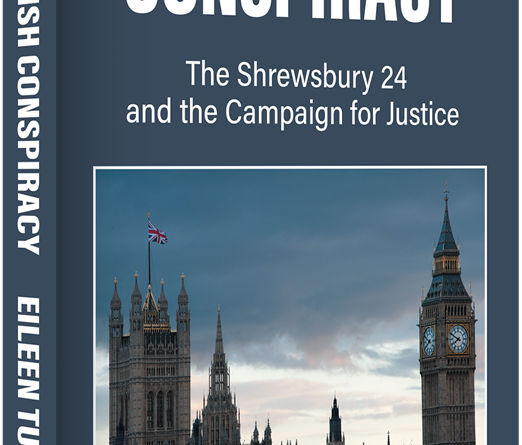 Every now and then you read a book that you immediately want to tell other people about, that you believe is important and that what you have learned from reading it is essential for others to read. A Very British Conspiracy is such a book. When the Shrewsbury 24, the group of building workers who had been charged, fined and jailed for participating in picketing during the 1972 building workers’ strike, had their charges and sentences overturned at an Appeal Court hearing in 2021 the media hardly mentioned the result. There was no big outcry and no calls for an inquiry into why such an injustice happened.

There was no apology from the police, the Home Secretary, the Director of Public Prosecutions, or any other state department, who had been implicated in the injustice. No compensation to the men or their families, whose lives had been ruined by a vindictive campaign that allied building industry employers with Tory MPs and sections of the media in a campaign that led to a decision taken at the highest level of government and the legal establishment to criminalise these particular building workers in order to attack the union movement and weaken its ability to fight for workers and stand up to government and employer policies.

Turnbull describes the details of this campaign based on years of research on her part to get to the truth of what happened. As treasurer and researcher for the Shrewsbury 24 Campaign, she had access to the pickets who were the victims of the campaign but who did not know why they, rather than any other union pickets, were targeted. 1972 was a tumultuous time in British politics. The Tory government faced the miners and the dock workers, and lost. The building workers strike was another massive victory for the UCATT, GMB and TGWU unions involved. The Heath government was under pressure from its MPs and employers to take action against unions who had developed organising capability, particularly the use of ‘flying pickets,’ in order to win disputes. There was a sense of power shifting from the employer to the workers and the pressure from the Tories and their supporters on Heath to pass new laws to address this was immense.

The government argued that laws already existed to tackle the issue and it was the police who failed to implement them and the judiciary who were not harsh enough on union members who did appear in court. And so, a conspiracy developed to target a group of workers in North Wales who had participated in picketing building sites during the dispute. The focus of the case against the 24 was picketing on 6 September when around 200 building workers mostly from the North Wales area visited building sites in Shrewsbury to persuade workers there to join the strike. Police officers accompanied them as they visited a number of sites and no arrests or complaints were made against the men. Months later charges were brought against 24 of them. The charges eventually included affray, damage to property, unlawful assembly and conspiracy to intimidate. Three of them were jailed, with others receiving suspended sentences.

Turnbull does a great service to trade unionism by detailing this establishment conspiracy, how senior ministers determined that action should be taken, despite police reports that there was no strong case to take, how senior counsel manipulated evidence, how civil servants fed information to the media to paint a negative picture of unions and individual union activists, how police witnesses changed their statements and how the original statements were then ‘lost.’

Des Warren, the main target amongst the pickets, was jailed for three years and blacklisted thereafter, never lived to see his sentence and those of the other 23 men overturned in a victory that not only vindicated their actions but that demonstrated that they had not received a fair trial due to this ‘Very British Conspiracy’ and the lengths that the establishment will go to in order to stop working class people winning improvements in their workplace and lives.

As we face another Tory government intent on further attacking union and workers’ rights as those unions take militant action, Turnbull has produced a must read for all trade unionists. Whilst we fight for better pay and conditions, the Tories and their supporters fight a war for their class interests.

Stephen Smellie is the UNISON Scotland Depute Convenor and a member of the editorial committee of Scottish Left Review.