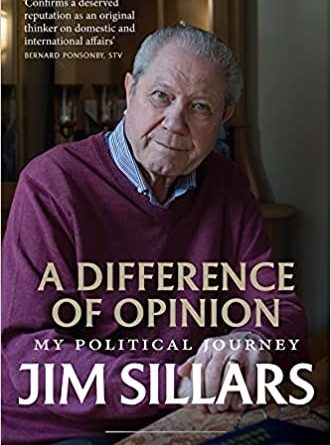 Reviewed by Will Podmore

Jim Sillars is a talented man. This intriguing book covers many different topics, on all of which he has something interesting to say. Sillars opposed the SNP’s Hate Crime Bill, calling it ‘one of the most pernicious and dangerous pieces of legislation ever produced by any government in modern times in any part of the United Kingdom’. He asserts ‘it is not possible to legislate racism out of society. That malignant social virus will be eradicated only by open discussion of its inherent falsehood and the wickedness and inhumanity that can flow from it. It is the disinfectant of free speech that will finally rid us of it’.

As Sillars wrote in 1999, ‘today’s issue of the single currency is not about the economics of the European Union. It is a major stepping stone to a federal super-state. The adoption of the single currency removes one of the core aspects of national sovereignty, control over the currency and reserves, and transfers it to Brussels … A federal EU will require, in addition to monetary and fiscal policy, the other core sovereign competencies, defence, foreign affairs and law and order to be similarly transferred to Brussels. That would not amount to Scottish independence in Europe. It would keep us as a vassal state of an all-powerful centre’. The EU may want a separate Scotland to join it, but Spain certainly does not. As Sillars points out: ‘For them, ‘Scotland’ means Catalonia. When the Spanish consul general in Scotland made a speech saying Spain would not veto Scottish entry, he was sacked’. Some in the SNP even say they want to call a referendum when the British government legitimately opposes calling one. As Sillars notes, this would just be a repeat of ‘the foolish, illegal referendum in Catalonia …’. He observes of Nicola Sturgeon’s campaigning for Britain to stay in the EU: ‘in going down to England to campaign, she legitimised the question on the ballot paper, which was whether the UK [not Scotland] remained or left the EU.’

Sturgeon now claims that the election result in Scotland gave her a mandate for separation, but that is not what she said when she was trying to win votes. She said on 26 April 2021: ‘If I was asking people a week on Thursday to vote for the question of whether or not Scotland should be independent, I am not’. When asked: ‘What are they meant to do if they want you but not independence?’ she replied: ‘They should vote for me safe in the knowledge that getting through the crisis is my priority’. Sillars describes the SNP’s ‘policy of advancing the case for independence through manufactured grudge and grievance. The ‘they are taking back powers’ rage is an example. Grudge and grievance complaints against Westminster, combined with vitriolic attacks upon unionists via social media, make for a stupid policy’.

Self-determination for Scotland: do we have Lenin’s courage?