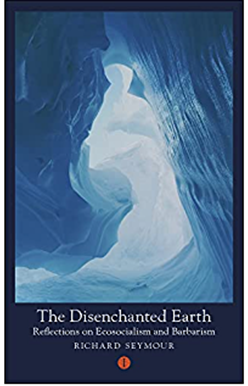 Capitalism is a ‘multi-species affair’ whose success is fortified by its ability to produce a superficial ‘screen’ distracting from its destructive origins. This trait, usually in the form of material goods or perhaps digital experiences like the Metaverse, leads to disavowal among society and now poses an existential threat to our planet. It is a recurring theme in Seymour’s new book. The capitalist system, he writes, ‘obscures its own conditions of possibility, even as the screen image of capital as a sleek, immaterial, weightless spirit is perpetually obscuring its vulgar agrarian origins, its basis in the exploitation of plant, animal and human labour’.

Meanwhile, the era is over in which democracy can co-exist with capitalism’s limitless quest for growth and there is no real sign of the revolution. The realisation that democracy as we know it will not deliver the radical action required to save our planet from ourselves has led some to imagine a benevolent technocratic dictatorship as the answer.

Or worse, but perhaps more likely, could the failures of social democracy give rise to ‘ecofascism’? The right’s climate denialism cannot hold out forever. Early signs of this tradition’s global resurgence can be seen as Fox News’ Tucker Carlson talks of immigration ‘polluting the country’ and Marine Le Pen spitefully decries migrants’ inability to care for the environment as they ‘have no homeland’. Ecofascism may not thrive while the climate debate is focused on challenging our economic addiction to fossil fuels, but it may find traction in parochial ideas more easily aligned with conservatism around preserving our immediate natural surroundings (protecting ‘our’ land from invader species including human as racists claim).

The essays of The Disenchanted Earth are set out in chronological order from 2017 exploring the long history of human society’s destructive influence on our planet and pointing ultimately to the incompatibility of capitalism with sustainable life. Thus, we follow Seymour on something of a personal journey, from sneering at climate protestors in his youth to now recognising climate change as the leading challenge of our time and the lens through which anti-capitalists should view all existential questions facing humanity. Seymour’s own journey, perhaps, reflects that of the left as a whole over recent years and although he is a distinguished public intellectual, Seymour is a self-confessed non-expert on climate science, lending this text an intimate quality as you join the process of learning and discovery.

That journey proves captivating, with the format taking the reader through a varied and comprehensive catalogue of the climate crisis’ building blocks: from an abridged history of the arctic and a reminder of the mass animal slaughter committed by the Romans, to exploring the ‘climate sadism’ of Trump and his Twitter army’s hatred of teenage girl climate activists.

Seymour dedicates one long essay to the debate on the merits of nuclear energy, offering a counter (although not a total rebuttal) to the liberal left argument held by George Monbiot and others that nuclear may save the day. In further exploring the alternatives, though, we re-learn with Seymour the obstacles laid down by the capitalist system – rather than by the laws of science – to harnessing the earth’s natural resources which simply are not compatible with our economic model. Mainstream actors have recognised and aggravated this, as Seymour cites Economist articles explaining the abundance of solar energy makes it unattractive to the profit-hungry interests of capital. Likewise, one does not know whether to feel optimistic by the realisation that we could power our whole civilisation with 0.2% of untapped tidal energy.

Other chapters go beyond energy, laying out detailed descriptions of how our means of producing goods – particularly food – is destroying life on earth to its very core, eroding the life-giving phytoplankton which produce half of our oxygen. Will ‘capitalist technoscience’ come to our rescue? Probably not, and certainly not in any equitable way.

Perhaps, the most alarming warning comes from recent experience of power outages in Texas – a natural disaster, directly associated with climate change that caused loss of life. A belligerent libertarian mindset led public opinion to be largely against federal ‘intervention’. Would people choose literally to freeze to death over receiving support from the state? To die for their capitalist freedoms?

At times, there are limitations to the territory covered by this book: energy production is a clear focus while other forms of extractivism are only really explored in depth in later essays. Perhaps this reflects Seymour’s own realisation that the burning of fossil fuels is but one of several destructive by-products of our way of life. And although optimism can be found in his insistence that climate apathy is an unnatural state, imposed on us by the constraints of modern life, the emerging social movements to which we must look to tackle the crisis are left largely unexplored, save for some critical remarks about Extinction Rebellion’s tactics.

The rawness of format (the essays were mostly first published on his Patreon site) is compelling and his intellectual curiosity and imagination shine through, often making for an entertaining read as we are presented with hopeful descriptions of earth’s next civilised lifeform burning our own carbonised remains for fuel millions of years from now.

Ultimately, Seymour successfully delivers one strong and persuasive message: simply that capitalism is incompatible with saving life on earth. Whether that be the contradiction in terms that is ‘making capitalism energy efficient’, or in-built consumerism to quench the thirst for constant profit and growth, our system does not allow us to be responsible. Instead, taking responsibility will mean liberating all species from capital.