Book Cover is a photograph of a front door to The James Joyce Centre in Dublin, which is a restored Edwardian House.
15th November 202215th November 20223 months ago Scottish Left Review 3 min read 247 Views

A hundred years have passed since Sylvia Beach, the owner of the Shakespeare and Company bookshop in Paris, waited at the Gare de Lyon for the morning express train from Dijon. She collected from the train’s conductor a package containing two advance copies of James Joyce’s Ulysses, wrapped in brown paper, a book for which she had struggled to find the money to pay the printer in Dijon. She went to the author’s apartment to present him with one copy, on his fortieth birthday, before placing the other one in the centre of the window of her bookshop. Curious members of the public stopped to gaze at the novel, the advance serialisation of which had already attracted attention, notoriety and a New York court case.

Since that day, there have been various new editions and one of the very best is The Cambridge Centenary Ulysses. Just short of 1000 pages, it is a doorstop of a book (23.5cm X 31cm X 6cm) and, with 30 illustrations plus a map and introduction for each of the eighteen episodes/chapters, represents outstanding value for money at £30. It reproduces the historic first edition but fully acknowledges the many textual amendments made by Hans Walter Gabler, in what is currently but controversially the most authoritative 1986 edition, by including them in footnotes.

Ulysses remainsat or near the top of any list of books that people know about and would like to read but never do; or if they start, give up long before its final chapter. A cheater’s read is to start at chapter four, stop at the end of chapter eight and then jump to the final, celebrated chapter and completing this route should provide motivation to fill in the missing parts. It is true that parts of some of the later chapters can be difficult when read unassisted but there are good online guides and there is a superb, freely available RTÉ dramatization. 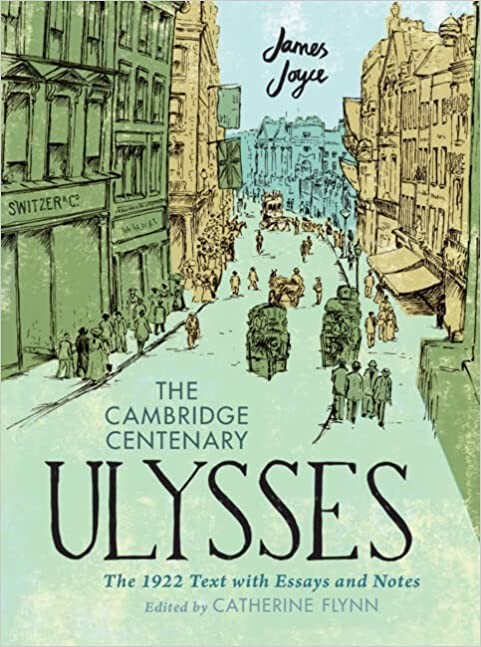 The new Cambridge Centenary edition also comes to the rescue with footnotes on each page which, in addition to the Gabler updates, cut through the excess of scholarly interpretations with succinct elucidations. There are also introductions to each of the eighteen episodes, many by noted Joyce scholars and though it is regrettable that Andrew Gibson is missing – his Joyce’s Revenge situates Ulysses as a sustained and sophisticated ransacking raid on English by a rebellious colonist of the British empire – a historical and political perspective like his is highlighted by Flynn in her perspicuous introduction. Joyce consciously appropriates forms of discourse from a language imposed on his country, subverting and playing inventively with them to create new ways of representing experience; an act as revolutionary as the insurgents’ one in the Easter Rising of 1916, using language as a weapon to dethrone authority.

The textual richness of Ulysses continues tofuel a US-led ‘Joyce industry’ but Annotations to James Joyce’s Ulysses transcends this category. Although containing more than twice the word-count of the novel it is annotating, it does not claim to be indispensable, laudably endeavouring to shed light on the countless and often minute allusions in Joyce’s text. The allusions form the fabric of cultural and topographical dimensions – dismissed as ‘stuff’ and ‘bric-à-brac’ by a hostile critic, Wyndham Lewis – that activate Ulysses as much as the novel’s surface plot. The range of cultural references, encompassing the gamut from popular forms like advertising and general knowledge to Irish history, religion, music and ‘high-brow’ literature, is as astonishing as the exactitude of urban details relating to Dublin’s streets as they existed in 1904 and Annotations records them with intelligence and prudence. The line numbers of the Gabler edition are used and these are keyed into the margins of the Centenary Ulysses, the edition that Sylvia Beachanxiously waited for, an hour before sunrise, on February 2 1922.