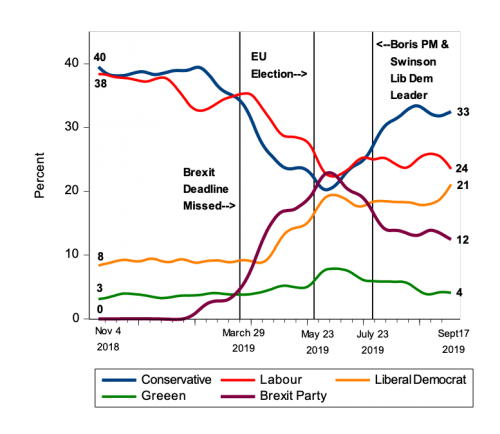 Britain is now set for what will almost certainly be the most consequential general election in its entire post-war history. The fate of Brexit, a second referendum, Boris Johnson’s embryonic premiership and Jeremy Corbyn’s radical Labour project all hang in the balance. This is why – amid the Brexit turmoil and a deeply polarised electorate – the 2019 general election offers something to everybody. As Richard Nixon once said: ‘There’s nothing wrong with this country which a good election can’t fix!’

The election on December 12 will be Britain’s 22nd general election since 1945. But it will also be the fifth nationwide election to be held in only four years. After the 2015 general election, 2016 referendum, 2017 general election and 2019 European elections, the British people would perhaps be forgiven for boycotting this one altogether. This remarkable turbulence reflects not only the immense volatility that is sweeping through British politics but also the extent to which the ‘Europe question’ has cut across traditional parties, pushed parliament into gridlock and turned one of the world’s most stable two-party systems into a state of continual flux. So, to try and make sense of the election let’s take a quick look at the polls, the voters, the parties and the seats.

Treat polls with a pinch of salt. But right now, at the start of the campaign, they tell a pretty clear story. Average public support for the Conservatives is 38%, Labour 24%, the LibDems 17%, the Brexit Party 12% and the Greens 4%. If these numbers hold then we will be looking at a comfortable Conservative majority. The Conservative Party’s relatively strong position reflects their increased support among ‘leavers’ and, in particular, voters who had previously decamped to Farage’s Brexit Party. In the latest polls by YouGov, for example, only 15% of the Conservative Party’s 2017 electorate now plan to vote for Farage, which is down from nearly 40% earlier this year. Johnson is also helped by the fact that while 60% of ‘leavers’ plan to vote Conservative, ‘remainers’ are fairly evenly split between Labour, who want a second referendum, and the Liberal Democrats, who want to revoke. A divided ‘remain’ vote in constituencies is a massive help to Johnson. A useful comparison is 1983, when internecine warfare between Labour and the SDP-Alliance helped Margaret Thatcher and the Conservatives increase their number of seats despite winning a lower share of the vote than had been won in 1979. But here’s one small thing to keep in mind. There remain a large number of undecided voters. In fact, around 25 per cent of Labour’s 2017 electorate, and 14 per cent of 2017 LibDems, do not currently know how they will vote, refuse to answer or says that they won’t vote at all. This, combined with a bit more exposure to left-right issues, including a clear pitch to the LibDems and a squeeze on the Greens, is why I am expecting the Labour vote to rally during the campaign. Let’s see.

Voters are more volatile than ever. Research recently confirmed what we basically already knew -that more people are switching their votes than ever before (or at least since the 1960s). In fact, data from the British Election Study reveals that across the three elections that were held between 2010 and 2017 nearly 50% of the overall electorate did not vote for the same party. Tribally loyal voters are not facing the threat of extinction but they are increasingly rare. ‘My father voted Labour and his father voted Labour’ is moving into the history books as we continue to move into what political boffins call the era of ‘dealignment’ -much weaker relationships between the main parties and voters. This is one of several big macro-trends that points to the wider phenomenon of geo-political volatility. With the most recent two elections, 2015 and 2017, being the most volatile in modern times, it is also a reminder for why only a fool would make a confident prediction about what will happen in December. British voters are increasingly ‘up for grabs’, shopping around the political marketplace like consumers. And they are not just thinking about Brexit. They want to talk about the NHS and crime and are deeply pessimistic about the direction of the economy. Many aspects of ‘Corbynomics’, such as nationalisation, putting workers on company boards and increasing taxes for high-earners, are also very popular. We hear much about this being a ‘Brexit election’ but do not forget one of the key lessons of 2017: the left-right divide still packs a hard punch.

One irony is that ever since Britain voted to leave the European Union, our politics have looked more and more European. A once stable two-party system has basically imploded into a four-party race. Fragmentation and a resurgent populism are the specials of the day. But the parties have changed too. This election is interesting because it will most likely define the legacy of two recent political projects: Jeremy Corbyn’s more radical left-wing project and Boris Johnson’s attempt to revive and rewire one-nation conservatism. Only one of these can emerge victorious. Corbyn needs to reassemble his 2017 Labour electorate which we can see he is already trying to do by turning up the volume on environmental protection, warning about the alleged ‘privatisation’ of the NHS, detailing backroom discussions between ‘the Tories’ and big pharma, and underlining Labour’s commitment to hold a second referendum. Johnson, meanwhile, faces a different challenge; he needs to hold on to the existing Conservative territory while ideally breaking new ground in ‘Leaveland’ by talking about regional inequality, the NHS, rebooting the northern powerhouse and speaking ever more loudly to blue-collar Britain. Corbyn knows that he needs to find a way of holding up the Labour vote in ‘Leaveland’ while reaching further into ‘Remainia’. Johnson knows that he needs to fend off these challengers in ‘Remainia’ while also marching much further into ‘Leaveland’ than Theresa May who, in the end, only captured six pro-Brexit seats from Labour.

With the seats, there is a clearly identifiable path to a majority for Boris Johnson. But it is not as easy as some think. The SNP continues to control much of Scotland, Labour holds big majorities in the North, is dominant in London and has been spreading further into the southeast. The Liberal Democrats are resurgent, bearing down on Tory MPs in nearly 30 seats where they are second. And, the Brexit Party could still cause problems. This is why so many in the Johnson camp are looking squarely at Labour seats that voted for Brexit. If Johnson’s planned invasion of Labour Brexit territory can go as far as seats like Wolverhampton North East, which last went Tory in 1987, or Stoke-on-Trent North, which has never been held by the Conservatives in the post-war era, then a wave of other pro-Brexit Labour seats will likely turn blue, from Dudley North to Barrow and Furness, from Ashfield to Bishop Auckland. A strong majority would likely follow.

But what if this does not happen? Throw in a decent Labour Party campaign and a strong challenge from the Brexit Party and it is not hard to see how seats that the Conservatives won only two years ago – like Mansfield, Copeland, Walsall North and Stoke-on-Trent South – could flip back into the red column while other highly marginal seats, like Thurrock or Southampton Itchen, fall the same way. A different dynamic will be playing out in ‘Remainia’ where Conservatives will need to implement a defensive strategy to stop Labour from taking too many seats. There are nearly 40 Conservative seats that voted ‘remain’ in the referendum, or are very marginal ‘leave’ seats, where incumbent MPs have a majority of less than 10 points. Johnson simply has to stop the ‘Revenge of Remainers’ from crashing through these seats, from Pudsey and Chipping Barnet to Milton Keynes and Watford. Others, like Hastings and Rye, or East Worthing and Shoreham, have probably moved clearly to ‘remain’ due to population churn. Then come the LibDems. Remember, one key reason why David Cameron won a surprise majority in 2015 was because he captured nearly 30 seats at Nick Clegg’s expense. But this time around, it is the LibDems who are looking for revenge in seats like St Albans, Richmond Park, Cheltenham, Lewes and Cheadle. Johnson has to fend off this challenge and shore up his ‘Blue Wall’ in the southwest where ‘leave’ seats like Cornwall North and Devon North will also come under threat. And then come SNP-Conservative battlegrounds. Two years ago, more than half of all seats that were gained by the Conservatives came at the expense of the SNP. But today it looks likely that some of these will be lost. Eight seats, such as Stirling or Gordon, could easily fall to the SNP on a swing of less than 5 points. For this reason alone, Johnson will be well advised to think about how to revive his offer to unionists and ‘leavers’ north of the border. In short, Prime Minister Johnson’s path to a majority is clearly visible but it is also one that is littered with obstacles and potential pitfalls. Can he pull it off? Time will tell and we won’t have long to wait.

Benefitting from the Brexit benefit of broken Britain