‘The COP26 summit in Glasgow is a defining moment in the struggle to keep the planet from climate catastrophe’ warned the Financial Times editorial on the eve of the event on 29 October 2021. Yet it is fair to say that all eyes have not been on the ‘ball’ as far as global warming is concerned since the last COP gathering. The UN’s annual Conference of the Parties was delayed a year by the COVID pandemic which in turn commanded most of the world’s attention and to some extent still does. It is understandable then that Boris Johnson felt the chances of success in Glasgow was ‘touch and go’ according to the Financial Times (26 October 2021). That may be expectation management on his part of course. On the other hand, global warming ‘successes’ are in such short supply that UN Secretary General, Antonio Guterres, gloomily insisted the world was ‘still on track for climate catastrophe’ after the G7 failed to deliver the £100bn climate finance promised to the developing world at COP25. His analysis puts the planet on course for a 2.7oC temperature increase above pre-industrial levels by 2100. And this, after the much-heralded Paris COP in 2015 agreed to a 1.5oC rise.

And yet the approach being taken by big business and its political leaders like Johnson, as evidenced by the Global Investment Summit held in London in October, is to complacently promote ‘business as usual’. Private capital was promised such lucrative rewards for greater engagement with the global warming threat that consequently their appetite for electric cars, renewable energy, plant-based diets – and the financial rewards accompanying them – is now insatiable. The transition from fossil fuels to renewables, for example, is being led by multi-national corporations like Iberdrola, owners of Scottish Power, among others. The earth’s bounty of free wind, tides and sunshine is being privatised and sold back to us by venture capitalists. A new boom is being lined up on the journey to ‘net zero’ and the world’s poorest stand to get nothing. It’s the age-old conflict in our ‘grave new world’. 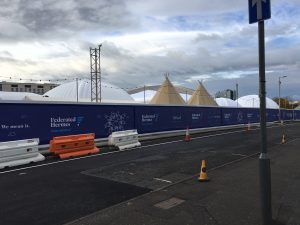 The Scottish Socialist Party’s (SSP) view is that working people need to be aware of the threat global warming poses and be alert to solutions that both benefit and dis-benefit us. Decarbonisation and moving towards a plant-based diet can help keep the global temperature rise below 2oC. Additionally, there are, as the recent STUC paper ‘The Green New Deal’ has shown, thousands of jobs that can be created in Scotland in renewable energy, retro-fitting buildings, extra demand for public transport, improved energy efficiency, waste management and in imaginative new uses of our land, forests and seas.

In embracing the challenge climate change poses, the SSP advocates a socialist ‘New Deal’ where the transition to renewables is embraced with gusto and guarantees are provided to those whose livelihoods are threatened by enforced reconfiguration of our economy and society. All solutions, however, must, as far as the SSP is concerned, include the redistribution of wealth. That requires a serious political challenge to global capitalism, of course. When the rich and powerful are so resistant to that change, huge political challenges are posed and new leadership of the working-class movement is required.

Two initiatives the SSP has rallied behind could deliver both. Our Bill to introduce Free Public Transport, presented to Holyrood 20 years ago, sought to drive down emissions and reduce inequalities together. The Belgian city of Hasselt introduced the measure first in 2000 to great success. Similar initiatives were then subsequently taken up in the ‘downtown’ area of several US cities. And Luxembourg recently became the first country in the world to follow Hasselt’s lead. Malta last month unveiled similar plans. It’s clearly an idea whose time has come. Our second key initiative demands the return of Scotland’s oil, gas and electricity industries to public hands to lead the transition to clean energy and eradicate the scourge of fuel poverty. As things stand, private energy companies reap the rich rewards Scotland’s natural bounty bestows whilst fuel poverty kills thousands annually.

Socialists must fight for solutions to global warming that make our lives easier and the world fairer. In the run up to COP26, the SSP campaigned on street stalls, leafleting door-to-door, writing letters to the press and to Government Ministers and hosted both ‘in person’ and online forums urging people to combat global warming and widening inequalities together.

And the response? Initially, many felt global warming was an issue of little immediate concern to them. Then, as the publicity surrounding the Glasgow event intensified, we noticed how young people in particular seemed better informed about the issues and conflicts involved. So public awareness of the need to ensure working people’s interests are fully considered in this debate has markedly increased. Of course, the question inevitably arises ‘who is going to deliver such progressive reforms?’ Is Nicola Sturgeon going to introduce free public transport? Or is Keir Starmer going to return essential public services to public hands? No, of course not. Working people are going to have to press for them ourselves through mass action and effective political mobilisation. At the same time, the global warming protest movement needs to develop a deeper understanding of the material interests of the mass of the population, not least in the developing world.