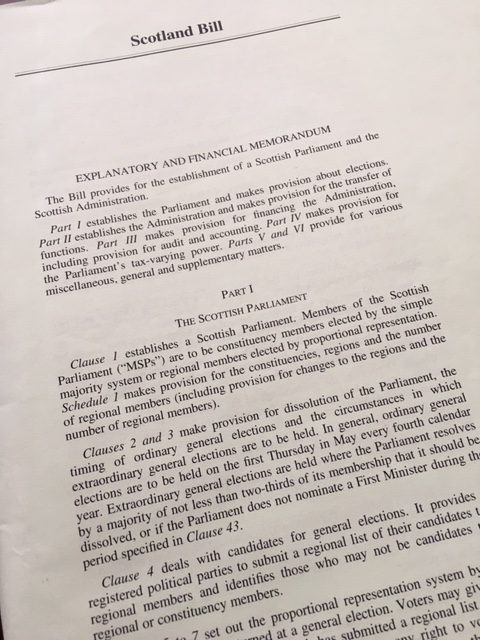 A second independence referendum will take place. Maybe not this year or even next but it will take place. With current opinion polls now giving independence a small majority, there is a strong possibility that the referendum will result in a ‘yes’ vote. Facing up to that possibility trade unionists can dig trenches and join with those people and interests of all stripes to defend the continuation of the United Kingdom. That means defending a Tory led Brexit-distorted country and institutions where inequality is central to the capitalist project being further developed by the current Prime Minister.

Alternatively, they can face the prospect of independence as a project worth attempting to shape into a movement to create the kind of Scotland that meets the aspirations of the working people that make up our unions.

In 2014, unions like UNISON sought to do something similar by staying neutral on the question but raising the level of debate to one about what kind of Scotland we were looking for. Indyref2 will be fought out on different territory and the argument is already underway. Now is the time for the union movement to enter the debates to influence the offer of independence that will be voted on.

If unions refuse to engage with the independence movement, and that means more than talking to a few SNP politicians, then the offer of independence will be shaped by other forces, with different interests and principles. We will then have a choice between two very unattractive options.

Union members may decide at the end of this, and despite the best efforts to influence what is on offer, that the risks of independence are still too great or that, despite the Johnson/Cummings regime at Westminster, we would be better taking our chances and praying for a Labour government, sometime. However, the opportunity to consider voting for an independence based on union principles should be seized upon to see what the independence offer could be.

These union principles of democracy, equality and solidarity based on human rights, environmental sustainability and peace are worth fighting for in any circumstances. So, what would an independent Scotland look like based on these progressive principles and can we get them adopted by the independence movement before the referendum?

There are many policies that we could argue for, in other words, a shopping list of left-wing socialist policies. However, a referendum on independence should be based on principles and none are of a higher moral and ethical character than union principles.

The focus, therefore, should not be on the detail of what the government of a future independent Scotland should legislate for but what the foundations of the new state should be. What is the purpose of the state, its institutions and its elected representatives? These would be agreed in the constitution of the independent country. It is on this issue that unions have an opportunity to influence the future of the proposal for independence.

The constitution of an independent Scotland should confirm that the people are sovereign and enshrine the democratic rights of all people living in the country to participate in our democracy, to be able to hold politicians to account and to organise to do this. That would include the right to join a union that has, in turn, a right to represent workers without restrictive laws to weaken their ability to organise. It would state clearly the equal rights of all people regardless of gender, race, ethnic origins, place of birth, disability, age, sexuality or class.

It would recognise the solidarity of the country towards everyone and guarantee a right to a health service free to all, the right to an education, to a warm home, to food and an income to guarantee a decent standard of life. It would enshrine that taxation would be fair and progressive and that all citizens would have the right to these universal benefits. Public services would be run and be democratically accountable for the public good without the profiteering of individuals or corporations.

It would confirm that government would be responsible for economic and industrial development that put the interests of working people and a zero-carbon sustainable environment ahead of profit. It would guarantee minimum wages that were living wages. Finally, a Scottish constitution would enshrine and make it a requirement of government that foreign policy and relations with other nations would be in pursuit of peace at home and abroad and seek to promote economic, environmental and scientific co-operation based on internationalist solidarity.

In order to take forward these ideas, unions do not need to commit to support independence. They do, however, need to commit to seek to negotiate the best deal possible for their members to decide upon.
A union initiated and led ‘constitutional convention’ involving civic society, environmental groups, students from schools, colleges and universities, representatives from all our diverse and minority communities, business, academics, and political parties would be an opportunity to debate and discuss what the foundations of an independent Scotland should look like and what the constitution should include. Within such a forum, the different interests of union members could be represented with the aim of making sure that all voices are heard and not just the loudest, or the richest or the ones with the biggest saltires.

Stephen Smellie is the Depute Convener for UNISON Scotland and a members of the Scottish Left Review editorial committee.

Uniting for change in UNISON?