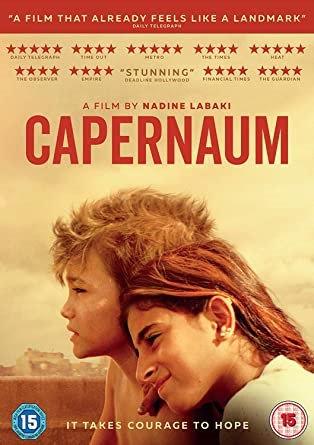 Capernaum is a devastatingly captivating drama which overflows with ingenuity and social realism. From the outset, in casting non-actor, Zain Al Rafeea, to play the main role of Zain El Hajj, the filmmakers gifted their audiences with an outstanding, heart-and-soul character. Real-life Syrian child refugee, Zain, effectively carries the entire film. He embodies his fictional character with heart-breaking aplomb. Not since Ken Loach cast teenager, David Bradley, in Kes (1969) has a character conveyed such powerful emotional and cultural relevance and truth.

Set in Beirut, the film opens with shocking images of Zain – whose age his parents cannot confirm, but who looks no more than nine years old – being taken prisoner and having to explain himself before a court judge. We learn as the film progresses that his crime was to stab a male landlord who was given his eleven-year-old sister, played by Haita ‘Cedra’ Izam, as a wife. The revelation that this trade-off was agreed by their parents, in order that they are able to keep living in their shoddy apartment, is genuinely harrowing – as is much of the film. Yet, there are touches of humour and lightness. There is also a surprising abundance of warmth and humanity.

We come to realise that the strategic reasons which compel such an audacious act by Zain are driven by his worldly-wise integrity. Somehow, amongst the dark tragedy of events, his character has evidently developed into that of a sceptical, strong-willed, protective, intelligent youngster who is knowledgeable beyond his years. Consequently, he articulates his purpose to the court judge with charismatic directness: he wants to sue his parents for bringing him into this world, and he wants to stop them from bringing more children into the besieged, miserable world into which he and his sister have been born.

The street-smart boy shines amongst the backdrop of adults who are conditioned to survive amidst abusers and con artists who feed off their children and treat them as disposable commodities. As the narrative of Capernaum progresses, it becomes clear that Zain is the voice of reason and justice, and his message is amplified when he calls a live broadcaster while he is incarcerated to tell them why he wants to stop what is happening to him and around him.

The emotions we witness in the film are often glaringly true because many of the indigenous characters in the film have witnessed identical realities. Distressing events which actually happened in real time indubitably emphasise this verisimilitude. For instance, ‘illegal’ Ethiopian immigrant and mother, Rahil (Yordanos Shifera) who agrees with Zain that he will look after her infant, Yonas (Treasure Bankole) is arrested and imprisoned in the film. In interviews, director Nadine Labaki spoke of how this happened in reality to the actor and her child whilst they were filming Capernaum. Labaki has also explained in interviews that the court judge in the film appears as himself.

Exceptional in its power and impact – with real events paralleling those on screen as the film was being created, Capernaum is truly matchless. It is undoubtedly extremely moving. Yet, its reason to be is heartening. The effectiveness of Capernaum goes beyond audience satisfaction. When their film was in the can, real-life partners Labaki and producer, Khaled Mouzanar, set about creating a charitable foundation to support, assist and educate youngsters in Syria and Beirut. Their ultimate aim is to make the lives of children and young people who are in similar or identical situations as those in Capernaum significantly better.

Zain Al Rafeea, in particular, is consequently resident, and being educated at schools, in Norway. This was achieved with the approval of his real parents, whose lives in Lebanon are impoverished and beyond tough and whose love for their son contrasts markedly with his ‘heartless’, fictional parents in the film.

There are several interesting Q&A videos and ‘making of’ documentaries and information online for those who would like to learn more about Capernaum from the cast and crew. Significantly, reports consistently state that in May 2018, it received a 15-minute standing ovation when it premiered at the Cannes Film Festival. The film was entered to compete for the Palme d’Or and won the Jury Prize.

Capernaum will stay in the hearts and minds of its audiences for a very long time. It will forever be impossible to discuss how and why fiction mirrors reality and vice-versa, without now referring to this incomparable, heartrending film.