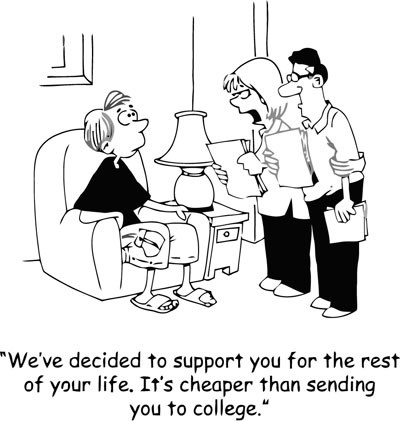 Brian Boyd and Henry Maitles lay out a wide-ranging critique of what is right and wrong in education.

The Covid pandemic has as a side effect in that it highlights weaknesses and contradictions in structures and focuses on them. Nowhere is this more obvious than in school education. The exam fiasco during the summer highlighted the iniquity of algorithms in managing exam results. It was openly unfair. The inequalities, now much more exposed, led to a student and parent anger that will make a return to the old hidden algorithm much harder.

It is over two decades since Tony Blair declared that his three main priorities were ‘education, education, education’. In this, he was reflecting a worldwide belief that the knowledge economy, whether through graduates or skilled workers, was paramount to the competitiveness of a national economy. The chosen method across the world for improving education was a neo-liberal model, which saw the market as the key focus to ensure change in a system that seemed resistant to any major shift in perspective. This change process was started by conservative-type governments across the world but has been enthusiastically taken up by social democratic governments too.

The impact of this was to introduce the market into education – testing, league tables (of schools, universities, colleges), specialist schools run by unelected and unaccountable group of interests, work intensification and so on. Other aspects, such as humanity, citizenship, diversity, cultural issues and fun were put to one side as schools and universities were gauged on metrics like exam results. Linked in with this was the commercialisation of schools and higher education, which has reached a peak in the USA.

Comprehensive education is now some 55 years old and remains the bedrock of our approach to schooling. It is worth reminding ourselves that when Circular 10/65 (600 in Scotland) was issued by the Labour Government in 1965, the key issues were social class and selection. Against a backdrop of the Qualifying Examination (and 11+), the Robbins Report of 1963 spoke of ‘the pool of untapped ability’. Robert Pedley in his The Comprehensive School (1978) book put it succinctly, saying: ‘if one keeps open the door of full opportunity, many more children will pass through it.’

Our schooling in Scotland is, on the face of it, comprehensive. Our pre-school provision is also as is our primary education. But, are our secondary schools truly comprehensive? The abolition of selection was a key aim of Circular 600, and yet in many cases we have replaced external selection with internal selection. Given that we know there is a gap to bridge in attainment, how can we continue to accept that pupils (especially boys) from disadvantaged backgrounds are most likely to be in ‘bottom sets’? It was these pupils that the now infamous algorithm failed.

All of these issues have emerged again and we need to ask ourselves if we are prepared to follow through on them. As was suggested in the Scottish Parliament, we must track this year’s cohort of university entrants to see if, by allowing teachers’ predictions to stand, any drop in standards is discovered. While we await the outcome of such a longitudinal study, perhaps a question is whether universities should become comprehensive too. The ‘downward incrementalism’ of universities’ insistence of ever higher entrance qualifications, especially in medicine and law, distorts learning and teaching in schools, especially in the senior years.

A ground breaking idea to improve Scottish education had been the Curriculum for Excellence (CfE) in the early 2000s. It was an attempt to rebalance Scottish education by emphasising other aspects of a rounded education: the 4 capacities (successful learners, confident individuals, effective contributors, responsible citizens) were to be of equal importance in the school. In reality, particularly in secondary schools, successful learners, based on exam leaving results, came to be the dominant factor and now effectively is the measure of a good school. This determines curriculum, subject choice and teaching styles. In essence, the tail of the exam waves the dog of the curriculum in secondary schools. The curriculum, thus, suffers from this distortion. CfE has come in for criticism, mainly on issues which were not part of the original report. A study of curriculum change in Scotland demonstrated that once a Working Group or Committee, charged with delivering change, has completed its task, the report is sucked into the centre, changed and rebranded beyond recognition. Thus, it was with CfE and most of the targets for the doubters only came about after the publication of the report.

What we need to do in the coming months is to return to the principles and outcomes. CfE was built upon the previous set of the 5-14 Programme and added Depth, Relevance, Challenge and Enjoyment and Personalisation and Choice. Have these been addressed? The outcomes of successful leaners, confident individuals, effective contributors and responsible citizens clearly have not. We are fixated on a narrow definition of learning, namely, that which can be tested or examined. And yet, our post-Covid world is almost certainly going to need confident individuals, effective contributors and responsible citizens. Now since change is inevitable, we would argue that it should be pro-active. We need a curriculum which develops the potential in all children. We have an opportunity to recalibrate our system but we should be under no illusions that it will be easy.

Let us highlight this through assessment. The current national assessment system is not fit for purpose. From testing in P1 to Highers in S5, learning plays second fiddle to examinations. The exams distort teaching and learning, put teachers and students under stress, and tell us very little about the extent to which young people, after some fourteen or fifteen years in the system, have emerged as successful learners, confident individuals, effective contributors or responsible citizens. Chomsky, in Chomsky on MisEducation (2000), has argued that we should reclaim the notion that ‘schooling is a public good and a democratic and a democratic force’. Our current examination system has very little to offer in this regard.

Indeed, a large surprise for us when we moved into the university sector in the 1980s and 1990s after years as high school teachers was that there were almost no exams in most universities in most subjects. After years of being quizzed or quizzing in school as to exam results – the only measure apparently of the quality of teaching – the university model of a series of modules, the mastery of which depended on a student’s ability to submit an assignment, report or presentation, was actually liberating. It was a measure of whether the student understood and could use the knowledge developed during the learning. Exams, though, tend to be a measure of memory. Learn the content by rote, regurgitate it and then forget it. It is a terrible indictment of our school leaving qualifications – they are based on shallow learning. And, indeed, the decision in early October 2020 to abandon next year’s National 5 exams was added to by a proviso that a rigorous rote learning prelim would be the basis of the results.

So, why do we have these exams? We think that they are a tool of a managerialist education system designed to police teachers and it is a convenient tool for enabling national and local league table placings to be developed – the measure of a ‘good’ school becomes its Higher results. Further, the universities like them as it enables choosing without interviews. It is worth noting that the committee drawing up the CfE proposals in the early 2000s discussed getting rid of exams, but they were told that that would not be feasible. The universities were clear that they wanted them. The exam system heavily discriminates in favour of private schools, schools in better off areas and after school tutoring – the amount of private tutoring going on in better off areas is staggering. Indeed, for many teachers, a key critique of the CfE is that it does not prepare students for the Higher exams. Ironically, it is actually probably correct – the best way of preparing youngsters for rote exams is to develop rote learning earlier.

Further, in the secondary school, over the years, hierarchies of subjects have emerged, in line with universities and their demands. English, maths and the sciences are in the first tier; the social sciences and modern languages come next; thereafter, the so-called practical subjects and the arts find it frustrating that neither schools nor universities value them. Parity of esteem is conspicuous by its absence. Not only that, but it is surely incumbent on a country which strives to be independent to place its culture and its history first and foremost in the education system? While doing so, it might be time to re-visit out-door education. Up until the 1980s and 1990s, Scotland had an enviable array of Outdoor Learning Centres, many of which have been sold off. In a country like Scotland, surely our education system should not only embrace the great outdoors, but should understand how the countryside is managed, who owns it and on what basis changes are made.

The challenge for all of us working in education is to work together to produce a comprehensive system. CfE sought to emphasise that we need to have trust in our teaching profession. ‘Autonomy within guidelines’ was how the 10-14 report phrased it. Intelligent accountability starts from a basis of trust but the recent exam debacle shows that we have a long way to go to achieve it. The Scottish Qualifications Authority (SQA) and its predecessor, the Examinations Board, has exerted too much influence over syllabuses, examination content and, of course, how pupils are assessed. Her Majesty’s Inspectorate of Education (HMIE) traditionally decided, with the minimum of consultation with the profession, how schools were inspected, how they were assessed and graded, what the categories were and, of course, how the reports were published. Is it too much to argue that schools might be trusted to behave professionally with the best interests of pupils at heart?

Egalitarianism, or at least equality of opportunity, was the goal of the comprehensive movement but, as yet, it has not been achieved. Political change, system change and philosophical change may be a starter when we begin our post-Covid review of what had taken place and what kind of country we want Scotland to be. We surely want more equality, more opportunity and more engagement. We also need an education system which promotes creativity, critical thinking and problem solving. We cannot ignore mental health and well-being, and we have challenges to meet in terms of how schools can be part of addressing issues such as obesity.

Finally, there is a mass of research evidence to show that those in deprivation do far worse in terms of educational attainment and, thus, in terms of opportunity than those in better off areas. Whilst there can be the odd ‘blip’, a survey of those schools with lowest attainment generally correlates to those schools with the highest negative social factors. It is now generally accepted that the key predictor of educational attainment is the parental income; that’s why the education gap grows as the wealth gap grows. It is far harder for these kids to move out of poverty and areas of deprivation than we had perhaps previously assumed. This is not to say that schools can do nothing in this but the challenge facing governments is that it needs macro-planning not tinkering at the edges.