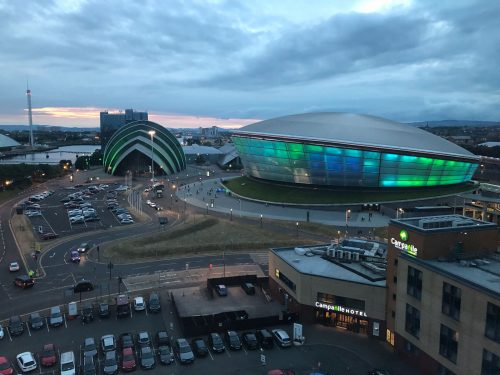 The lack of urgency among unions about the climate crisis is concerning. In mid-February, after a fortnight of yellow/amber weather warnings causing widespread damage and flooding, increasingly what is happening on the news is likely to be happening outside your window.

Despite the youth climate strikes marking a year of action in February, the presence and visibility of unions on these is still not enough. Union leaders, if vocal at all, seem unwilling or unable to find the words to instil the necessary confidence in their members that this is the fight of their lives. And yet, most members are concerned about what the changing climate and increase in extreme weather means for them. So, what, if anything, are the unions actually doing about it, apart from repeatedly telling the climate strikers what we can’t do? Instead, we need to start talking about what we can do.

At this year’s STUC congress, Glasgow Trades Union Council (GTUC) is putting forward a motion calling for unions in Scotland to mobilise strategically and effectively for COP26, and to create a dedicated resource to develop those strategic aims throughout 2020. As the STUC will form part of the ITUC delegation to COP26, it makes sense we have the debates in advance given the divisions amongst us.

Clarity and consensus from within could help create the political will to move to renewables on a large-/whole-scale basis and identify the necessary jobs which would allow workers in dirty and polluting industries to begin transitioning to them, as well as agreeing strategies for workers in other polluting sectors such as transport.

The Campaign Against Climate Change’s 1 Million Climate Jobs publication, supported by 8 unions, set out a proposal for jobs that lead directly to cuts in emissions in greenhouse gas as new government jobs: building and delivering renewable energy power, retrofitting existing homes and buildings, and building and operating a massive public transport system powered by renewable electricity. Long-standing climate commentators advocate instilling a military efficiency to our climate agenda, similar to during the two world wars when all industry contributed to the war effort. Only this scale of ambition will see us adapt to the anthropocenic reality of which we are still just seeing the beginning.

Opportunities exist to place the climate crisis at the heart of the union movement. GTUC has already decided on a climate-themed May Day for 3 May 2020. If this approach was taken by all trades councils across Scotland, it would provide the necessary platform for the climate conscious to better speak to and connect with local workers. But with 1st May also falling on a Friday this year and in sequence with the monthly ‘Fridays For Future’ climate strike calendar, we should seize on the global significance of international workers’ day to make unions relevant to young people.

We also need to recognise the radical changes to society that are required to survive in a world where carbon production levels will be the determining factor, like introducing free public transport. Indeed, there is an ongoing campaign by the Campaign Against Climate Change Glasgow, Get Glasgow Moving and GTUC to have this in place for COP26. Because delegates’ transport costs to the official conference will be subsidised by the UN, this means that a 2-tier system with local communities once again losing out and having the COP as something that happens to their city and then moves on.

There is a manifest risk that without the necessary investment in Glasgow’s (and surrounding local authorities’) public transport systems, the number of delegates to the official conference (c30,000) in conjunction with the anticipated number of protestors/activists from across Britain and the globe (c100,000) could cause them to collapse. The necessary investment in sustainable, low/zero carbon electric buses and trains with an increased number of routes would require significantly more jobs to create the necessary infrastructure, while providing an opportunity for car owners to be incentivised out of their cars without any additional cost. And if people got the chance to experience this in practice, it would inevitably generate a demand upon its removal which would likely seek to have this reinstated. Lessons on mobility and social justice from places such as Dunkirk, Tallinn and Changning, where public transport is free, are all positive. Luxembourg plans to join them as the first country to do so this March.

Presently, a local campaign aimed mostly at buses because of the re-municipalisation powers granted to local authorities in the Transport Act 2019, free public transport is one over 60 recommendations Glasgow City Council will be voting on in April, after its declaration of a climate emergency last June. Wider participation in a national campaign backed by Scotland’s unions would lead to questions about the inclusion of free rail travel too. With the Scottish Government’s December decision to strip Abellio of its franchise in 2022, but remaining opposed to nationalisation, such a campaign could help focus the mind of the SNP Scottish Government that these are the types of bold moves required if it wants to live up to its own rhetoric as a world-leader in responding to climate change.

Organising for COP26 should be seen as building for the reality which is going to occur on or around 2030, and for which we are sorely unprepared. If the weight of numbers is to be a determining factor then unions need to give their members the confidence that their presence in Glasgow will have a positive influence on the decisions made inside the conference, and start booking trains and buses to get them there in the thousands.

Stuart Graham is a Glasgow City Unison delegate to Glasgow Trades Union Council and a member of the Campaign Against Climate Change Glasgow group.

Against de-politicisation: For working-class environmentalism