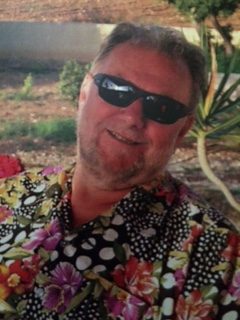 Scottish Left Review was shocked to receive news of Chris’ untimely death. To his last day, he was active in promoting Richard Leonard’s campaign for leader of Scottish Labour, and the Scottish Cuba Solidarity Campaign’s festival of Cuban films. His last blog encouraged support for the latter, together with the ‘Representing Revolution’ film festival taking place in Dumfries that weekend.

Following graduation, Chris worked at Glasgow’s Mitchell Library and became active in NALGO and its successor union, UNISON. There, too, he met Doreen, his life partner of forty years. His talents shone particularly in the field of communications, and UNISON in due course wisely followed its frequent practice of promoting an outstanding lay official to employed professional status as its Communications Officer for Scotland. In this role, he enhanced the union’s profile and that of the wider movement with trenchant interventions in industrial, political, civic and cultural life. His ability and sincerity in operating in such combustible arenas won Chris respect and admiration from friends and foes alike.

In the words of his friend, the composer William Sweeney, Chris was ‘a great brilliant bear of a man’: at six feet five, built to match and full-bearded. ‘The Captain’, as he became known, was immediately identifiable in any company or crowd. Taking early retirement in 2010, Chris’s activity and influence seemed, if anything, to widen. He was a key figure in Fair Pley, the Glasgow-based arts company: a regular reviewer and correspondent for the Morning Star; a contributor to Scottish Left Review; and, as Chair of Glasgow Friends of May Day, the driving force in the maintenance of an all-year round programme of events in support of the traditional workers’ festival.

As a leading light in the Campaign for Freedom of Information in Scotland, Chris used his political and media skills to promote and extend access to information rights across Scotland which included demanding, repeatedly, at events and in publications that housing associations should be covered by the Freedom of Information (Scotland) Act 2002.

It was on behalf of Glasgow Friends of May Day that Chris joined with the Scottish Labour History Society to organise an annual programme of labour heritage walks during ‘Glasgow Doors Open Week’. In this, its fourth year, Chris led the concluding event on Saturday 16 September. Our deepest condolences go to Doreen on the passing of a good man, a great socialist and internationalist and a dear friend gone too soon.