candidate for Glasgow North East at SECC 7th May.

Billy pointed out the irony of Glasgow’s Labour MPs being elected to fight Tory cuts when the Labour council was cutting jobs, wages and services. Three years ago Scottish local councils were elected for the first time using a proportional representation system which resulted in the largest number of new councillors in a generation. Councillors also became in effect ‘employees’ of the council with a basic salary of £15,452 plus pension, although the leaders of the largest councils received £46,357, plus extras for serving ex-officio on various boards. In November 2007, the SNP Government drafted a Concordat, subsequently signed up to by all councils, which gave councils an increase in grant and greater freedom on how to spend their revenue in return for a council tax freeze.

Have these changes improved local government? The following four articles look at our four main cities and how they are governed. In this piece I wish to look at common themes and lessons for those seeking more from our elected representatives and local services. 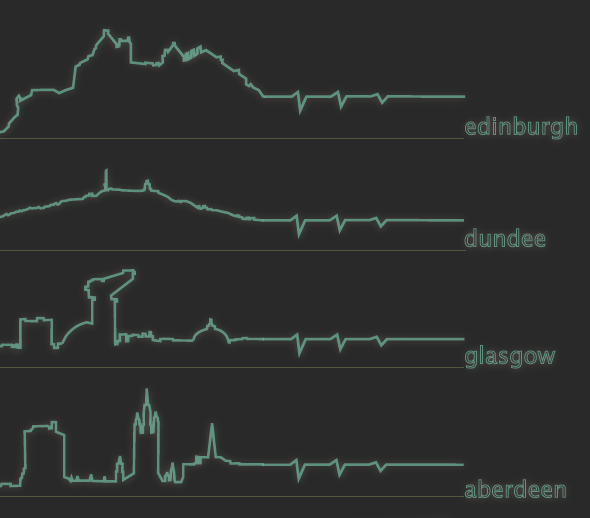 Neil Gray and Leigh French emphasise how an entrepreneurial culture now pervades government both local and central. They show how in Glasgow this results in blurred distinctions between business and government through ‘Team Glasgow’; a plethora of ‘Arms Length External Organisations’ (ALEOs) run by well paid councillors appointed by the leader – a resurgence of political patronage, and lingering suspicions of dodgy contracts. Aberdeen has ACSEF, a similar body to Team Glasgow. John Aberbein recounts how this body is trying, against popular opposition to force the council to redevelop the Union Terrace Gardens. Ian Woods, the propective developer, is like Donald Trump before him, trying to blackmail the council which has in recent times become in effect bankrupt.

In Edinburgh, Peter McColl notes the grand plan of city redevelopment seems to have partially unravelled with the ousting of the Labour administration, however, outsourcing of services is set to gather pace as part of a cost cutting exercise by the Lib Dems. Finally in Dundee, John McAllion notes how despite successful resistance to Stock Transfer, PPP for schools has been embraced by all politicians as ‘the only game in town’. Furthermore, like the other cities. strategic planning seems driven by unelected agencies promoting business whilst Dundee remains a city mired in poverty.

Did you vote for this?

Proposals for ALEOs did not appear in Glasgow Labour’s manifesto. Moreover it has never been adopted as a policy by the city Labour Party. Yet under ex-leader Steven Purcell, with little discussion in the Labour Party or indeed the council Labour group, services were in effect outsourced. The removal of the bulk of council services, except for (at present!) education and social work, from direct council control is complete. Will other cities and councils follow Glasgow’s lead? What will stop them? Can the changes be reversed?

It will be a further two years until councillors face re-election. Unless they resign for personal reasons there is little to force them to comply with the electorates wishes till then. Although councillors can be lobbied and taken to task on issues directly relating to their Ward, on most issues and particularly budgets, parties decide their policies at a group level. Your local councillor can quite safely say they argued the case but were outvoted. In many councils and parties, group discussions are in secret and a whip is applied at the council meeting. Thus anonymity is maintained and your councillor cannot easily be held to account by you.

If you are a member of a political party, things are slightly better. Most parties elect prospective councillors from local party branches, and a failure to tow the local party line on an issue can result in not being selected to stand at the next election. Once again however, this mainly relates to local issues. The safeguard used to be that key policies were agreed citywide by the city party and the ruling group would either adopt them or explain why they were ‘impractical’. But if all the council does is operate through ‘arms length companies’ – who actually decides policy? Although the Council ‘owns’ the companies running these services, how does it control them or even set their policy? It would seem that individual councillors on the ‘boards’ of these companies make the policy. The Council, the Labour Group and Labour Party are not involved.

Moreover, given that each individual councillor is very busy with their own remit, most have little appreciation of what others are doing. Other parties are also represented (possibly tokenistically) on these ‘boards’. What discussions do they have as regards policy? Does commercial secrecy apply? Similar questions can be asked of TIE in Edinburgh, or ACSEF in Aberdeen. Do councils, as opposed to individual councillors, actually decide policy anymore?

COSLA and The Scottish Government

The biggest decision made by Scottish Councils over the past three years was to abide by the ‘concordat’ set out by the Scottish Government to in effect freeze Council Tax. How was this decision made? In effect an ‘offer they could not refuse’ was made by the SNP Government to only give cash to ‘good councils’ which signed up. COSLA leaders, some of whom had condemned just such blackmail over council house sales, browbeat their councils to fall into line. As a result investment was cut, services squeezed and ‘creative accounting’, including ALEOs adopted.

In issue 38 of SLR, we set out a series of policies which we felt the Scottish Government should adopt towards Local Government. These included allowing councils to “raise more of their expenditure locally”; “ring fencing of expenditure by the executive should be curtailed”; “councils should have a power of general competence”. The SNP has refused to return Non Domestic Rates to local authorities and by arm twisting stopped council tax rises. They have admittedly reduced ring fencing and made moves towards general competence. However, the expenditure restrictions have produced the above effects which have generally been detrimental to local democracy.

On the eve of the election, Glasgow gained a court order banning striking workers from picketing polling stations. The strike is over attempts by Culture and Sport Glasgow, now an ALEO, to cut wages. This, remember, is happening before the cuts in council revenue expected following the General Election. Of course the council no longer directly manages libraries, museums and sport centres! It is not responsible and wishes not to be blamed. Aberdeen council came close to bankruptcy in 2008 and has already been cutting services. Is this why rich businessmen feel a little bribery will work? Edinburgh and Dundee have both begun outsourcing in a short term attempt to save money. Under the ‘concordat’, councils cannot raise council tax and Non Domestic Rates have been cut by the Government. Like Greece, Scottish councils are in effect being told to slash services. I repeat – we did not vote for this!

Can We Fight the Cuts?

Campaigns have been successful in the recent past against individual school closures. But when all cities and councils are about to slash services and wages, what can we do? Certainly for once most public service unions are united in their resistance and are reaching out to the public. Their jobs provide our services. One demand must be to free councils hands – scrap the concordat and allow council to set their own Council Tax and Non Domestic Rates. Give them full powers of general competence to raise new taxes and to borrow for capital investment and allow council direct labour organisations being able to bid for non council work – one of the main reasons given for setting up ALEOS.

Rather than outsourcing services, bring them back under council control so that once more councillors can be held responsible for their decisions. Remove the compulsion to tender for in-house services thus saving significant costs of tendering. Draw up a charter for each city (and council) specifying what services we expect. Give voters the power to recall councillors if they breach manifesto promises.

Make the Scottish Parliament accept that it has a responsibility to fight alongside councils and not blame them and Westminster for service cuts. It is two years to the next local election, but only one year till Holyrood. Make local services a key part of that campaign.