Jan Bebbington explains how the Prosperity Without Growth? report shows just how damaging a growth-based economy is, but suggests that alternatives can work

The Sustainable Development Commission (SDC) is the Government’s independent advisor on sustainable development (SD), has a UK wide remit and undertakes three main activities: (i) scrutiny (providing an annual judgement as to the extent to which Government is pursuing SD), (ii) capacity building (within Government and its agencies to ensure that policymakers understand the demands of SD) and (iii) advocacy (using SD principles to come to positions on matters of importance). Prosperity Without Growth? is an example advocacy and was lead by Professor Tim Jackson who is the SDC Commissioner for economics and Professor of SD at the University of Surrey.

While it may seem inappropriate to be questioning the consequences of a growth based economy while we are in a recession, PWG? has been under development for some time and draws on an extensive array of workshops and detailed research to come to its conclusions. There are two main reasons for investigating how prosperity could be created without growth. The first is linked to the Stern Review. Stern suggested that if we trigger dangerous climate change the world will encounter permanent economic recession and as such Governments will have to find a way to secure the prosperity of their populations without relying on economic growth. The second reason for being interested in the link between growth and prosperity is the ongoing concern about the environmental consequences of growth. When these concerns are raised the ‘usual’ explanation for why we can continue to pursue growth is that we will decouple environmental impacts from that growth. In this way examining the rationale for growth is put off. PWG?, however, investigates the soundness of relying on decoupling and whether or not we have presently seen decoupling within the world economy.

Before moving to the line of argument proposed in PWG?, it is necessary to make two very important provisos with regard to the publication. First, the desirability of growth and the extent to which growth does drive prosperity differs between the so called ‘developed’ and ‘developing’ nations. The conclusions of PWG? do not hold outside of a ‘developed’ world context. The second proviso is that where an economy is driven by economic growth (as the UK is), de-growth does not lead to SD. For example, there is nothing to celebrate in the current recession in ecological or social terms. People losing their jobs, with the knock on impacts of this for communities across Scotland and the rest of the UK, is not SD. Likewise, rising energy prices may lead to reductions in fossil fuel demand, but if that leads to rising fuel poverty or the poor forgoing heating then once again SD is not achieved.

As a result, PWG? should be read as an invitation to take part in a conversation about the logic and consequences of a growth-focused economy and how, if we wish to pursue more sustainable forms of development, may that logic have to change. The chart on the next page summarises the line of argument of the publication and the rest of this article will explore elements of the argument in a little more depth.

PWG? starts its exposition by considering the ways in which human society, taken as a whole, is not prosperous and finds three areas where problems exist. First, in rich and poor countries alike, prosperity (as measured by conventional economic means) is highly stratified. That is, past economic growth has not lead to fairness and equity of outcome. Indeed, despite growth in the last few decades the gap between rich and poor nations (and the rich and poor within nations) remains and the desire for a ‘strong, healthy and just society’ (as per the UK’s SD Strategy) is unrealised. At the same time, economic activity has generated wide scale ecological damage both in terms of resource use and pollution impacts. These have combined to place a huge strain on the ecosystems’ ability to serve human needs (if one takes a human focused view – there are also non-human centred arguments for maintaining ecosystem integrity). Finally, as we have seen in recent times, our growth economy is also economically unstable.

PWG? also notes that even for the well off in rich countries prosperity (in terms of happiness) seems to be elusive. The Easterlin paradox illustrates this well: whereby subjective measures of happiness are not correlated to income, once income levels cross a certain threshold. Likewise, countries have very different wellbeing outcomes (for example, life expectancy and reported feelings of happiness) for the same level of income as well as different levels of income having the same wellbeing outcomes. This evidence suggests that wellbeing (and therefore prosperity) is not solely driven by income levels. Indeed, the report suggests that too much income can be dangerous to your health and notes the various afflictions of the affluent (for example, psychological ill health, excess drinking and eating leading to obesity, diabetes and alcohol related harm). PWG? suggests that the root cause of these interlocking sets of problems lies in the structure of our economic system.

The logic of our economic system requires growth for its stability and to achieve stability a particular dynamic must be present. First, in order for firms to remain competitive they must cut costs to increase profits, with the substitution of capital for labour being one route to achieving this. If this happens, however, unemployment will arise and the market for goods and services will shrink as people lack the means to buy things. As a result, there must be both new things to buy (thereby boosting output and keeping employment stable) as well as a good source of credit to enable people to keep on buying more things.

As a result, a growth-based economy requires a social logic that puts consumption at the centre of life with such a society being focused on the consumption of novelty. Likewise, indebtedness is required to keep growth going as well as allowing consumption. As we have seen, if this dynamic is disrupted the economic consequences (swiftly followed by social consequences) are severe. 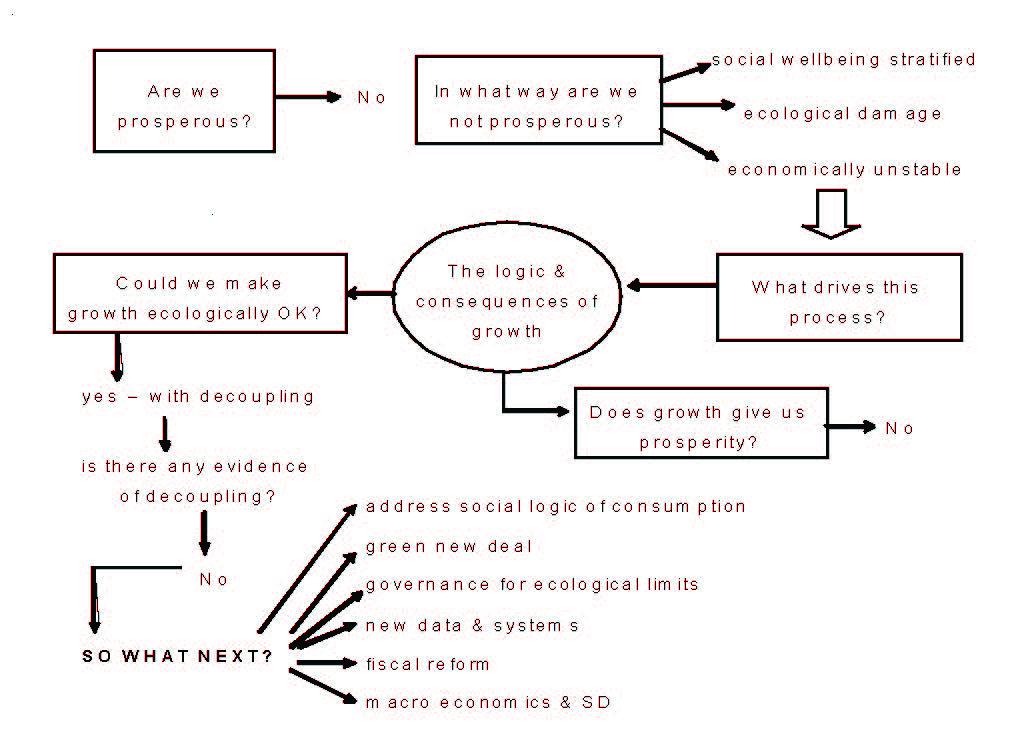 What is more, if the logic of a growth economy is combined with a desire to offer prosperity to all people alive today (and all those that will be alive by 2050) the level of absolute decoupling required is quite staggering. Hence both the moral principle of equality as well as that of seeking to be ecologically sustainable (the two core SD principles) are likely to be breached at some time in the future even if we obtain substantial decoupling of the economy. As such, we would argue that PWG? also helps us to think about what kind of future we might imagine for a world with nine billion human inhabitants.

The above conclusions then beg a number of questions, to which the bulk of PWG? is devoted to. As can be seen from Figure 1, six aspects are considered in the report ranging from ecological tax reform to re-thinking how we create meaning in our life. Space precludes a detailed exposition of these aspects here and each area is substantive in its own right. What was surprising, however, is the relative dearth of literature that attempts to explore some of the aspects being discussed in the report. It seems that we shall be collectively inventing our future if we are seeking prosperity without growth.

Indeed, PWG? is very much a start of a conversation. The SDC does not pretend that it has the answers for how a socially just and ecologically sound economy could be developed. This task is one that has to be tackled by society together. What we are convinced by, however, is that the question of whether or not growth (as conventionally understood) will deliver prosperity MUST be able to be asked. If society denies the possibility of questioning our current economic model then we will most definitely be in trouble: intellectually and practically.