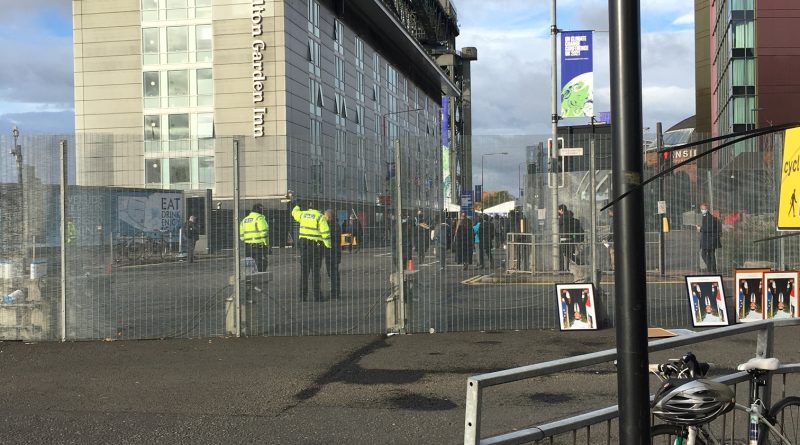 Below is an excerpt of a speech by Annie Morgan, speaking to the Climate Justice rally during COP26

This decade is the crucial time, possibly in the entire history of human existence of planet earth, for radical change in how our species exists in relation to the natural world. We face a ‘metabolic rift’ in terms of the ruination of ecosystems, largely through an economic system based on profit and out of kilter with the natural world on which our species and other species depend. This economic system, capitalism, is choking the planet. We also require a thorough change in the way political decisions are made within moves towards economic democracy. This economic democracy means economic growth must be challenged in terms of its production levels which lead to the over consumption culture driving pollution.

In North America, the work of the water protectors and pipeline protestors is a vital example of action and integral to ways in which we can share and shape radical international co-operation to effect change. Their achievements despite arrests, assassinations and imprisonments are encouraging. A recent report by the Water Protectors (North America) and Oil Change International shows that more than 25% of annual US and Canadian emissions had been stopped or delayed by resistance. This side of the pond, activists against preparation to open the Cambo oil field have forced a postponement. Trade Unions for Energy Democracy provides another other example of international action and solidarity.

In Scotland, reforming land use and ownership vital to how we encourage green jobs in regenerative agriculture and move towards more soil health and increased local production. Nearly 60% of rural land in Scotland is in private hands. Promises by billionaires to rewild their estates do not offset the environmental degradation involved in ‘fast fashion’. We cannot have any hope in ‘high financiers’ running country estates – even if they have been appointed by the SNP Scottish Government to influential advisory positions. The danger of putting companies in the forefront of mitigation cannot be overstated. It is a false hope to have dependence upon fossil corporations moving to a ‘net zero’ carbon emission age.

Since a post-extraction economy is a long way off, supporting workers in a transition to climate caring jobs, locally, nationally and inter-nationally in an ecologically based socialist transformation is the way forward. Climate caring jobs include looking after people, from nursery through to further and higher education. Many of these could be based around cooperatives and non-profit community led projects which do not contradict the concept of public ownership but could enhance economic democracy. Part and parcel of this would be participatory budgeting with unions, workers, unemployed workers, retired workers, those who cannot work, carers, and students as future workers deciding how the monies from public purse are spent. We could also create community campuses where older skilled workers can pass on their crafts to younger people and training in retrofitting and renewable energy can be explored and implemented. Energy which won’t cost the earth. For as the slogan goes: there is no Planet B so let’s get working on Planet A – A for alternative to this failed capitalist system!

The monetisation of fossil again?