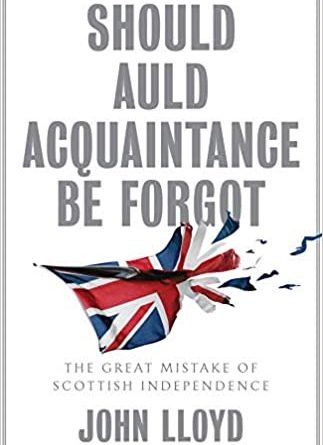 John Lloyd is a contributing editor for the Financial Times and describes himself as a ‘first generation British neo-con’. Born in Anstruther in 1946 and the son of a hairdresser, he went to Edinburgh University where he joined the Communist Party and became ‘a Stalinist’ in that milieu. Following the disintegration of the Communist Party, he left to join Labour and became a supporter of Tony Blair and his war in Iraq.

He makes a militant defence of the Union. His central thesis in his The Great Mistake of Scottish Independence is, by his own admission, ‘a trumpet blast in defence of Scotland’s Union with the rest of Great Britain’, where he asserts ‘the nationalists understate the economic risks of independence’.

Published before the Coronavirus pandemic, he says of the previous political crisis around Brexit that it is not the game changer the SNP would have us believe. The impasse at Westminster during 2018-19 exposed the Commons to widespread scorn, he argues, including those SNP MPs who wanted the referendum result overturned. A ‘reluctant Remainer’, Lloyd felt the resounding vote in Scotland was accentuated by a poor ‘Leave’ campaign and the lack of a proper debate north of the Border. Be that as it may, his book’s purpose is to rally the Unionist cause.

‘Since the SNP took power in 2007 Unionists have been on the defensive’ he regrets. He argues the SNP’s claim to a ‘golden economic future’ outside the UK is based upon spurious facts, figures and assumptions. The Barnett Formula provides a rich subsidy to Scotland he argues – worth £10bn per annum – and this is how we have free tuition, free prescriptions and free personal care when England does not.

But ‘The economic case for independence is shaky’, insists Lloyd, citing low productivity, few exports and the illusion of Scandinavian style public services on Singaporean tax rates. His critique of Andrew Wilson’s Sustainable Growth Commission produces, unsurprisingly, agreement on the economic threats reached by the two neo-cons. Lloyd’s admiration for Wilson’s ‘realism’ does not prevent him, however, from delivering the withering conclusion – that it is Scotland’s austerity programme. Lloyd is not alone in seeing that prospect from Wilson’s plan.

The Scottish Socialist Party has repeatedly warned our allies in the ‘yes’ campaign we will not win a majority by hawking neo-liberal policies round the doors of working-class Scotland. Lloyd does accept that the present constitutional arrangements cannot hold and favours the federal constitution laid down by The Marquis of Salisbury in the House of Lords. His Act of Union Bill 2019 sees power devolved to four national Parliaments with a separate UK legislature dealing with macro-economic policy, relations with the EU, foreign affairs and defence similar to those arrangements operating in Germany and Canada. This idea is not new, of course, and the problems facing it have been well rehearsed. Not least is the complete lack of interest in the idea in England.

Nonetheless, Lloyd perseveres since, he argues: ‘Two rashly conceded referenda thoughtlessly overseen show Westminster must have more faith in its own rights and duties to good governance. And it must be militant in its defence of the Union’.

An admirer of the tactics employed by federalist supremo, Stephane Dior, during the 1995 Quebec referendum which he believes ‘showed that sharp, informed argument can undermine the rhetorical tropes of the nationalists’, Lloyd is at his most belligerent when insisting any future independence vote cannot be decided merely by those who live in Scotland. No, he wants the franchise extended to include not only the 850,000 expat Scots ‘who intend to come back and live here one day’ but the rest of the UK too!

Here we see the ‘Stalinism’ Lloyd was famous for during his days in the militantly unionist Communist Party of Great Britain. He insists UK voters must also have a say on the matter since it threatens ‘their Union too’. So much for the democratic principle adhered to by both sides in 2014 that Scotland has the right to decide its own future! Lloyd even offers up GK Chesterton’s poem ‘The Secret People’ to advance his case including the rather ominous lines: ‘But we are the people of England, and we have not spoken yet’.

Realising that he is on shaky ground, Lloyd backtracks, but only a little: ‘British citizens as a whole should be included with a voice rather than a vote’. Returning to his main theme he concludes: ‘… the nationalists have not prepared the Scottish people for secession and have based their case on an assurance independence will solve all problems and raise all boats’. Rather contradictorily, he fears ‘Independence may be Scotland’s fate’. But ‘yes’ supporters ought not to fall into this newspaperman’s trap.

I, for one, am nowhere near as convinced as he purports to be about the imminence of independence. The ‘yes’ movement retains only minority support and is experiencing much difficulty at present; stymied on a legally binding second referendum, befuddled by the blunder of allowing a mass movement to become a single party, facing an uncertain political landscape after the Covid-19 pandemic and the innate conservatism of the SNP who, in turn, face an incipient civil war. None of this gives independence supporters reason for optimism about the immediate future. Lloyd’s militant proposals should not, therefore, deflect ‘yes’ supporters from addressing our own challenges. For those require greater attention and wiser strategies than hitherto if we are to prevail.