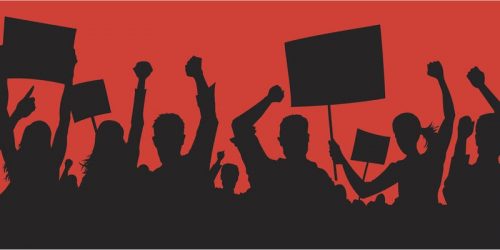 Institutional power no longer delivers for citizens. It always struggled to do so but did so much better before. The ‘golden age’ of representative democracy in Britain was probably the post-war consensus, one brought about by recognising sacrifices made by millions of working-class people in war, their unwillingness to accept the status quo. The British state bent to popular interests. Since then, the state and political parties have broken almost all ties with the citizens. The structures that connected them – mass political parties, responsive local government, civil society, unions and so on – have declined or been dismantled to such an extent that the political classes float free of the electorate, connected only very loosely and distantly by an electoral system failing to equate votes cast with representation.

Where stands Scotland here? Scotland is different in that the current and longstanding governing party has been part of a social movement in the shape of the independence campaign. As power and influence hardly ever enjoy being fettered, there are ongoing attempts by SNP politicians to shake off the ‘Yes’ movement and party democracy despite these being the main connections back into the lives of the people they should be acting for. What can be gleaned from this is the constraints and counter-balances that social movements place upon political parties are vital in ensuring parties cannot be overly influenced by elite groups – such as the ‘corporate lobby’ or professional-managerial class – seeking to access state power to protect and advance their own narrow interests which often conflict with those of the wider population.

Add to this the most profound revolution in how information is communicated so institutions of government find it hard to evolve anywhere near rapidly enough to keep up. This would be true even if they were not largely conservative in defence of hierarchy and privilege connected with the British state. One approach to these pressures on the proper functioning of democracy is to ‘reinforce the citadel’, namely, recentralise power back to the centre by dint of Boris Johnson’s authoritarian populism. The Scottish Government is at least trying to open up an alternative route with a flirtation with citizens’ assemblies. Though we need the state on our side, we cannot become dependent upon it. Consequently, we need a movement built upon the interests of local causes and communities linked together by unions, insider activism within the state, local and national, and community campaigns and organising. This would be the beginning of a means to claim the state for its citizens and to institutionalise new forms of democratic control.

Here, and some fifty years on from the UCS work-in, unions look very different now. Now in Scotland they have been transformed from being predominantly skilled, male and industrial to being dominated by public sector women workers delivering essential services. They are winning victories utilising both industrial power and widespread community and service-users support, with levels of membership having now stabilised and union density in Scotland remains higher than the UK average.

While the workplace remains the unit of most union organising, the practice of the community of solidarity is of increased importance where a more feminised workforce in care work, health and teaching extends across all of society. We’ve seen this in the 2018 Glasgow equal pay strike, 2017 janitors’ strikes, and 2018 teachers’ pay dispute. Linking workers’ power in the workplace directly to the communities they serve as well as getting them active in their communities as parents, carers, members of churches, political parties and community organisations means every worker can find solidarity in their community and build power in their community to bring about change.

Moving on from unions, popular participation in local representative democracy is essentially limited to voting in periodic elections. For most, that is the beginning and end of their encounter with local democracy. The next five years see the small band of elected representatives agree budgets, set priorities and decide the political direction in our winner-takes-all democratic marketplace. The model is transactional: a vote is traded for a promise. There is no collaborative decision-making, no participatory process and no transfer of power to communities. Disempowerment follows as decisions about key public services are taken without recourse to those who voted and rely on these services. Yet a Scottish Government review of local democracy told a different story where submissions showed people want more control of decisions on issues that matter to them.

The absence of formal structures and resources – in the form of institutions – to facilitate challenging decisions and initiate positive changes has not prohibited communities taking action. Across Scotland, local people have acted collectively to stop school closures, defend community centres, halt demolitions, demand better bus services and take ownership of local buildings no one else wants. The commitment and tenacity required to succeed cannot be underestimated as communities have to navigate opaque bureaucratic processes without formal training, knowledge or support. The measure of successful campaigns is not entirely objective for the process of engagement, building capacity, knowledge, confidence and agency of those involved is a powerful legacy even when campaign aims are not fully achieved. And, the power created when individuals work collectively, and ideally with other working-class organisations, to make change can resonate beyond local boundaries.

Edinburgh council was forced in 2012 to abandon plans to privatise over 2,000 jobs after ‘Save Our Services’, a csommunity campaign led by groups of local women combined with UNISON’s local government union branch. The decision also halted the council’s ambitious project to sell their outsourcing model, developed a cost of £4m, to other local authorities. Marshall Ganz outlined as strategy of turning the resources possessed into the power required to achieve goals. This model of leadership and community organising focuses upon creating a shared commitment, story and structure to distribute power and develop leaders.

So, when faced with a proposal to demolish a much-loved red sandstone building on Leith Walk, Edinburgh, and build six stories of mixed accommodation, mainly student flats, the local community responded with anger and hostility. Careful campaign management ensured from day one the opportunity to build power to make change was central. The usual format of ‘listen and leave’ meetings were replaced with network building sessions to agree shared objectives, examine where power lay, identify skills and agree tactics. There were no committees or rigid structures and the inevitable rise of informal hierarchy was acknowledged and kept in check. The ‘Save Leith Walk’ campaign successfully stopped the demolition and forced the developer back to the drawing board, utilising community organising tools, consensus decision-making and distributed responsibility to develop capacity, agency and ambition of local citizens resulting in a crowd-sourced alternative plan for the site and a bid for a community buy out.

Communities have the ability to create institutions of power that can influence outcomes and deliver positive change. Yet such campaigns are usually temporary and in response to outside agents which have objectives contrary to local needs. Creating a fairer Scotland which represents the aspirations of local communities requires new institutions and methods to shift structural power and devolve decision-making to those most familiar with impacted services, place and space. Community organising as both a method and movement is key to this. It is a challenge to local authorities and national government to replace the talk of community empowerment and invest in a sustainable community organising movement that creates networks of trained community organisers. Local democracy thrives when people can see a strategy for transformation in their communities, and their central place within that process.

So, how can local politics can be reconfigured to allow for this empowerment? We already have in Scotland an impressive narrative surrounding community empowerment and engagement, and the pandemic highlighted the value of community responses as well as the need for networked approaches to tackling the crisis. But to generate resilience and well-being, engagement and participation needs to be ‘built into the bones’ of how we do politics in Scotland.

Innovative practices such as citizens’ assemblies and participatory budgeting have been readily adopted by the Scottish Government. Participatory budgeting is now being institutionalised by all local authorities in Scotland. This offers citizens the chance to decide how local funding should be spent, which has the potential to change the relationship between communities and institutions. The Scottish Government hosted two citizens’ assemblies on the future of Scotland and on climate change. Instead of polarisation and conflict generation, these processes managed to facilitate consensus from differing ideological perspectives on issues of social justice, tackling poverty and health and wellbeing. How the Scottish Government will implement so many policy recommendations, given the danger of cherry-picking those which suit their agenda whilst appearing to take the recommendations seriously, remains to be seen.

These innovations require committed actors, participants, organisers, facilitators and experts to enter into a laborious and time-consuming process. Citizens’ assemblies and participatory budgeting moved online during Covid which was daunting given the previously perceived importance of face-to-face interaction. Yet, this move appears to have been successful, allowing organisers and practitioners to flex their muscles using digital innovations and change the face of democratic innovations for the future.

From this, we can see that beyond electoral politics the desire of citizens to engage exists and that decision-making can be made legitimate. Similar attention has been paid to community engagement. In addition, people can be offered a greater stake in their community through community ownership and development trusts. Asset transfer is a key component of the Community Empowerment (Scotland) Act 2015 and the Scottish Government further supports this venture with the Community Ownership Support Service. Ownership of assets can help empower communities by making them stakeholders and decision-makers. We are at an early stage so it would be wrong to prejudge the outcomes of these various initiatives and innovations. But at least a course is being set out upon.

For democratic and participative innovation to penetrate local levels and connect the local to the national, we have to think more carefully about embedding and institutionalising these initiatives and innovations into a dense network of inter-linkages that take many forms involving people as workers and as citizens. This would include issues of form and shape like utilising referenda or our upskilled citizens to become advocates for activism in their local areas. Whatever form this takes, this will require investment in the lives of communities and people. If citizens are struggling to live, political participation is not a priority for them. Good practice must be linked beyond standalone processes and one-off innovations. Innovative practices such as citizens’ assemblies and participatory budgeting need to be linked with local initiatives. The media also has a role to play in publicising participatory processes and reporting its outcomes. Public engagement must be built into the decision making-process beyond consultation and deliberation so that it includes the implementation and evaluation stages of the policy process.

Lynn Henderson is convenor of the Jimmy Reid Foundation Project Board. Ruth Lightbody is a lecturer in politics at Glasgow Caledonian University. Linda Somerville is a Deputy General Secretary at the STUC. Willie Sullivan is a campaigner and works for the Electoral Reform Society as the Senior Director.