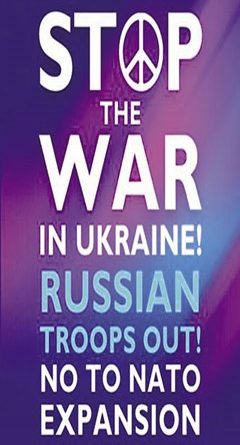 Arthur West argues that double standards have outflanked diplomacy but peace can be secured.

The tragic war in Ukraine has caused considerable suffering and loss of life. It’s appropriate to positively acknowledge the support many people across the country have given to humanitarian appeals supporting people in Ukraine affected by the conflict. It has also been impressive to see members of the public and organisations offer to house refugees fleeing the conflict. This is despite the UK Government taking minimal responsibility for coordinating efforts to get refugees into the country as quickly as possible. Hopefully, a stable ceasefire and peaceful long-term solution to the conflict can be found in the near future. It also seems important to examine some of the issues which have come into sharp focus as a result of the war in Ukraine. It will be the job of the peace movement in Scotland and the UK to argue that the legacy of the war in Ukraine should be a peaceful and diplomatic approach to resolving tensions between countries and political blocs. In today’s troubled world the sane and rational voice of the peace movement is needed more than ever. It seems the Ukraine War means that the following issues require reflection.

The first is Britain’s automatic support for US foreign policy. In the run up to war and since, Britain has slavishly followed the US position. By contrast, some reports suggested that Germany and France were taking the view that diplomatic and political approaches to resolving tensions with Ukraine were their preferred options. In Germany’s case, the main reason for this was because they did not want to jeopardise the Nord Stream 2 gas pipeline which would have pumped Russian gas directly into Germany. In the case of France, it was anger over the Australian-UK-US nuclear arrangement which saw the aborted submarine deal between Australia and France. So, at the end of 2021 and beginning of 2022, there was good reason to think about Britain to aligning with Germany and France in seeking a diplomatic solution to the situation in Ukraine rather than following in behind the US.

We’ll never know if aligning more closely with German and French approaches would have prevented the war. And, we now have the depressing sight of Germany committing more funds to military expenditure and both Germany and France publicly aligning themselves with the US and Britain. Germany now also appears to have dropped its policy of not supplying weapons to conflict zones and has agreed to supply Ukraine with surface to air missiles and anti-tank weapons.

The second is the double standards at play. At a recent Stop the War Conference, Jeremy Corbyn said that the concern for Ukrainian refugees and support for people affected by the conflict should be given a positive welcome. However, he also observed that equal amounts of public concern and support would be welcome for victims of the war and conflicts in places such as Palestine and Yemen. While the Tory Government seems anxious to raise awareness and encourage action in relation to Ukrainian refugees, at the same time it is trying to develop a scheme to send refugees to Rwanda. MPs who speak out about the conflict in Ukraine are in some cases part of Friends of Israel groups. So, while speaking up for the people of Ukraine, they appear to be uncritical supporters of Israel – a country recently described as an apartheid state by Amnesty International.

And, Saudi Arabia, supplied with Britain and American arms remains embroiled in an eight-year war in Yemen. Saudi-led military action and a Saudi-led blockade have created a disastrous humanitarian situation. Unlike Ukraine, very few Yemenis are able to flee the war. There were some 3.6m displaced people in Yemen in 2020 and the World Food Programme estimates at least half of Yemeni children under five years of age – 2.3m kids – are at acute risk of malnutrition. The UN estimates 377,000 deaths have occurred, with the main cause being malnutrition. It seems inconceivable a Western ally responsible for so much suffering has still not been sanctioned.

There are also double standards at play in relation to calls to deal with Putin for breaches of international law. The International Criminal Court was set up in 2002 to investigate and, where warranted, try individuals charged with crimes relating to areas such as crimes against humanity and genocide. It is a permanent institution and it can investigate crimes submitted to it by the UN Security Council. It can also investigate crimes by nations which have signed and recognise the Treaty which set up the International Court. But Russia, US, Israel and Sudan, despite signing the Treaty, say that they will not abide by its jurisdiction.

The third concerns attitudes to, and treatment of, refugees. The public’s supportive response to Ukrainians seeking refuge has been very positive. It hopefully provides a way forward for building on a permanent basis a more compassionate approach to asylum and refugee issues. However, the Tory Government continues to be insensitive on matters relating to refugees and asylum. There is mounting evidence that those fleeing have been met with bureaucracy and delays when trying to get to Britain. This government is also taking minimal responsibility for co-ordinating the details of the sponsorship scheme announced by Michael Gove.

The Refugee Council has criticised the Government’s response to Ukrainian refugees as mean spirited. However, it is not only in relation to dealing with them that the Government is mean spirited. Proposals to send some asylum seekers to Rwanda and Government attempts to continue with their ill-advised Nationality and Borders Bill do not give any suggestions that the Home Office will display any humanity and compassion any time soon. Facilities could be provided at embassies and consulates at countries of origin and at channel crossings and, following the charity, Safe Passage, new safe routes for people seeking asylum could be opened along with a new relocation scheme for unaccompanied children. Safe Passage research showed that of the 12,248 unaccompanied children granted protection in Britain between 2010 and 2020, only 700 arrived through official government schemes. Most were forced to travel irregularly to find protection, often in the back of lorries.

The fourth concerns ways forward towards peace in Ukraine. Peace movement organisations have made the point that the break-up of the Soviet Union represented a missed opportunity to foster peace and co-operation in relation to European security. George Roberson, former NATO General Secretary, recalled Putin actually asked him about Russia joining NATO in the early 1990s. Dan Plesch, professor of diplomacy at the SOAS, University of London, also said: ’The Soviet Union managed a relatively peaceful end to empire, which is almost unprecedented and for which they go no credit’. Declassified documents maintained by the National Security Archive at George Washington University show a pattern of promises US negotiators made to their Russian counterparts in relation to not expanding NATO in Eastern Europe. That said, debates about the causes of the war and NATO expansion will not address the current suffering of Ukrainian people.

Dy drawing on recent statements made by Scottish CND and the Movement for Abolition of War, the following steps as a way forward to delivering a peaceful solution to the war in Ukraine seem sensible:

Arthur West is the former chair of Scottish CND

Movement for the Abolition of War – https://abolishwar.net/