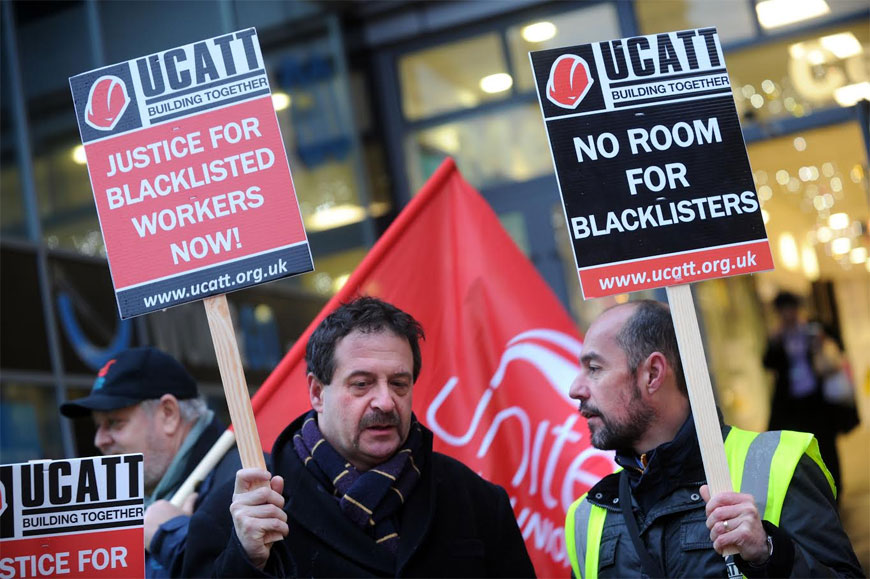 In January this year, the UCATT construction union became part of the Unite family. I know the decision to merge was a difficult one for many UCATT members, but we are proud to now be the biggest construction union in Scotland. We are strong, united, and looking to the future. That future is one where construction workers get fair pay, decent working conditions, respect at work, and a safe working environment.

And there are too many employers with managers who think they’re still living in the days of the Victorian gangmaster. Many of those employers are known blacklisters – companies who went out of their way to ruin the lives of workers who had done nothing more than stand up for their legal rights, and the rights of their workmates and colleagues. Shamefully, many of those companies are still benefiting from Scottish Government contracts – being handed public money without giving any guarantee that their blacklisting days are over.

Laing O’Rourke is the main contractor for the construction of the new Dumfries and Galloway hospital. It has repeatedly blocked unions from getting full adequate access to the site to make sure workers are properly organised, represented and protected. When the First Minister visited the site in January, she publicly praised the company for exceeding its job creation targets, but said nothing about its anti-worker actions. That was incredibly disappointing.

It’s also disappointing that the Scottish Government’s flagship construction project – the building of the new Queensferry Crossing – has been marred by the use of umbrella companies to stop workers getting the proper rate for the job. There is evidence that foreign workers were being exploited on the project – brought in to work illegally for low wages. And when unions raised the matter with the Transport Minister, the pay audit that was put in place alongside the conciliation service ACAS only looked at those workers who were still on the project – not bothering to look at the treatment of those workers who had already moved on to other jobs.

If this is what is happening on major government contracts – where companies are supposed to be operating along the principles of the Scottish Government’s Fair Work Framework – it’s a certainty that things will be even worse on other private sector sites.

So what can we do? Unite’s officers, stewards and health and safety reps will continue to watch companies like a hawk. Where we find bad practice, we’ll use every legal and industrial means at our disposal to stand up for our members. But we also want to stop bad practice before it starts. Last year, Renfrewshire Council and North Ayrshire Council signed up to a new Construction Charter. Construction firms who want to get work from these councils now have to agree to work to the Charter. It includes a pledge not to use bogus self-employment schemes, and a clause encouraging firms to become registered Living Wage Employers. Companies must also certify that they have not engaged in blacklisting workers for any reason.

The Charter will make sure that health and safety standards are rigorously implemented and adhered to. Companies will be expected to promote and improve opportunities in education and training, so that local people can help fill the construction skills gap and learn for the future. Companies should also promote and encourage full apprenticeships for local young people.

Any company found to be in breach of the Charter could have their contract taken off them, and not be eligible for new contracts in the future. This is a welcome step in the right direction. Now that the Charter has been agreed in Renfrewshire and in North Ayrshire, we will be pushing for other public bodies across Scotland to follow their example, including the Scottish Futures Trust – the Scottish Government agency that is bringing private finance into public construction projects.

Construction workers are the backbone of Scotland. They have created every road, bridge, tunnel, school, home, hospital and workplace. We owe them immense respect. And Unite will fight to make sure they get it.

Pat Rafferty is the regional secretary for Unite in Scotland