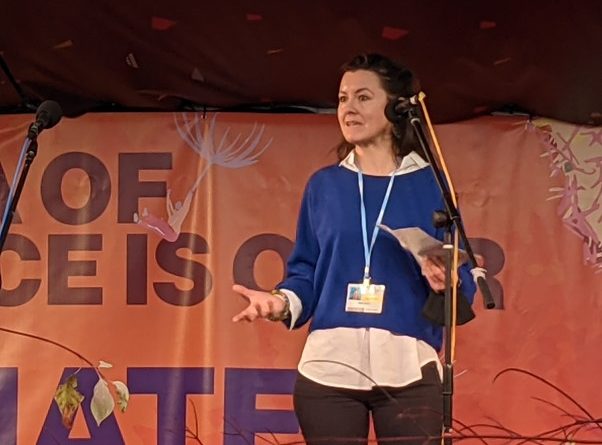 Despite the IPCC’s ‘code red’ warning and the grim reality that without deep, systemic changes, we will hit the critical 1.5o Celsius threshold within the coming decade, those most responsible for causing the climate crisis came to Glasgow with pretty much nothing new in terms of how to solve it. As a result, the Glasgow Climate Pact (GCP) offers nothing but a few process hooks to cling onto for next year’s negotiations.

What needed to happen in Glasgow to unlock the long-term tensions at the heart of the UN Framework Convention on Climate Change (UNFCCC) process was for rich historical polluters, including especially Britain as holding the COP Presidency, to come to the table with the political will and concrete policies to undertake their fair share of climate action. This means nations that have done the most to cause the crisis – the industrialised nations of the global North – cutting our emissions deepest and fastest, leaving what very little atmospheric space remains to poorer countries to have a bit extra time to decarbonise as they develop their economies. It also means paying the substantial carbon debt we owe to countries on the frontline of the crisis in the global South through climate finance and other forms of support. This is not wild idealism; the principles of equity and ‘common but differentiated responsibility’ are enshrined in international law under the UNFCCC and must serve as a guide to global co-operation on the crisis.

Instead, what we saw at COP26 was the US, EU, Canada, Australia, Japan and Britain continuing the pattern we’ve seen over the past decade of trying to shift the burden of responsibility for solving climate change onto the shoulders of the poorest. The British Presidency is not alone in spinning the GCP as a success, claiming the talks succeeded in ‘keeping 1.5oC alive’. Simply repeating the words without any action to get there is worse than meaningless, giving the illusion of momentum where there is none.

Take, for example, commitments to bring emissions down, and concrete policies to meet them. Pledges submitted by parties to the Paris Agreement ahead of COP26 put the world on track for 2.4oC warming, though policies to meet them take us to 2.7oC. Hailed by many as proof the Paris Agreement is working – since these numbers are a marginal improvement on the last round of pledges – the fact remains that even 2.4oC is far, far beyond the 1.5oC threshold, more than enough to fry the planet and trigger tipping points that could cause climate change to spiral out of control.

Instead of inspiring confidence that even these targets would be met by committing to the sort of policies and actions that we know are needed – phasing out all fossil fuels, for example – governments pushed through rules on carbon markets riddled with loopholes that allow themselves to keep polluting while giving the appearance of acting. Fossil fuels did make an historic appearance in the GCP text but the emphasis on coal puts the greater onus on poorer countries, letting richer countries off the hook in terms of their climate trashing oil and gas expansion plans. Shamelessly, the Biden administration wasted no time in launching a huge licensing round in the Gulf of Mexico days after the summit closed, while the UK has 40 fossil fuel projects – the vast majority of which are oil and gas – in the pipeline for approval by 2025.

Then take the issue of climate finance, which is vital to help global South countries deliver their own climate plans – both reducing their own emissions and adapting to impacts of climate change – and, therefore, vital to engendering trust at the negotiation table. At the Copenhagen summit in 2009, global North countries promised to deliver $100bn pa by 2020, split 50:50 between mitigation and adaptation. That target – which was plucked out of the air, not based on any actual analysis of what was needed or owed – was not met in 2020. Days before COP26 opened Alok Sharma presented a delivery plan to meet the totally inadequate missed target only by 2023. At the talks themselves, global North countries refused to countenance poor countries’ proposals for a proper process to determine a new long term finance goal, while on short term needs the GCP does little but weakly ‘urge’ developed countries to deliver on the $100bn goal, and balance finance between mitigation and adaptation.

Also take ‘loss and damage’. It is a concept that recognises that it is no longer possible to adapt to all of the impacts of climate change, whether the human and economic losses from repeat thrashings of extreme weather events, or indeed the loss of whole communities and nations when parts of the world become uninhabitable as a result of sea level rise or extreme heat. Poor countries were powerfully united at COP26 in their demands for financial support for loss and damage – support they would likely not have needed if rich countries had acted on emissions sooner and delivered the finance they owe. But rich countries played a dirty game, pushing discussions into and out of various negotiation strands, with the US ultimately (and not for the first time) blocking any meaningful progress on this front. Instead of committing to finance or any other support for loss and damage, the GCP establishes a process for dialogue: let’s talk about your house burning down for next three years instead of actually helping you to rebuild it after some of it has burnt down.

Hope, then, is clearly not to be found inside the UNFCCC process at present, nor in the outcome of COP26. Even the plants in the Scottish Exhibition Centre (SEC) were dying only half way through the summit. But where hope does lie, and was in abundance during the fortnight of the talks, is in the movements organising around the summit for a climate just future.

Each day on the streets of Glasgow saw people taking action to send a clear message about what’s needed to turn the climate crisis around, from protesting the new oil field at Cambo to demanding free public transport, to solidarity on the picket lines with striking refuse workers, and marching with migrant justice groups. Over 150,000 people came together in the biggest climate march ever in Britain, a march that was visibly and powerfully led by Indigenous and frontline communities, while a further 300 actions around the world including 80 in Britain took place. Daily movement assemblies on climate justice thematics were a space to connect and learn from different struggles. A Peoples’ Plenary was held inside the SEC, condemning the failure of world leaders to step up to their responsibility and bringing together collective demands to turn the crisis around, temporarily transforming the main COP26 plenary room into a space of hope, where the real solutions to the climate crisis were articulated and celebrated.

All this activity did not just happen spontaneously. It happened because we have been organising together for the past two years across NGOs, youth, unions, faith groups, migrant and racial justice groups, direct action networks, climate justice groups, under the umbrella of the COP26 Coalition to deepen our understanding of the drivers of the climate crisis and help shape the narrative around what needs to happen to turn it around. Organising to build a strong and diverse movement of movements that recognises the root cause of the climate crisis is an economic system which is also driving multiple other injustices we are struggling against – poverty, racism, sexism, nature destruction to name but a few – and that only by coming together can we hope to make the change that we need to see happen.

Now that COP is over, after some time for rest and reflection, our job is to build on the momentum and possibilities that organising around a summit of this kind creates in the host country and city. The greater understanding of what is at stake that comes from having to engage with a thing like COP26, not just in civil society but also in the media where so much of our influencing work takes place and the political spaces in which we do our advocacy, means the landscape we are operating in is transformed. We can dare to demand and hope for the transformative policies we know are needed to calm this crisis down. Crucially, we must actively bring into our work a new or revitalised awareness of the global injustices at play in the climate crisis and ensure the solutions we organise and advocate for here in Scotland do not further exacerbate these. If it wasn’t already clear before hearing from frontline voices in the various spaces around COP26, a transition for the global North that relies on continued exploitation of Southern resources, and fails to do our fair share of climate action, is not a just transition at all.

What that means concretely here in Scotland is forgetting about the longer-term climate targets and focussing on bringing emissions down sharply over the next decade. A true fair share of climate action here in Britain looks something like a physically impossible 200% reduction in emissions by 2030. More realistically that translates into zero by 2030 plus £1tn climate finance: the longer it takes us to reach zero, the greater the climate debt we owe.

It means building on the successes of the formidable Stop Cambo campaign which has, in a matter of mere months, leveraged the hosting of COP26 to first turn around longstanding Scottish Government policy on drilling every last drop of oil and gas from the North Sea, then cause Shell to pull out and private equity backed Siccar Point to shelve the project. There are a further 36 oil and gas projects and 3 coal projects in the planning, none of which can be allowed to go ahead if we want a climate safe future.

It means the forthcoming just transition plan for the energy sector must move beyond government rhetoric and come up with concrete policies and finance for delivering decent green jobs here in Scotland, with support and protection for workers and communities as regional economies inevitably go through significant changes. It means politicians no longer listening to oil and gas bosses and looking clear-eyed at the timescales and maths of the tantalising – but ultimately false – solutions of carbon capture and storage and hydrogen being touted by industry. The corporations who have knowingly got us into this mess have no place in getting us out for it, other than stumping up the funds to help.

We are way beyond the low hanging fruit of emissions reductions. It’s time for the difficult decisions and transformative policies, the ones that can both save our skins and make the world a better and more equal place in the process.

Mary Church is Head of Campaigns at Friends of the Earth Scotland (https://foe.scot/)