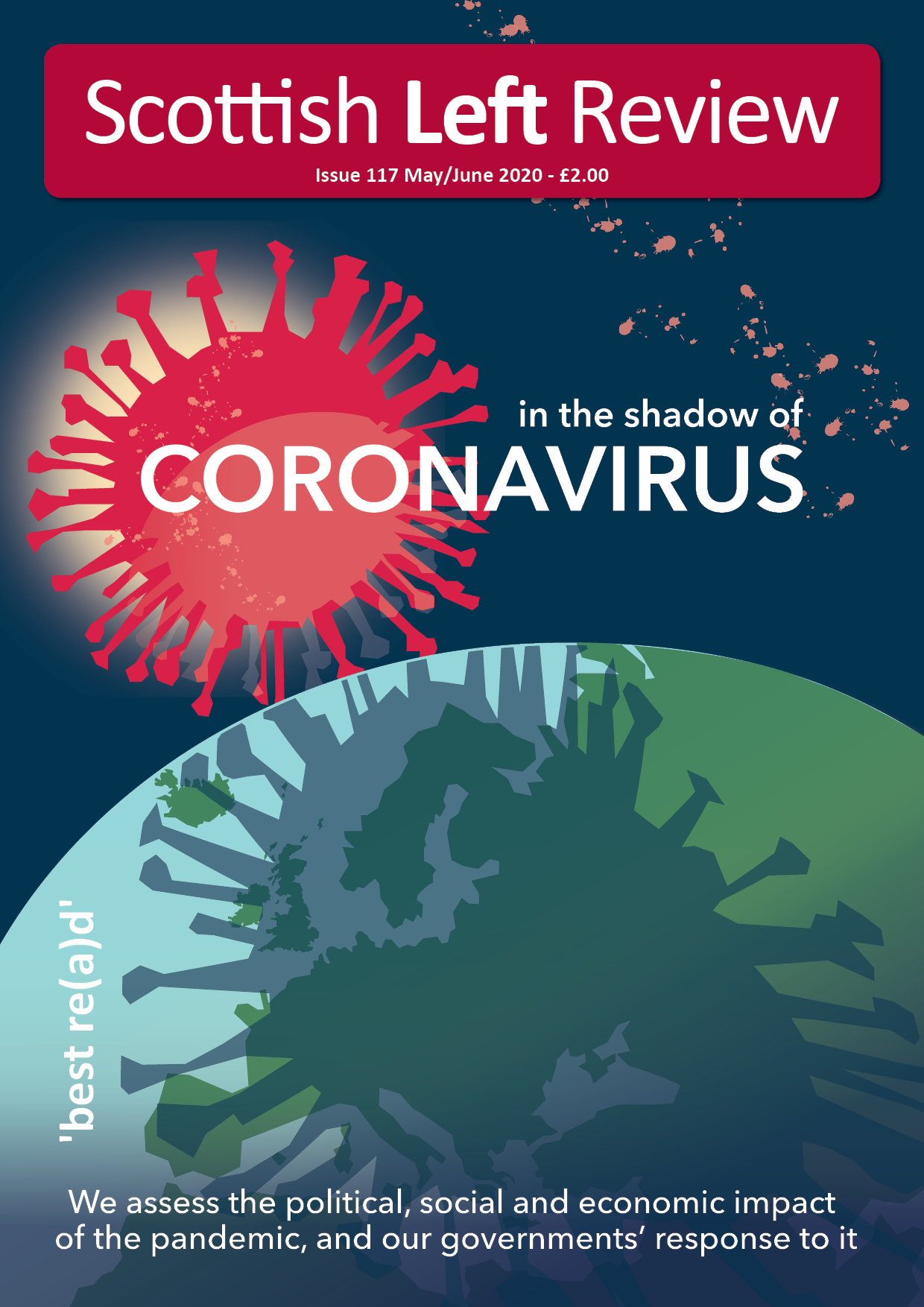 Editorial: ‘Strange times, indeed. But maybe not that strange’.

As Shakespeare’s dark and dystopian verse seems to be commonly quoted in these strange times, I’m reminded of Macbeth’s statement in Act 1 Scene 3: ‘Nothing is but what is not’. So, we have a populist, right-wing and neo-liberal Tory government engaging in the biggest bout of state intervention in living memory. Massive state aid to business and workers as well as restrictions on people’s movements. A veritable Marshall Plan! Labour bailed out the banks but the Tories rescued the workers. It’s enough to have put Corbyn to shame, some say. But is it all it’s cracked up to be as a spectacular volte face?

Scratch beneath the surface a bit and you soon find out that pithy sound bites from the likes of Chancellor, Rishi Sunak – ‘the NHS will get whatever it needs’ – and Boris Johnson – ‘we’ll do what needs to be done’ – are not worth the paper they were not even written upon. Quite apart from the ineptly and incompetently slow response to the spread of the virus – with the whole month of February wasted – it’s not hard to see that ‘Nothing is but what is not’. First, the amount of businesses eligible and able to access the emergency funding has proved to be tiny – so jobs and livelihoods are on the line or already gone. Second, it’s up to employers to decide whether to furlough their workers and although 21% of workers in organisations continuing to trade have been furlough, large numbers have simply been made redundant. That’s on top of those who were not eligible to be furloughed and the many (but not all) self-employed workers. Third, the combined effects of the market and austerity rampaging through our public health care system for well over a decade have been brutally exposed by lack of testing facilities, personal protective equipment and the like. You’d think that either the recent SARS (severe acute respiratory syndrome) and MERS (Middle East respiratory syndrome) epidemics had never happened or that they had never given rise to any thoughts in the senior levels of government about making emergency preparations for any such further epidemics (or even pandemics). Indeed, the Tories ignored the scientific advice in case of an expected pandemic from the 2016 Exercise Cygnus emergency planning report (especially regarding medical stocks). So, it was an act of utter hypocrisy to stand on the steps of No 10 Downing Street clapping for carers while denying them the most basic of equipment to try to protect themselves and those they care for from the virus.

In Scotland, our health service is fully devolved and financially autonomous. If we condemn the Westminster government for its tardiness in relation to testing and PPE, then is it not the case that the Scottish Government should also be held accountable? Did it allow the British government’s advisors to direct Scottish policy or did they use their own scientific experts? Whoever they used, we ended up in the same position as the health service in England – not enough testing and not enough PPE. The Scottish Government had the (devolved) powers to move in a different direction. It was the hapless Catherine Calderwood who told us that testing was a diversion. One wonders about the judgement of Scotland’s former Chief Medical Officer on this and other matters, but also that of Nicola Sturgeon in trying to keep her in her job. This apart, the Scottish Government has had a remarkably easy ride from the media and have faced little political opposition over its handling of the crisis. Partly that is because Nicola Sturgeon and Jean Freeman have come across competently at press conferences and in parliament. But perhaps it is time for more scrutiny of the mistakes that have been made as the lockdown and its consequences continue.

If we look elsewhere, we can see again that political choices about how to respond and regulate have been made. Bearing in mind that not all countries are at the same stage in the pandemic, deaths as a proportion of coronavirus cases – a relative measure – still vary quite widely. Of comparable sized countries, Britain and Italy are at 13%, France at 18%, Spain at 10% and Germany at 3%.

Notwithstanding all the failings from Westminster and Holyrood above, the level of state expenditure now shows that austerity really was a political choice and not an economic necessity. The current intervention was brought about by political pressure on the government – not that it necessarily came from the left. It was slow and grudging because all throughout this crisis – and no doubt until it ends and well beyond it too – the response of those that are in the Westminster government has actually been one of a reluctance to deploy state intervention because it goes against their fundamental beliefs of letting the ‘free market’ be free. Our on-theme articles in this issue lay out the various aspects of this historic culpability in chapter and verse. There can be no ‘one nation’ Toryism nor any ‘national unity’ between different classes when one treats the other with such contempt.

That said, there are some even bigger issues at stake. Three of the most obvious ones are: what the crisis says about capitalist society, what’s happening to the workers’ movement, and what the crisis says about throwing alternatives to capitalism. That a whole world economic system can be thrown into jeopardy by a reduction in the levels of activity shows up the fragility of such as system and that its drug of choice is nothing other than the pursuit of profit.

If the global financial crash of 2008–2009 is any guide, then it will take a long time for some groups of workers to regain any bargaining strength they might have had due to economic growth being weak and fitful. Defensive battles to try to claw back what was lost will still be the order of the day for a long time to come – even despite some of the victories unions have won in terms of protecting pay and health and safety. But the global financial crash could look like mere child’s play compared to the coming depression – not recession – wreaked by the coronavirus crisis. While capital may not be exactly strengthened by it either, labour could be an awful lot weaker still.

This ties into a more general expected trend. Though we are living through truly unprecedented times, we should not underestimate the clamour for a return to capitalist ‘normality’ – and not just from the capitalists. Whilst it is right that socialists and radicals use the opportunity to raise searching ideological and political questions about the character and consequences of contemporary capitalism, we should harbour no illusions about the ability to affect the desired economic and political change at the moment. The capacity of the radical and revolutionary left – as well as social democratic left – is at a very low ebb. State intervention and seemingly Keynesian reflation measures do not in themselves represent the harbingers of progressive change because they are in place to support the neo-liberal variant of capitalism and will be relatively temporary measures. Indeed, they show the flexibility of the ruling class and its parties to rule in new ways. But just as importantly, workers have an immediate vested interest in returning to ‘normality’ – in other words, the working class wants to be ruled economically in the same way as before – and, critically, they are not fighting in substantial numbers for their own collective betterment. This latter element is the vital missing ingredient if we recall that the period of world revolution after the First World War as any kind of guide for radical social change. So, it is also not beyond the bounds of possibility that the forces of neo-liberalism will come out again stronger than they were before the crisis as per Naomi Klein’s ‘disaster capitalism’ thesis. She argues that neo-liberalism is capable of exploiting national crises to further establish controversial and questionable policies as citizens are too distracted (emotionally and physically) to engage and develop an adequate response, and resist effectively.

All this makes it seem that the Alex Salmond trial and Labour leadership elections were a bit of a storm in a teacup. The Salmond trial was not the blockbuster to shake the SNP to its core as many expected – whatever the outcome. But the sense that nothing much else matters will not last forever as the issues of post-crisis reconstruction (especially on how to pay off government debt, will the ‘blue tide’ over the ‘red wall’ have been a rinse or a dye, whether independence for Scotland is economically feasible) will come to the fore. In Scotland, Salmond’s book and the parliamentary inquiry into the Scottish Government’s handling of the case against Salmond will re-ignite the smouldering embers while Keir Starmer’s believed ability to be electorally credible will be put to the test. Brexit may even get a look in – so departing the EU hasn’t meant the Westminster government has been able to ‘take back control’.

Is Coronavirus causing a shift in attitudes towards immigration?