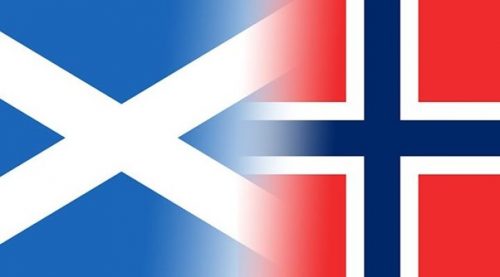 Though Raphael De Santos argues that while there’s no way to be a new Norway, there is still much scope for social advance

Many in the Scottish independence movement point to Norway as a model of what an independent Scotland could become. Is this possible or desirable? Both countries are in northern Europe with large land masses, small populations and an abundance of natural resources. That is where the similarity ends when one examines the key metrics around their economies and finances.

Norway is one of the richest countries in the world if we look at the size of the economy divided by its population (GDP per capita). It ranked, in 2017, as the eleventh richest country in the world with $62, 183 per head compared to Scotland at 34th with $39,272. Norway has one of the lowest rates of poverty in the world at 0.5% of its population. Scotland on the other has very high levels of poverty at 19% of the population. Scotland carries a large amount of public debt and its ratio to the size of the economy is 106%, which excludes our share of the £80bn of debt from 2008/2009 financial crisis. Norway’s is much lower at 41.6%. Norway’s deficit varies because of the volatility of natural resource prices. It ran a surplus until 2019 at an average of over 5% before falling into a deficit of 7% in 2020 because of the slump in oil prices and the COVID-19 recession but is expected to return to surplus 2021. This compares to a Scottish deficit of nearly 9% in 2019 and 22.4% in 2020.

Norway took under public ownership, in the 1970s, its oil and gas resources with initially well over 80% public ownership which has now slipped to 67% with 3% owned by the Norwegian public sector pension fund. This has allowed it to build up a large national wealth fund of $1.3n and fund public services properly. Scotland’s oil and gas resources are exploited by large corporations netting huge profits for them over 50 years. Scotland has no national wealth fund and under-funded public services.

In addition to the oil and gas industry being under majority public ownership, vast swathes of Norwegian industry are also commonly owned. Norway maintains large public ownership positions in key industrial sectors concentrated in natural resources and strategic industries such as the hydroelectric energy production (Statkraft), aluminum production (Norsk Hydro), the largest Norwegian bank (DNB) and telecommunication provider (Telenor). The government controls around 35% of the total value of publicly listed companies on the Oslo stock exchange, with five of its largest seven listed firms partially owned by the state. When non-listed companies are included, the state has an even higher share in ownership (mainly from direct oil license ownership). Norway’s state-owned enterprises comprise 9.6% of all non-agricultural employment, rising to almost 13% when companies with minority state ownership stakes are included, the highest among OECD countries.

Norway has a progressive income tax system with the rate of tax gradually increasing to a top rate of 16.2%. The low tax regime exits because of the tax revenues from oil and gas activities that are taxed at 78% of profits. It does, however, have an annual wealth tax. Scotland’s income tax rate starts at 19% and goes up to 46%. Corporate tax is 19% across the UK, the tax on petroleum super profits (PRT) was set to zero in 2016. Norway has its own currency, the Nokia Oyj (NOR). It is highly volatile and is driven by the oil price, trading over the last five years between 6.4 to 2.6 NOR versus the US dollar.

This allows Norway to keep its own currency, set its own interest rates and not be straight jacketed by the EU’s 3% deficit rule – which is very important when Norway can have one-off deficits because of a slump in natural gas and oil prices. It also allows the Norwegian government to intervene in its industries.

Having set out the economic substructure, let’s now turn to the political superstructure. Here, Norway is a leader in social legislation. With a wide-ranging social safety net, Norway takes the Sustainable Government Indicators (SGI) 2020’s top place with regard to social policies. Its score on this measure has improved by 0.3 points since 2014. This covers the areas of education, social inclusion, health, families, pensions, integration, safe living and inequalities. Norway, like the other Scandinavian countries, is progressive in regards to lesbian, gay, bisexual and transgender (LGBT) rights. In 1981, Norway became one of the first countries in the world to enact an anti-discrimination law explicitly including sexual orientation. Same-sex marriage, adoption, and assisted insemination treatments for lesbian couples have been legal since 2009. In 2016, Norway became the fourth country in Europe to pass a law allowing the change of legal gender for transgender people solely based on self-determination.

So, let’s turn to the issue of whether Scotland can become a Norway. We can certainly go in the direction of Norway without completely emulating it. The lack of public ownership of our oil industry since the discovery in the 1970s of North Sea oil and the fact Scotland was not an independent state then are the two main reasons why we will never be able to match Norway.

We are already a relatively wealthy nation coming in just above Spain in GDP per capita rankings. It would be impossible and not desirable to match Norway’s rating as we would have to grow the economy by over 56% with disastrous consequence for the impact on the environment. It would be possible to grow the economy gradually in a green sustainable way over a number of years. More important would be to reduce inequality in Scotland. Currently, Norway is the least unequal country in the world with the UK coming sixteenth.

An independent Scotland could dramatically reduce poverty by providing everyone with a guaranteed income, building affordable social housing and creating new training and job opportunities. But we have to remember that Scotland carries a large amount of public debt and would start off independence with a large deficit. We can bring this down over time but not likely completely eliminate it. This means that our debt would gradually increase over time. As long as we are showing that we are being prudent with our finances and bringing the deficit under control then investors will continue to lend to us (see September/October 2021 issue of Scottish Left Review). Our deficit can be reduced without public sector cuts through raising taxes on the better off and corporations and growing the economy in a controlled green fashion.

Joining the EU as a new country would mean that we would have to commit to taking the Euro our currency. We would have to set out a transition plan to bring our annual deficit down from nearly 9% to less than 3%. This could not be realistically achieved without an annual £5bn cut to public spending – about 6% of Scotland’s normal public spending budget. Belonging to EFTA and the EEA is a more preferable option.

We do not own our oil industry and the golden years of oil revenues have passed. It would not be desirable to be dependent on an industry which contributes so much to climate change. We could slap a super-tax on oil profits and give no tax relief for investment. This would stop future exploration in the North Sea and see the oil companies run down their existing fields. The additional super-tax revenues could be put in a Green Energy Fund to launch a publicly-owned national green energy company to move Scotland to renewable energy and create thousands of jobs.

There is great scope to take key strategic industries back under public control and ownership in an independent Scotland. We can identify key industries that provide essential services where public ownership can assure access to all at a reasonable cost which would help reduce inequality in Scotland. These industries would include: utilities, transport, banking, telecommunications and housing. These would be in addition to the creation of a new publicly owned green renewable energy company.

Taxation would be the main weapon to do this. We would have to raise taxes on higher earners and introduce a wealth tax as well as raising corporation tax which has fallen to an all-time low of 19%. As well helping our finances, this would reduce inequality in Scotland.

Having our own currency immediately after independence would not be advisable. The uncertainty of oil revenues and the size of our deficit would make the currency very volatile. We need a period of stability and showing the world we can manage our finances before launching our own currency.

Joining the EFTA and EEA looks to be the best option. We have the benefits of having a partial implementation of EU laws, be in the Schengen area and trade tariff free in the single market. But we have none of the disadvantages of EU membership: 3% deficit rule, no control of interest rates and being restricted on industry intervention.

Scotland has some way to go to match’s Norway’s social legislation with the UK being ranked 18th in the SGI index. Similarly, Scotland’s LGBT rights are not as advanced as those of Norway. There is no reason given Scotland’s centre left social democratic bias that we could not match what Norway has achieved in these areas.

So, to conclude, Scotland could not fully emulate Norway as it has lost the wealth that could have been gained from owning and controlling North Sea oil if had been independent in the early 1970s. Nor would it want to continue to rely on oil exploration given the further damage that would do to the environment. But it could with independence reduce inequality and poverty in Scotland. It could remain European and connected to Europe without the economic restraints of being in the EU. But all this requires a radical programme for independence, one that would appeal to the poorer sections of Scottish society to show them that independence would mean a better life for them.

Raphael De Santos has been active in left politics since the late 1970s. He was a supporter of devolution and now independence. He has worked in the financial sector for over 30 years, leading teams in research and strategy advising governments and central banks. References for all the statistics are available on request (contact@scottishleftreview.scot). Raphael examined the GERS figures in the September/October 2021 issue of Scottish Left Review.