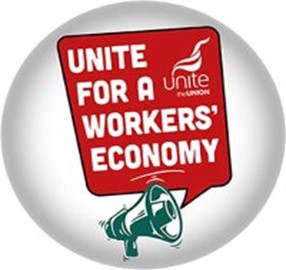 Pat Rafferty says workers are winning and on the march again.

The last two years have demonstrated who really matters in our society – and it’s not the rich and powerful. It’s cleaners, carers, paramedics, nurses, supermarket workers, cleansing workers, taxi and bus drivers, delivery workers, teachers and school support staff, and postal workers – to name but a few who kept our society running.

The answer should be as obvious to the politicians, as it is to us in the union movement: that if working people helped us get through the pandemic then they are simultaneously central to the solutions. Yet working people across the length and breadth of Britain are being denied a voice in terms of how our economy works. They are being momentously let down by the most shambolic, incoherent and dysfunctional UK Government in living memory, which is why we urgently need a general election. Families living on the breadline and those tragically falling below it, however, don’t have the luxury of waiting on parliamentary processes and elections whether they be for Holyrood or Westminster.

Recent Survation research commissioned by Unite across seven Glasgow Westminster constituencies covering starkly showed that families are experiencing severe levels of food poverty. Almost a quarter, 24% or 152,553 residents in the Glasgow seats polled are living in food poverty. The polling further revealed that 177,979 (28%) of residents in these Glasgow constituencies have either gone into debt, or increased their levels of debt in order to meet the increased cost of grocery items. Some 82,633 (13%) of residents in the seats are also not able to pay their household bills this year.

Profits in Britain’s top companies are up by 47%, and it’s predicted that workers’ real wages could experience the biggest fall in 100 years. Inflation has spiked at a 40-year high of 12.6%. Meanwhile the food bank charity, The Trussell Trust, is handing out emergency food parcels every 13 seconds as demand soars amid the cost-of-living crisis. The economy is not working for Glaswegian families nor any family for that matter across these isles.

The people of Scotland need solutions now which is why Unite has launched a strategy that places workers at the heart of positive and progressive change. The ‘Workers’ Economy’ campaign is a direct response to the failure of politicians to act. We are looking to drive the political agenda instead of commenting on it. We are aiming to do this through being rooted in mobilising and organising communities at the grassroots — a strategy led by people for the people.

For too long the activities of unions have been focused on how to influence devolved (Holyrood) and reserved (Westminster) parliamentary powers and processes, as if by doing so this then automatically conjures up outcomes. This is not to deny that influencing politics can and must have its role such as how we shape the Scottish Government’s chaotic proposals surrounding the establishment of the National Care Service.

Yet, let us be clear, the only reason that a quarter of a million Scottish council workers secured a vastly improved pay award was through industrial action. When COSLA did not have the backbone for the best part of a decade to stand up to the Scottish Government over continuous underfunding and cuts – unions did. Our collective strike action and union negotiating led to the Scottish Government funding a pay package worth £600m. No amount of lobbying or politicking could have achieved this outcome.

Therefore, it is only through building popular, working-class power, rooted in workplaces and communities that we can really achieve outcomes while we have a parliamentary system that remains rigged against working people, and denies workers an effective voice.

The reorientation in our strategy is taking place deliberately and purposefully alongside a groundswell of industrial action by working people who are refusing to accept low wages and attacks to our public services. This also shamefully includes the Scottish Government threatening over £500m of cuts to public spending.

Workers have never needed unions as much as they do right now. We are the only ones taking the fight to the governments in Edinburgh and London, to bad employers and the right-wing media.

Unions are taking centre stage across Scotland and Britain in the fight for decent jobs, pay and conditions – and we are winning! Unite has won dozens of pay deals across Scotland. Pay deals which have uplifted the pay of hundreds of thousands of workers.

Unite members at Stagecoach received a pay rise of up to 10% as First Bus Glasgow workers also secured pay rises up to 21.5%. HGV drivers at McPherson won 20.3% while Carntyne Transport drivers won up to 19%. These are just some of the great outcomes for our members – and there are many more.

Unite has thousands of members in dispute across Scotland currently fighting for a fair wage rise. We are leading – and we are winning. As a result, there is a new confidence building and growing in Unite – and no doubt other unions too.

Working people are taking notice in their workplace, in newspapers, listening to the radio and watching TV – that being a member of a union pays. It pays because we are directly putting money into the pockets of workers. Unions are the only ones delivering for workers in this cost-of-living crisis. We are actively advancing our collective fight and our agenda into every workplace and community – and surely this by definition is what a ‘Workers’ Economy’ should be all about.

Pat Rafferty is the Scottish Secretary of Unite the union

Unions defending workers’ jobs and their communities: doing what it says on the tin