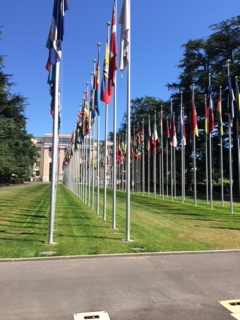 I have never been a member of the Labour Party and have not voted for them for many years. I have no intention of voting or supporting them in the future. So I have no agenda of defending the party from accusations on those grounds. I am Jewish and have strong concerns that the furore over Ken Livingstone and antisemitism as well as the adoption by the British government of a particular view of antisemitism has led to a particular atmosphere. This is where criticism of Israel, the political philosophy of Zionism, opposition to settlements in occupied territories, the entirely peaceful support for Boycott, Disinvestment and Sanctions campaign as a way of forcing Israel to negotiate over Palestinian human rights are now portrayed as antisemitism. Especially worrying is that debates that have taken place inside and outside Jewish circles as to the best ways of challenging antisemitism are now seen as antisemitic themselves.

It is nauseating to watch the political right worldwide – the supporters of Prevent, the supporters of Burkhini bans, the supporters of immigration bans against Islamic countries, those who claim Hitler didn’t gas his own people – complaining that the main antisemites are those of us on the left. And, all this as the antisemites of Jobbik, Golden Dawn, the French Front Nationale and others across Europe gain strength. By contrast, I believe it is entirely feasible to be critical of Israel, anti-Zionist and a strong opponent of antisemitism.

I have no doubts that Ken Livingstone and the left in general is anti-racist and firmly opposed to Islamophobia and antisemitism. It was heartening to see that the large European demonstrations against racism in March had Islamophobia and anti-Semitism as their main targets and to see Jewish members of the Labour Party defending Livingstone at the last inquiry – indeed, I think that is the reason why he was suspended rather than expelled. It was disheartening to watch left Labour leaders, including Corbyn and Abbott, who I’m certain know that the attacks on Livingstone inside Labour is a thinly veiled attack on them and the left, insisting on a further court that will likely expel him.

There has been longstanding debate inside Jewry since the formation of Zionism as a political force in the 1890s as to whether Zionism as a political philosophy is the best ways of combatting antisemitism. To most Jews before the Holocaust, Zionism seemed to be giving into the racists – the antisemites said Jews out; the Zionists said we want to go. For the bulk of world Jewry in Eastern Europe, the fight against antisemitism was a fight against the racists in Europe. That is why so many were involved in anti-racist movements and why it is estimated that of the 50,000 International Brigade volunteers who went to Spain in the 1930s to defend democracy against fascism, 6,000 were Jews.

This argument around how best to deal with antisemitism reached its peak during World War 2, when the Jewish Councils in Nazi occupied areas were put in the terrible position of deciding how best to save what they could. It involved, of course, compromise and, for some, collaboration with the Nazis. Numbers of Holocaust survivors – Primo Levi, Elie Wiesel and Marek Edelman, for example – have tried to come to terms with it and help our understanding of it. The debates were ferocious and often violent. The first victims of the Warsaw Ghetto uprising were the Jewish police. Indeed, there was a famous court case in Israel in the 1950s around claims that Rudolf Kastner, a leader of the Budapest Jewish Council, collaborated with Eichmann in 1944 to allow some 1700 Zionist pioneers (including his family) to get to Palestine in return for his support in facilitating the transportation of Hungary’s Jews to Auschwitz. Primo Levi’s work is about the ‘grey zone’, the difficult boundaries between compromise and collaboration and the guilt that was felt by survivors.

It is also well documented that the Nazis were in favour of making life so difficult for German Jews that they would emigrate; and, until about 1937, the Nazis considered Palestine as an option, alongside, amongst others, Madagascar and the Argentinian Pampas. This is not to excuse the crass nature of Ken Livingstone’s comments, but neither does it mean that Livingstone is antisemitic nor must it be allowed to close down debate. My point is that these are complex, difficult topics that help throw light on how to combat racism. We need to debate them so that we can learn lessons from the Holocaust, so that it is harder for genocide to recur.

Finally, I worry that these events inside the Labour Party have emboldened those who wish to curtail criticism of Israel. All say that it is entirely legitimate to criticise Israel, but some are now arguing that being anti-Israel has antisemitism at its secret core. I think it entirely legitimate to argue for a democratic secular state in the area, composing the lands of Israel, the West Bank and Gaza, as opposed to the Zionist ideal of a Jewish state. To think this is race hate is ridiculous. There is no contradiction between arguing for these things and combatting antisemitism.

Henry Maitles is a Jewish anti-racist and Professor of Education at the University of the West of Scotland.