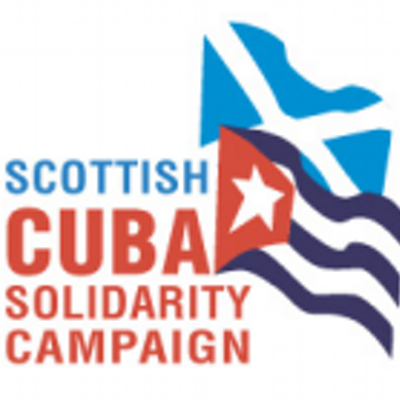 On the occasion of the sixtieth anniversary of its revolution, Imti Choonara, Ollie Hopkins and Kath Campbell chart the progress of healthcare in Cuba

‘If the accomplishments of Cuba could be reproduced across a broad range of poor and middle-income countries the health of the world’s population would be transformed’ said the Lancet Medical Journal in 2014. In spite of the overwhelming challenge of the US blockade, Cubans receive world leading healthcare. Health is enshrined in the constitution as a fundamental human right and delivered free of charge. Although initially modelled on the NHS, its subsequent development has focused more on a preventative model focussing on health promotion, with community based primary care, partly because of limited access to many of the medicines on the world market due to the US blockade.

Before the revolution, Cuba had only three medical schools which were exclusively for wealthy Cubans. Today, there are 23 medical schools training Cubans and overseas medics. Their Latin America School of Medicine, which educates foreign students free of charge has seen well over 30,000 doctors graduate, many of whom go back to work in their own communities. This has achieved one of the highest doctor-to-patient ratios in the world: over eight for every 1,000 citizens – more than double the rate in the US and Britain.

The country has a similar life expectancy to the US and a lower infant mortality rate: 4 for every 1,000 live births compared to 5.7. Women receive a minimum of 13 antenatal check-ups during pregnancy with maternity homes caring for those with high-risk pregnancies or social problems. Family doctors are the foundation of Cuba’s primary health care preventative model. They work in conjunction with a nurse from a small neighbourhood office – a ‘consultario’. They also live in the community they serve. Emphasis is on the family doctor knowing each family, both medically and socially which is extremely important in relation to child health where parents have a major influence on child health outcomes. Child mortality rates (neonatal, infant and under-five) are all lower in Cuba than in the US.

All Cuban families receive a minimum of an annual visit from the family doctor. As well as carrying out routine health checks such as blood pressure and heart checks, they also monitor lifestyle and other factors affecting health. Higher risk families, for example, those with existing health conditions, or smokers, are seen more regularly.

For more specialist services, including adult medicine, paediatrics, obstetrics, gynaecology, dentistry and psychology, patients are referred to a polyclinic – which serves between 14 to 30 consultorios. Patients see specialists quickly – usually waiting for one week –without needing to go to hospital. The primary care system ensures communication between the family doctor, the specialist and the patient.

Regional and specialist hospitals exist throughout the country for complex and tertiary care, but it is Cuba’s community-based primary healthcare provision which has produced impressive results. In contrast to other developing countries, Cuba has an ageing population and health problems are similar to that of rich countries. The response to these new health challenges is huge investment in public health education around smoking, alcohol, diet and exercise – and the family doctor and nurse are key in delivering this message.

Cuba’s preventative model has made world leading achievements. If the Global South could replicate Cuba’s achievements, hundreds of millions of lives could be saved each year. In 2015, the World Health Organisation reported that Cuba had become the first country to eliminate mother-to-child transmission of HIV and syphilis. There have also been outstanding medical and scientific advances. Cuba has developed a lung cancer vaccine, CimaVax, which is currently undergoing further research. Successful vaccines have been produced for cholera, malaria, meningitis B, hepatitis B, and many more.

Cuba’s international solidarity is beyond compare with their medical brigades being sent not just across South and Latin America, but throughout the world. Operation Miracle, a joint initiative from Cuba and Venezuela has seen more than 4m people have had their sight saved or restored with free eye surgery.

After the 2010 earthquake in Haiti, the largest contingent, caring for 40% of the victims was from Cuba. Following the two earthquakes in Nepal in May 2015, Cuba sent a brigade with their own medical equipment and a team of surgeons, anaesthetists, obstetricians, nurses and GPs. Since the Chernobyl disaster in 1986, 20,000 children have been treated for radiation-related illnesses free of charge in Cuba. More than 250 voluntary and specialised health cooperation workers of the ‘Henry Reeve’ medical brigade took part in the struggle against Ebola in West Africa. Cuba sent 2,400 volunteers to Pakistan following the 2005 Pakistan earthquake, who were responsible for treating more than 70% of those affected.

This has all been achieved in spite of the blockade. It prevents Cuba obtaining crucial medical equipment, particularly in tertiary care, and US-produced medications. The blockade can also impose limitations on collaboration, exchange of knowledge and advances both within Cuba and beyond. If the blockade was lifted, how much more impressive could Cuba’s health achievements be? 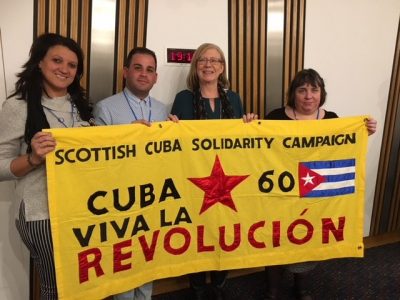 Dr Imti Choonara, Ollie Hopkins and Kath Campbell are activists in the Scottish Cuba Solidarioty Campaign (SCSC, https://www.facebook.com/scottishcuba/, https://twitter.com/scottishcuba). SCSC campaigns in Scotland for the defence of Cuba, and support its people’s rights to self- determination. It holds bi-monthly Film and Discussion Nights at John Smith House, 145 to 165 West Regent St, Glasgow G2 4RZ on 16 May, 15 August and 17 October 2019.