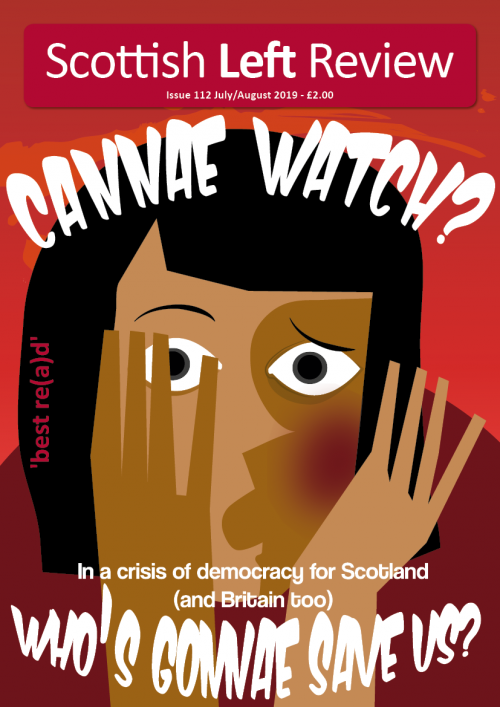 The politics of Scotland and Britain are about to enter dark days for democracy.

A white, ageing and disproportionately male group of citizens, numbering just 160,000 and nearly all from the middle class, are about to effectively determine who is the next prime minister. The concept of democracy has its origins in the Greek language, combining the whole of a citizenship (‘demos’) with ‘kratos’ meaning power or rule. Unless and until this selected person submits to a popular vote, namely, holding a general election, democracy will be a shadow of its former self. That may sound like historical amnesia given that Theresa May was selected without any vote at all and then did at least try (but failed) to gain a popular mandate. The key difference now though is that there is an impasse in the political system which may be about to be broken by a result – a no-deal Brexit – which even those that voted for Brexit did not quite envisage. Part of this paradox is that the party that won most seats in Britain for the European elections in May was a party without a manifesto and which there is no party membership.

Before this storm arrives from late July onwards, there is some time to pause to reflect on what kind of democracy we have in Britain and what kind of democracy we might wish to have. This is the theme of this issue of Scottish Left Review, and is kicked off by Willie Sullivan and his colleagues. Other articles by the likes of Tommy Sheppard, Neil Davidson, Kenny MacAskill, George Kerevan and Chris Hegarty begin to contextualise these types of broader considerations in the Scottish and British situations. And, in the light of comments by former First Ministers, Henry McLeish and Jack McConnell about creating a second chamber at Holyrood and using proportional representation to elect all MSPs, Paul Cairney looks at what type of democracy our Parliament legitimates.

Democracy can take direct and indirect forms, both parliamentary and non-parliamentary. It used to be the case that the extent of membership of political parties was part of the calculation here. For instance, the Tories had an individual membership of around three million in the 1950s while Labour’s, excluding affiliated membership, was around one million at this time. Tory membership dipped to nearly 100,000 in the early 2010s. Labour party membership is around 540,000 and the SNP’s is around 125,000. Such declines are lamentable but only one part of the overall situation when deducing the current state of democracy.

One of the newer and better ideas to emerge into the mainstream this year has been that of the citizens’ assembly (see Ian Patterson’s article in our March/April 2019 issue but also their propounding by Gordon Brown, Nicola Sturgeon and Rory Stewart as well as Extinction Rebellion). It looks like a much more inviting prospect for popular participation that any politician or party launching a ‘national conversation’. So-called ‘national conversations’ are, in effect, spurious and vacuous because there are no rules, structures or processes put in place, leaving politicians and parties to make what they want of the musings of the commentariat on both mainstream and social media. Might citizens’ assemblies not have these failings?

There are many virtue of citizens’ assemblies as a quasi-direct form of democracy – like being like an informed gathering of lay jurors – but there are still issues to be resolved over whether the method of selection is genuinely random, what happens if they still result in polarisation of opinion as a result of reflecting what is going on outside their confines, and what obligation – legal or moral – governments have act upon the outcome of their deliberations. And, there is the danger, like with referenda, that government set them up, determining their business, to suit their ends. On citizens’ assemblies, we did repeatedly ask both Gordon Brown and Nicola Sturgeon to make their case for citizens’ assemblies for this issue of Scottish Left Review but neither even responded, let alone declined.

There are also other methods we should consider as aids to extending and deepening democracy. Among these are allowing recall petitions to replace MPs (and MSPs, councillors etc as well) on the basis on more than just criminal convictions, and primaries – as in the United States – to widen the franchise for the selection of candidates for political office. Of course, these means in themselves would not prevent the new ‘alt-right’ and populist right subversion of democracy where they pose as defenders of democracy. That requires a political strategy based upon progressive political ideologies.

Brexit election tracker – at long last, the election is on!