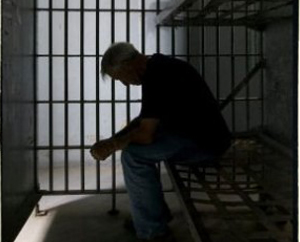 United Kingdom law removes the vote from all those serving a sentence in prison. The UK government is under pressure from the European Court of Human Rights to allow at least some convicted prisoners to vote.

The Edinburgh Agreement devolved to Holyrood competence over all aspects of voting in the referendum on independence, providing the Scottish Parliament with its first opportunity to legislate on the franchise.  A draft bill was introduced at the end of January. This included a proposal to exclude convicted prisoners from voting in the referendum, even if the law was amended for UK general elections meantime. A number of civic groups and individuals campaigned for Scotland to instead set a progressive lead on this issue within the UK.

Indeed, defenders of the blanket ban sometimes cited what the public might think, presumably unpersuaded by the European Court’s view that in a democratic society there is no room for automatic disenfranchisement based purely on what might offend public opinion.

Voting can be considered as a basic right of citizenship, or a privilege to be granted by those with power. If voting is understood as a right, it can still be taken away, but it must be demonstrated that this is necessary to protect other, equally important rights. If instead voting remains a privilege, then those with the power to do so can simply decide who deserves to vote based on their particular beliefs.

In 18 European democracies (including all of Scandinavia), in South Africa and some other countries, all prisoners can vote, because voting is regarded as too basic a right to remove. Other European countries remove the vote from some prisoners, based on the nature of the offence or the length of sentence. Of 47 countries in the Council of Europe, only Armenia, Bulgaria, Estonia and Russia, and the UK, place all convicted prisoners beyond the democratic pale.

Apart from the infringement of rights, other arguments against a blanket ban include:

From a variety of perspectives, campaigners argued that being in prison serving a sentence on a particular date was not enough by itself to justify something as significant as taking away someone’s vote.

Many individuals and organisations became involved over a short period, from a standing start, with very limited resources for co-ordination provided by Howard League Scotland. Outside the Parliament, these included the Jimmy Reid Foundation, the STUC, Scotland’s Commissioner for Children and Young People, the Scottish Human Rights Commissioner, the Equality and Human Rights Commission, the Scottish Association of Social Workers, the Quakers, the Church of Scotland Church and Society Council, SACRO, Recruit With Conviction, Positive Prisons? Positive Futures, the Prison Reform Trust, Penal Reform International, Amnesty, Liberty, members of the Scottish Youth Parliament (which had voted in favour of voting rights for some prisoners in early March), several former senior members of staff at the SPS, former prison governors, a former Chief Inspector of Prisons, high-profile figures from the arts who have worked with prisoners and a number of senior human rights and criminal justice academics. At minimum, these groups and individuals argued for a full and serious debate. Many were actively supportive of change.

The Scottish Government vigorously defended maintaining a blanket ban. Its main argument was that this had always been the position in the UK and Scottish Ministers believed there was no reason to change that. Indeed, the belief that ‘this is the way it has always been and therefore is the way it should continue to be’ was persistently presented as providing a conclusive argument in itself. When pressed, the government proposed a theory of ‘broken contract’, asserting that a person who has broken the law in a serious way does not deserve a role in the democratic process. This was the privilege argument at work, though even then with a questionable logic.

Under the blanket ban, on any particular date someone spending a few weeks inside is deemed always to have broken their contract more seriously than, say, everyone who is under home detention curfew or who has been released early, and all of the 85% of convicted criminals who never go to jail, including many convicted of serious assault, for example. Proponents of the broken contract approach did not reflect on how well society has kept its side of the contract as many of those who end up in Scotland’s prisons have stories routinely marked by deprivation, poor education, victimisation and time spent in care.

The government’s unshakable faith in imprisonment as a perfect ‘sorting hat’ for voting rights was, in particular, in obvious conflict with the Justice Secretary’s strongly expressed misgivings over many years about Scotland’s heavy use of short-term imprisonment, and his praise for the findings of the 2008 Scottish Prisons Commission, chaired by former First Minister Henry McLeish. This tension was raised repeatedly by campaigners.

Side-stepping such questions, Ministers did have plenty to say about how a legalistic reading of the ECHR left them with a freer hand than their UK colleagues. Even then, they had difficulty dealing with Patrick Harvie’s criticism that their commitment to an independent Scotland adopting the ECHR was in direct conflict with their hostility to prisoner voting in general.

Various amendments put down by Patrick Harvie, Alison McInnes and Margo Macdonald sought to limit the impact of the ban to fewer prisoners. Scottish Green and Liberal Democrat MSPs spoke and voted only in favour of change, with the support of two other independent MSPs (John Finnie and Jean Urquhart).

Labour votes were all cast in favour of the ban, though two back bench Labour MSPs (Graeme Pearson and Helen Eadie) argued the case for change at Stage 1, and one frontbencher (Patricia Ferguson) acknowledged the case for further debate – but not yet. SNP and Scottish Conservative MSPs spoke and voted solely in favour of retaining the ban. Between 105 and 107 MSPs voted against the various amendments and 8 in favour (7.5%). This is a similar percentage as in the most recent Westminster vote (9%), although at the UK level there has been a more diverse response within the parties, with votes cast for change by Conservative, Green, Labour, Liberal Democrat and Plaid Cymru MPs, and a (formerly Ulster Unionist) Independent MP.

The parliamentary debates were revealing about attitudes towards prisoners among MSPs from all three main parties. In particular, many MSPs clearly still subscribe to the existence of a stark divide between those who are in prison and those who are not, and believe that sending someone to prison is an opportunity to reinforce his or her exclusion from wider society and its values.

How far did innate conservatism and perhaps even some distaste at the prospect of having to deal with those in prison play any part in shaping the reaction of Scotland’s politicians? After the vote, a back bench MSP emailed Howard League Scotland asking how we expected politicians to canvass in prisons, seemingly unaware that those in prison already retain their vote while on remand. As the months passed and no extra-parliamentary organisation came out in support of the blanket ban, it became apparent that the only organised lobby in support of retaining the blanket ban was elected politicians themselves. The same pattern has emerged at Westminster in its most recent consideration of the issue.

Online commentary suggested that fear of a media backlash was at the heart of the political class reluctance to grasp the nettle of prisoner voting. In practice, however, the response of the Scottish media was one of the more encouraging experiences of the campaign. Coverage over several months was balanced and unhysterical.  The tabloids largely ignored the debate.

A head-to-head in The Sun between the Chair of Howard League Scotland and Annabel Goldie MSP generated just one (pro-change) comment. Comments only ran into large numbers when Kevin McKenna, previously critical of the UK government on this issue, in The Observer criticised the Scottish government position as “dishonest and craven”. This drew significant on-line criticism, including arguments that prisoners’ rights in the short-term had to take second place to protecting the government from a potential line of attack in the media at a sensitive time.

If fear of the media did explain some of the caution, what does that mean more generally in Scotland for the protection of those rights which party strategists assess will play badly in the press? The media and the ballot box will always be there to worry about. Must we always, as with same-sex marriage, wait until ‘the large majority of Scots agree that it’s time’, in the words of the Equality Network? That would be bad news for prisoners, among others.

Indeed, defenders of the blanket ban sometimes cited what the public might think, presumably unpersuaded by the European Court’s view that in a democratic society there is no room for automatic disenfranchisement based purely on what might offend public opinion. As it happens, the most recent polling data on this suggested that 63% supported keeping the blanket ban on prisoner voting (incidentally the same percentage as was recently reported to favour the return of the death penalty for terrorist acts).  32% supported some change. Progressive opinion on this may be in the minority: even then, it is under-represented at Holyrood.

The rhetoric of social justice, equality and human rights is now a major feature of set-piece political speeches by Scottish politicians. On the same day as the Parliament approved legislation to disenfranchise prisoners, speaking about the new legislation on same sex marriage, Alex Neil MSP said: “we are striving to create a Scotland that is fairer and more tolerant, where everyone is treated equally”. However, the debate on prisoner voting showed how the Scottish political system can have a determined capacity for blind spots when it comes to the treatment of small, ‘unpopular’ groups. Moreover, the Scottish Parliament proved to be more tightly controlled than Westminster, even if MSPs mostly responded to calls to discuss the issue more calmly than has sometimes been the case down South.

In the end, a chance was missed here to put down a marker about how Scotland values democratic rights, to show its commitment to social justice, to align us more closely with the European mainstream and to use active citizenship as aid to rehabilitation. When the rest of us vote next September, we should remember that 6,500 or so of our fellow citizens, drawn mainly from our most deprived communities, have been specifically excluded by an Act of the Scottish Parliament from having the same say.