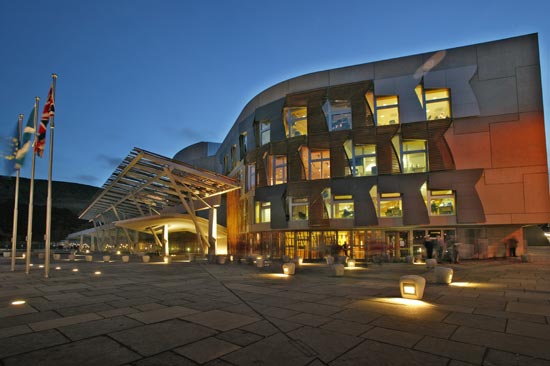 Whether as a result of the parliament in Westminster or Holyrood, we live in a parliamentary democracy but parliament is not sovereign over many areas of our lives and society. Instead, businesses and business interests pervade much of our lives, being the hidden and not so hidden hand of the market that often determines what happens and why. Steps need to be taken to regain control over society for the majority of its citizens (workers and their families) so that the democracy we live in is a real and effective one. This would mean that parliament becomes sovereign but that this sovereignty is exercised in the interests of the single biggest group of citizens in society (workers and their families).

Westminster is said to be the ‘mother of all parliaments’, namely, the oldest and the best in the world. Yet it is very far from being adequate for what is needed to meet the interests of the majority of the citizens (workers and their families) it governs. This takes six aspects:

a) The domination of business interests and a business agenda in all three main political parties (Labour, Liberal Democrats, Conservatives). The ideas that dominate now are one version or another of neo-liberalism – the idea that the market should determine what happens and why in society where everything can be commodified into a market transaction. This represents an ideological deficiency.
b) Within parliament itself, MPs are dominated by careerists and sycophants who are not accountable. They are there for the bettering their own personal interests when serving the interests of business. This represents a compositional deficiency.
c) Parliament runs on the basis that it controls and regulates itself. It is sovereign over the people and not vice-versa. This represents an organisational deficiency.
d) Since the rise of Thatcherism and largely continued with by ‘new’ Labour, Parliament has chosen to give over to interests outside itself the powers it used to have. This has taken the form of privatisation, deregulation and quango-isation. Each has allowed business interests to get stronger and stronger. This represents a political deficiency.
e) Even before the advent of Thatcherism and ‘new’ Labour, there were areas of society – especially over the economy and way businesses ran themselves – that parliament never had control over. Indeed, parliament was set up this way as a conscious decision and at the behest of the rich and powerful. In addition to this, the civil service, police, judiciary and military as part of the state are not fully accountable to parliament and more often than not act in accordance with their own interests and not of those they are supposed to serve, namely, the people and parliament. This represents a structural deficiency.
f) Increasingly decisions are to taken outside Britain which impact upon citizens in Britain but which they have no control over. Examples are to do with the European Union as well as new international trade agreements between the US, Europe and other regional powers. The most obvious are the Viking and Laval European Court of Justice decisions which make striking increasing unlawful as business interests are put first. This represents a legal deficiency.

Together these six deficiencies make up what amounts to a huge democratic deficit – parliament is not sovereign and nor is it accountable to and representative of the people it is supposed to serve in a democracy.

To this list can be added other deficiencies such as the continuation of the undemocratic, unaccountable monarchy, the hollowing out of the powers of local government as well as the promise of the now established nature of the Scottish Parliament not being realised. The Scottish Parliament was supposed to different to the Westminster parliament. Indeed, it was supposed to be a people’s parliament with its powerful committees able to scruntinise the parties’ bills in a non-partisan way. This has not happened, and like Westminster, MSPs are mostly drawn from small range of middle class occupations and political apparatchiks now dominate the top of the political tree. Few have working class background or politics. Committees have been usurped by the party system and outside lobbying interests – for businesses in particular – are now making the running.
Below six proposals are set out to reduce the aforementioned democratic deficiencies. Bar one, they would affect both the Holyrood and Westminster parliaments. The suggestion of using primaries to select prospective parliamentary candidates is not advocated because this would allow forces outside of Labour to potentially determine which candidates it selected, making Labour even more potentially pro-business than it already is.

i) Recalling of parliament There have been plenty of times recently when parliament has become out of step with majority public opinion. Foreign wars and the decimation of public health are but the most obvious example. There are also times when the governing party does not implement the manifesto it was elected upon or makes decisions that are out of line with its previous actions or policies. Sovereignty lies with the people and waiting for the end of a fixed term parliament or the governing party to call a general election means that instead parliament has sovereignty over the people. Petitions and popular assemblies (virtual and actual) can be used as the means to demonstrate there is sufficient support to allow recall general elections.

ii) Recalling of MPs Whether as a result of voting a certain way or not voting at all or unacceptable personal conduct, there are strong grounds for constituents to being able to recall and replace individual MPs. This could be done through the means of petitions and popular assemblies (both physical and virtual) so that the act of recalling is carried out democratically and legitimately.

iii) Public petitions The Scottish parliament already has a system by which members of the public can petition to raise certain actions and issues in parliament. This does not exist in the Westminster system but should. This would allow groups in civil society, most especially the STUC and unions and other voluntary groups to play a bigger role in creating a different society over issues which are the reserve of Westminster.

iv) Reform of the way parliaments work Parliamentary committees should have more powers and being able to operate without being subject to whipping.

v) An outside third party to regulate how parliament conducts itself The Standards Committee needs to be replaced by an external body which is independent of both parliament and government. This body should be drawn from the ranks of ordinary citizens as with a jury system.

vi) A series of compulsory economic, social and political tests Parliament should compelled to operate by a system of economic, social and political tests which are designed to measure the influence of extra-parliamentary actors and processes on the lives and living standards of citizens. Where these extra-parliamentary actors and processes are deemed to play an important but detrimental role in influencing the lives, life chances and living standards of citizens, parliament should then be compelled to intervene through legislation and regulation in order to ensure that the detrimental effects of these extra-parliamentary actors and processes is ameliorated. For example, the activities of unions should not be regulated in a restrictive way because unions benefit workers and their families by reducing competition between workers, thus, raising pay and benefits. The union wage premium – the positive difference between the wages of union and non-union workers in testament to this. By contrast, many employers do not paying the minimum wage or the living wage and most are in competition with each other over wage rates in the pursuit of profit. This leads to a downward pressure on wages leading to lower living standards for workers and a reliance on benefits. This is evidence of employers not benefitting workers and so they should be regulated in a way to lessen the effect of their actions.

The six proposals would go some way to addressing the aforementioned democratic deficiencies. The most far reaching of them is the proposal to establish the series of economic, social and political tests because this addresses the greatest number of deficiencies while the proposals to recall parliament and MPs reinforces the means by which to enforce that parliament and MPs act by the outcomes of the tests. Meanwhile, the ending the ability of parliament to regulate itself would address the organisational deficiency. To this we can add the devolution of power downwards from the Westminster and Holyrood parliaments (even after enhanced devolution in Scotland) so that a federal system exists in which the exercise of power is carried out at a lower level in order to allow the popular participation of citizens. But as alluded before steps must be taken to ensure that the existing political does not dominate these new structures and processes.

The big question is how to get a parliament that would resist these changes to accept them because there is a ‘chicken and egg’ situation here. Does parliament as an institution need to change first or does the composition of the MPs need to come before that? Whatever the answer is, it is clear that the momentum for change will come from outside of parliament with the few decent MPs like John McDonnell being the voices for change within parliament.

Gregor Gall is professor of industrial relations at the University of Bradford. An earlier version of this paper was written for United Left Scotland, the left grouping in the Unite union in Scotland.