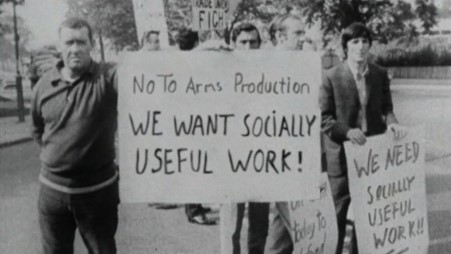 Steve Sprung, writer/director, The Plan That Came From The Bottom Up, 2018

The need for the human race to counteract, mitigate and reverse catastrophic impacts of climate change on an industrial scale is currently undeniable. In particular scientific, corporate and political quarters, it was no less so, forty years ago. This is why this documentary touches in with particular relevance and currency today.

The Plan That Came From The Bottom Up opens, and is threaded, with the cynical, world-weary, spoken narrative of a woman who lived through the Thatcher years. She addresses a younger male narrator, who reflects upon and comments about her views. Their call and response voiceovers evoke a time in history when factory workers and communities were cast adrift, trapped by an allegorical fog of oppression, which was imposed upon them by ‘unseen forces’ of the market.

Significant focus is given to turbulent changes that surfaced in Britain during the 1970s, when a technological boom, international competition and traditional job losses combined, thus, generating a perfect economic and cultural storm. Specifically, a number of Lucas Aerospace engineers who authored the titular Plan feature predominantly in the film. We learn why and how they created a detailed conversion manifesto, to design and manufacture products such as wind turbines, hybrid cars and heat pumps, instead of military jets. It becomes apparent their proposed action was both unprecedented and inspired, representing a unique kind of revolution, a distinct alternative to strike action or a ‘work-in’.

In benefit of current hindsight, the same engineers convey a clear message, namely, the power of factory owners, managers and financiers exists to keep workers in their place rather than to respect progress and reward workers for producing radically intelligent and socially responsible ideas, whether as a valid argument to either retain their jobs in-situ, or to change the world for the better.

Archive footage of engineer, writer and union leader, the late Mike Cooley, gives credence to him as both conceiver and proponent of ‘Socially Useful Production’. A key activist behind The Lucas Plan, his presence at public meetings and his articulate attempts to persuade bankers evidently had no bearing on the dismissal of the engineers’ manifesto, the mass loss of British jobs or the demise of the company two decades later. Moreover, we learn that, despite accolades being poured upon The Lucas Plan by such as then Secretary of State, Tony Benn, and, extraordinarily, the Financial Times, the document was otherwise mocked and rejected, ultimately discarded as being ‘unsuitable’ for the Birmingham factory.

Sprung stated in interviews that his documentary was intended as a contradiction to the Thatcherite paradigm, it being a reiteration of neo-liberalist political concepts. Wikipedia defines neo-liberalism as ‘the 20th-century resurgence of 19th-century ideas associated with free-market capitalism… it is generally associated with policies of economic liberalisation, including privatisation, deregulation, globalisation, free trade, austerity and reductions in government spending in order to increase the role of the private sector in the economy and society’.

At over three hours long, the pattern of sometimes rambling itemisation of factors and hugely significant historical points just about holds together, maybe thanks to such as esoteric, hypnotic imagery and intimate-seeming voiceovers. The Plan That Came From The Bottom Up delivers, as a historical record which should ensure that its storytelling is not relegated to folklore. Its broad foray of mentions, including such as Orgreave, Tilbury, Glasgow and other British elements, cuts a swathe from Portugal to Russia, from the 1920s to present day. Weaving and meandering through its core subject, like a secret which seeks to be better known. Scotland’s influential figures are given less airspace than we might anticipate, although Scottish documentaries such as Nae Pasaran and Belonging: The Truth Behind The Headlines are good considerations for those interested in related subject matter.

Jackie Bergson has worked in the voluntary sector and commercial business development in technology and creative sectors. Educated in and living in Glasgow, her political and social views chime left-of-centre. For more on the documentary, see http://theplandocumentary.com/