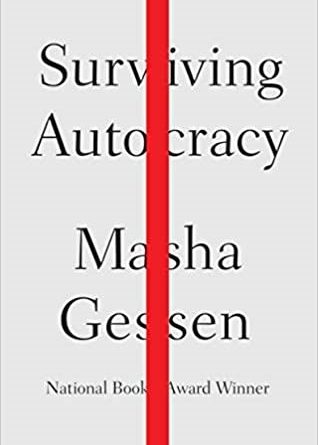 In the allegedly free late 1960s, I completed my doctorate on the profound influence of Russian novelist, Dostoevsky, on the young Canadian-American writer, Saul Bellow. In retrospect, I now feel that, in part, the thesis was driven by a desire that this mutual level of creative fictional genius would somehow serve to reconcile America and Russia and remove the terminal nuclear threat of the Cold War.

Now, ironically, all these years later I find myself reviewing a brilliant, utterly scathing book on Trump’s America by a Russian writer new to me, Masha Gessen. She is an investigative journalist of the highest order with a complex, historically deep, comparative intelligence. Her grasp of English language is perfectly employed to reveal the havoc visited by the Trump administration on all the vital institutions of American civic and legal life. Her great advantage, which she used to enormous effect is that she had made acute studies of other autocratic cultures (Hungary, Israel and of course, her own dear land Russia). She knew from early in her life the danger of living in a country where political lying was a constant and no opposition would be brooked. Her biography of Putin, The Man Without a Face, must have required extreme courage and honesty. Investigative journalists are a well-defined category fatally visited by Putin’s hit men. The opposite of this politically psychopathic Russia has been from the October 1917 revolution onwards discovered in writers like Vasily Grossman, and the Mandelstams (husband and wife), a sacred sense of opposing truth to power. Gessen has that quality and it leads her to be highly critical of many apolitical American journalists who are quite unable to properly penetrate and reveal the flood of Trump’s personal and political lying.

Critical to her book is, of course, the Putin/Trump axis. This provokes her stringent denial of the historical Great Man thesis beloved by the present Churchill parodist currently in Number 10. Thus she writes: ‘A reading of contemporaneous account will show that both Hitler and Stalin struck many of their countrymen as men of limited ability, education and imagination – and, indeed, as being incompetent in government and military leadership. Contrary to popular wisdom, they were not savants, possessed of one extraordinary talent that brought them to power. It was rather, the blunt instrument of reassuring ignorance that propelled their rise in a frighteningly complex world’.

Having defined how we see autocrats in history, Gessen goes on to define how:

We recognise the desperate desire of Putin to be admired or at least feared – usually literally at his country’s expense. Still, physical distance makes villains seem bigger than they are in real life. Just as the full absurdity of Trump was sinking in, crushing any hope that he would turn ‘presidential’, Putin, in the American imagination, was turning into a brilliant strategist, a skilled secret agent who was plotting the end of the western world. In fact, Putin, was and remains a poorly educated, underinformed, incurious man whose ambition is vastly out of proportion to his understanding of the world. To the extent that he had any interest in the business of governing, it is solely his own role – on the world stage or on Russian television – that concerns him. Whether he is attending a summit, piloting a plane, or hang gliding with Siberian cranes, it is the spectacle of power that interests him. In this, he and Trump are alike: to them, power is the beginning and the end of government, the presidency, politics – and public politics is only the performance of power.

For her analysis of Putin and Trump, Gessen has drawn the highest praise from Timothy Snyder whose The Road to Unfreedom: Russia, Europe, America (2018) is an extraordinarily lucid account of the ongoing regression of twenty first century nations into tyrannical forms of government with all the resultant catastrophic consequences for politics, economics, civility and culture. On the dust-jacket of Surviving Autocracy, Snyder declares Gessen as ‘an indispensable voice of and for this moment.’ This comment is equally self-referential. I can think of no better way of catching the farcical surreality and the pervasive criminality present in and consequent of Trump’s 2013 visit to Russia. This is investigative journalism merging into historical witness of the highest order. It is also a near perfect introduction to the subsequent nature of these two titans’ relationships:

Trump’s contribution to global heterosexuality was to bring a beauty pageant to the Moscow suburbs, or rather to look on as Russians did so. In principle he was the organizer; in fact, he was paid twenty million dollars to oversee the work of his Russian colleagues. This was a pattern of relations between Russians and Trump that was by then long established: Trump was paid so that his name could assist Russians who knew something about money and power. Just a few weeks earlier, in April 2013, the FBI had arrested twenty-nine men suspected of running two gambling rings inside Trump Tower. According to investigators, the operation was overseen by Alimzhan Tokhtakhounov, a Russian citizen who also ran a money-laundering operation from a condo directly under Trump’s own. As the FBI searched for him, Tokhtakhounov attended the Miss Universe pageant and sat a few seats away from Trump. (The United States attorney who had authorized the Trump Tower raid was Preet Bharara. Upon becoming president, Trump fired Bharara.)

The squalid corruption of big money is everywhere present. Gessen, however, has been prepared for American plutocracy by the influence on her of the Hungarian political philosopher of the resurrection of the dictator in our time: ‘Magyar spent about a decade devising a new model. He coined the term ‘mafia state’ and described it as a specific, clan-like system in which one man distributes money and power to all other members’.

It could be argued that the Trumps, from the sociopathic father Fred to the would-be Don Donald, have had such intimate dealings with the American mafia as to render such European theory irrelevant. Trump does run the presidency with himself seen as omnificent and omnipotent and his officers of state as completely loyal to his every unstable whim. The constant sacking of staff, both good and less often bad are witness to this.

Another quality shared by Putin and Trump is anti-black racialism in general and, in particular, an intense loathing of Obama. From Snyder’s study of the Putin encouraged detestation of Obama, we know that on the President’s birthday in 2014 ‘Russian students in Moscow projected a laser light show on the US embassy building, portraying him performing fellatio on a banana’. Such virulence obviously led to increased xenophobic enthusiasm for a Trump presidency. Also, the correct Russian belief that Trump would be putty in Putin’s hands. Putin also saw Trump as his partner in protecting heterosexuality. This explains Trump’s subsequent attacks on homosexual America and his being entranced by White Evangelical America. He is also Anti-Christ to its Mammon worship.

Much more than any affinity Putin felt for Trump, Snyder has suggested that they wanted him in post to bring down the institution an essence of American democracy itself: ‘Russia’s intervention in the 2016 US election was not just an attempt to get a certain person elected. It was application of pressure to the structure. The victory of a Russian-backed candidate could be less important, in the long run, than the evolution of the system as a whole, away from democracy’.

This sounds like The Manchurian Candidate where the baddies win big time. As I write however, the estimable Luke Harding has published Shadow State: Murder Mayhem and Russia’s Remaking of the West (2020). Russia’s involvement, especially its cyber power and the obedience of a near wholly degenerate Republican party has over the last four years wrought havoc to America. Gessen traces Trump’s wanton disastrous destruction of America’s civic, medical and legal institutions. He is the fulfilment of Ronald Regan’s wish to remove all central government so that private enterprise, in the insanely alleged American way, can run the whole country. Trump is, indeed, the President of the Deal. And, the antithesis of the New Deal that right wing Americans have so long yearned for. Unfortunately, for their malign fantasy, among the multitude of institutions Trump either gutted or scrapped, was the world class Pandemic unit he inherited from Obama. The terrible fatal consequences rage on. If Trump gets an official tomb the only possible inscription would be ‘I am not responsible.’