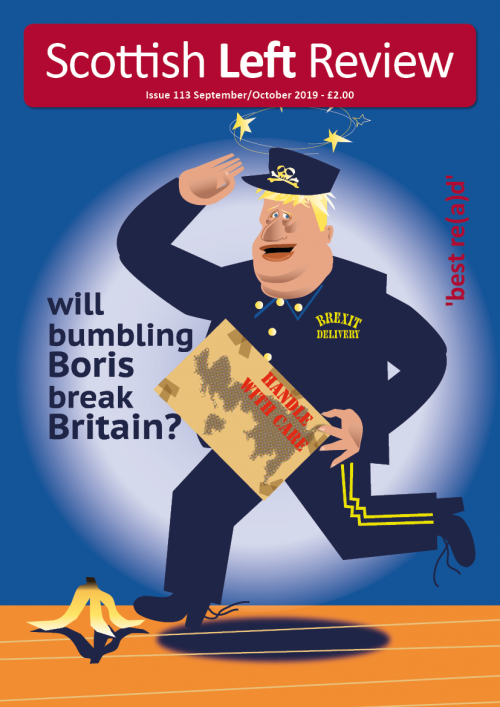 Like many others, Scottish Left Review is outraged at the attack on democracy represented by prorogation and condemns this extended suspension of Parliament to allow for a no-deal Brexit to be forced through without any parliamentary scrutiny or the opportunity for parliamentary opposition. Scottish Left Review supports initiatives to mobilise citizens outside of Parliament to confront this anti-democratic outrage. We call on all opposition MPs and Tory MPs who believe in parliamentary democracy to join together to defeat this outrage. All the articles in this issue (bar Kick up the Tabloids) were written before the prorogation was announced on 28 August 2019.

It has long been a shibboleth on the radical left, following from Marx and Engels, that politics in the last instance bends to the will of economics. This is because capitalism – the system we have lived under for over 150 years – is a fundamentally about pursuit of profit. Politics is merely an expression of this and there to facilitate it. And yet, it seems politics is trumping – no pun intended – economics at the moment. We have a now dominant political faction of the Tory party intent upon delivering a ‘hard’ Brexit – actual or via a ‘no deal’ – in order to deliver upon its long-held goal of regaining much British political sovereignty from the EU. And yet the major representatives of capital, like the CBI, vehemently oppose this. Even if a new found economic nirvana is to be gained, there will be a lot of pain and disruption before it is arrived at. So, how to explain this conundrum? Are Boris Johnson, Jacob Rees-Mogg etc ‘anti-capitalists’ – even of a reactionary nature? Or, are they the representatives of a particular fraction of the capitalist class? Who will benefit from Brexit?

In the lead article in this issue, George Kerevan explains this perplexing situation because he examines the fractions – maybe factions – of capital that exist at the moment. Those that will economically benefit from EU withdrawal are what he calls the ‘Del boy’ capitalists – the Aaron Banks, James Dysons and Tim Martins of this world – and they are bankrolling the political reactionaries who believe in a particularly virulent form of British (maybe just English) nationalism. Together, they have created a new form of right-wing populism. They seek to have a ‘people versus the politicians’ general election to either bring about their preferred type of Brexit or cement it after it the deed is done. Those on the left that supported – and still support – withdrawal need to wake up to the manifest reality of this intention.

Returning to the radical left (and Karl and Frederich), another shibboleth is that capitalism – and its politics – is full of contradictions. This is certainly true as Boris seems to be prepared to engage in Keynesian-style reflation to try to aid him in a general election and prevent any economic meltdown following Brexit. Pragmatism of both an economic and political sort then? In the grand scheme of things, Johnson is a neo-liberal but his is also an opportunist. He has not been a longstanding ardent ‘leaver’. He is a more recent convert. What particular political capital he has – compared to Theresa May – is that he would have a better chance of selling to the Brexiteers a deal that she couldn’t – being one that falls short of their maximum programme. He sees himself as a disruptor for a super-charged neo-liberal project. His bombastic, bumbling buffoonery is but a cover for this dark project which includes bringing in more private companies to deliver public services and deregulating the workplace. It is the new form of right-wing populism which under cuts the Brexit party in order to bolster the Tories. In this issue, Peter Lynch lays out the personnel resources Johnson is now calling upon to bring this project to fruition, showing that it is about much more than just Brexit. All this shows that this August has not been the normal ‘silly season’ where formal politics takes a break and newspapers chase inane stories to fill their front pages in order to make up for the shortfall in ‘hard’ news.

The other sides of the on-gong crisis in politics in Britain, of course, involve Labour, LibDems and the SNP. New LibDem leader, Jo Swinson, does not to care that she seems to have overplayed her hand by saying that the official leader of the opposition does not have first call on being the caretaker prime minister if Johnson and his government lose a motion of confidence, prorogue parliament or suffer a major legislative setback (like the revoking of Article 50). She’s been rather illiberal and undemocratic in doing so – but this is because she’s putting her party’s interest first and foremost. In terms of MPs, the LibDems are so far back from the ‘I agree with Nick (Clegg)’ times of 2010 – because of their backsliding on student fees and the like – that they are prepared to do anything and everything in order to help turn their new found popularity into more MPs. We should, of course, recall that the LibDems were co-parents of austerity and Swinson was the Social Security minister who introduced Universal Credit and the bedroom tax.

Meantime, Labour continues to get a ‘sore arse’ by sitting as many different ways as possible on the Brexit fence. It’s understandable given the split over Brexit amongst its core supporters. But it would have been far better to have declared a crystal-clear position – whatever that may have been – take the inevitable, short-term hit and then move on to campaigning on that position instead of ever grudgingly changing on shifting sands. Polling wise, Labour has gone from being quite well ahead to quite well behind on account of the Boris bounce. But how long will that last? And, there are dangers for Labour if it seeks to lead a government of national unity. Political unity is not possible at the moment. Class unity is not desirable at any time. For example, who would be in the driving seat to determine the nature and purpose of any subsequent referendum?

Talking of polling and bounces, has the SNP finally got its beloved prize? The first poll showing a 52:48 margin for independence has emerged – it seems on account of not just Brexit but a ‘no deal’ Brexit. Again, will this last? And, why did it take so long and should the margin not be much higher? There is discontent within the SNP on the leadership’s chosen slowly-slowly strategy (hence, interest in Angus McNeil’s ‘plan B’). Much here depends upon not just Labour in London but Labour in Edinburgh. It’s been another torrid time for Scottish Labour, especially on the issue of independence. Asked many questions in an interview during the Edinburgh festival, John McDonnell responded to one by saying Labour Westminster government would not reject a request from the Scottish Parliament for a Section 30 order to allow another referendum. Corbyn repeated this – again adding that Labour would campaign for a ‘no’ vote. Yet Richard Leonard simplistically responded by saying Labour should concentrate on Brexit and austerity and not on independence – as if the former had no bearing on the latter and vice-versa. The irony of this is that McDonnell and Corbyn were only saying what they had said three years ago and it was Scottish Labour’s position is contrary to the Claim of Right which Labour signed up to. On the day of prorogation, a compromise was announced by Scottish and British Labour, whereby a Section 30 order would not be granted in the ‘formative’ years of a Labour Westminster government.

Making positive use of Brexit in hospitality and tourism