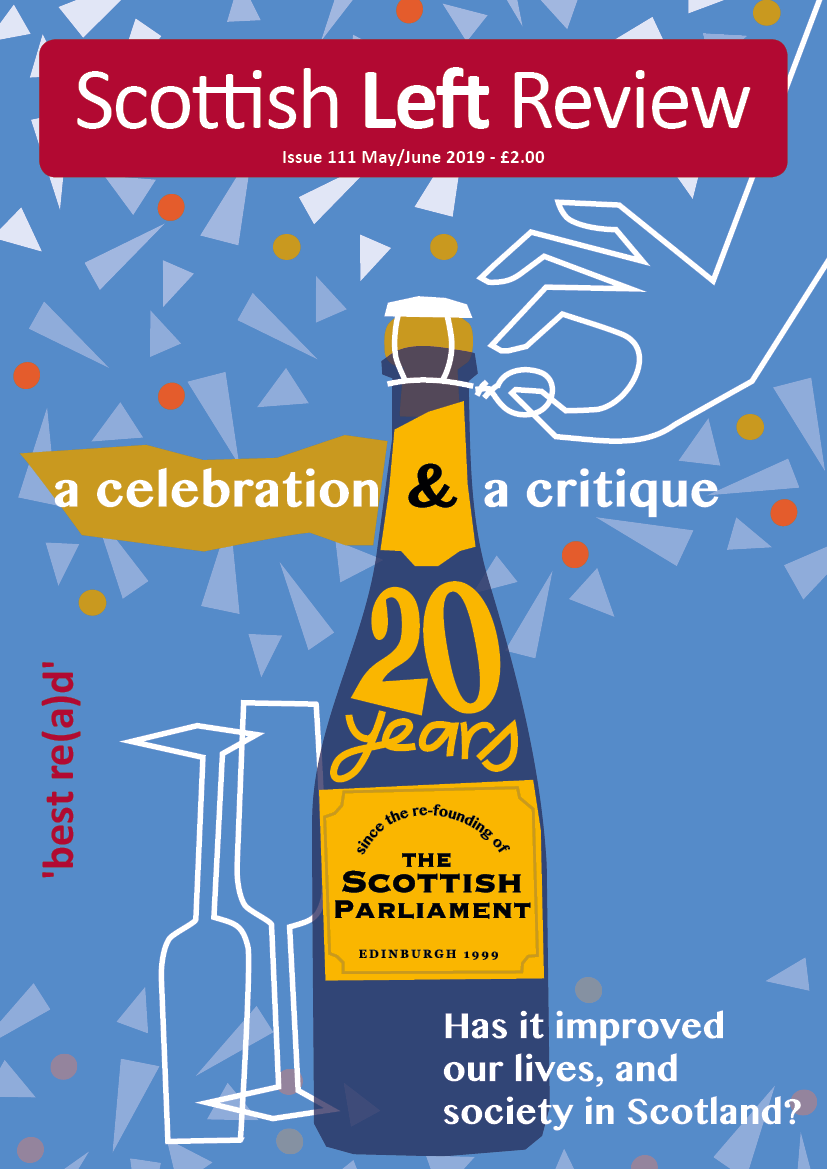 The theme of this issue of Scottish Left Review is an examination of the intentions, processes and outcomes of the Scottish Parliament upon the occasion of the twentieth anniversary of its re-founding.

The referendum of 11 September 1997 voted to re-establish a Scottish Parliament with its own (minimal) tax raising powers. The first elections to the Parliament took place on 6 May 1999 and the Parliament began sitting again on 12 May 1999. The hope to see a ‘people’s parliament’ – or certainly one in Holyrood reflecting more progressive politics than those traditionally found in Westminster – was also the spur to the founding of the Scottish Left Review by Jimmy Reid and others like Aamer Anwar, Roseanna Cunningham, Cathie Jamieson, John McAllion and Bob Thomson (see http://www.scottishleftreview.scot/wp-content/uploads/2017/07/SLR-1.pdf for its first issue in October 2000). More than anything, Scottish Left Review sought to establish a cross-party (and none) forum for creating a progressive left agenda for the Parliament. We have reflected on the progress made on this in our recent issues (100 and 107).

So, in this issue, we have asked a number of left writers to reflect upon the issues at hand, whether from a combined personal and political perspective (like current and former MSPs, Elaine Smith, Alex Neil and Colin – we also asked Patrick Harvie as the longest serving Green MSP (2003-) but he did not respond) or from a single- issue perspective (on housing, poverty, rail etc). If the content of these ‘on theme’ articles seems rather more slanted towards ‘critical’ critique than ‘congratulatory’ celebration that is merely because the general consensus on the left is that the Parliament has not delivered sufficiently upon the (left) aspirations of it. Recall that one of the most cited reason for having a Scottish Parliament again was not just to reflect and represent ‘the will of the Scottish people’ – remember the ‘Scotland votes Labour but gets a Tory government every time’ – as it was termed but also to provide a shield against any future Thatcherism. Here, there were to be ‘Scottish solutions to Scottish problems’ as Donald Dewar told the Scottish Labour conference in September 1999.

Sure, we have had some protection from the ill Westminster winds of neo-liberalism – via limitations on privatisation, marketisation, austerity and the like – in the areas of the public provision of health, education and social welfare as a number of the articles point out. This shows what could not have been achieved without a Scottish Parliament. And yet, there is still palpable dissatisfaction. The sense of more critique than celebration may result for a number of primary reasons – the aspirations were unrealistic given the devolution settlement (with the continuation of important reserved powers), party machinery exerted itself in a parallel way to that found in Westminster, and the hand of neo-liberalism over political imperatives has strengthened since 1997-1999. These certainly dwarf initial concerns that the cost of building the parliament escalated from £40m to £400m, that second home allowances for MSPs created a gravy train, and that the location was Edinburgh and not Glasgow. Indeed, some argued for the parliament to be built around Stirling as a central location and with a parliamentary village comprising dedicated, stated-owned residences.

Despite the strengthening of the devolution settlement with consequent Scotland Acts of 2012 and 2016 and with continued demands for independence from a sizeable proportion of the electorate, it seems hard to find any lasting truth in the words of then leader of the (British) Labour Party, John Smith, when he told the Scottish Labour Party conference in 1994 that a Scottish Parliament would represent ‘the settled will of the Scottish people’, much less that its creation would form the ‘cornerstone’ of his party’s plan for democratic renewal within the United Kingdom. (Normally, this editorial would change ‘UK’ to Britain on account of the nations and classes of these isles not being particularly united and because of longstanding republican tendencies. But in this instance keeping the ‘UK’ serves to remind us that Labour, in particular, has a long way to go to create a ‘united’ Britain and a republic).

Those campaigning for a Scottish Parliament – from many different shades of left opinion – believed that the Parliament would offer an opportunity for ‘new politics’ to be conducted in a ‘new way’ (for example, the committee system, list MSPs elected by a new voting system etc etc). Others were somewhat disdainful. To devolution, revolution was baldly counter-posed – and it was said the only benefit of a Scottish Parliament was that it would be lessen the distance to be travelled to mount protests outside parliament. Like many things in life and society, experience suggests that if the truth does not quite lie in between the two, then certainly neither were particularly accurate assessments. The wipe out of the Scottish Socialist Party in the 2007 election after its implosion in 2006 was one particularly unforeseen event (even though the SSP’s policies – put into the form of parliamentary bills – on free school meals, free prescriptions and free public transport continue to reverberate in our polity). So too was that the SNP would ever form the government – which it has from 2007 onwards and showing that the prediction from Labour MP, George Robertson, and then shadow Scottish secretary, in 1995 that ‘devolution will kill nationalism stone dead’ has been turned on its head.

Although what does emerge from the ‘on theme’ articles is common agreement that the Parliament has barely gained a ‘6/10’, that consensus breakdowns on how it could and should do better. Some favour using existing powers or more fully using them, some favour further devolution, some favour devolution within Scotland and, of course, some favour independence.

As we now know, the Brexit bandwagon could continue to roll on until October this year – or it could just as easily stop shortly. Either way, it is concerning that Labour is still not clearly and consistently ahead in the polls for a possible general election. Indeed, Labour was not a beneficiary of the hammering the Tories took in the local elections of 2 May. But should Theresa May go, this does not mean the current Conservative government will do similarly. Shouts of ‘General election now!’ from the left forget the rudimentary mechanics of how our parliamentary system works (for better or worse – usually worse) and that what does unite the Tories and DUP, above all else, is their hatred of Corbyn and his ilk. That may well be enough to prevent a general election happening before the next scheduled one in 2022.

Of course, the situation is not helped by the sore arse Labour has gotten from sitting on the fence so long in order to try balance out its messages out in favour of not alienating or offending both its actual and potential ‘leave’ and ‘remain’ supporters. In fact, it seems to have ended up with the worst of both worlds. In the meantime, Nigel Farage and his new Brexit party make hay while the sun shines out of the tensions between different forms of concurrent representative democracy (referenda and parliament both based on first-past-the-post) in the run up to possible European elections on 23 May. So too does the SNP – albeit not to the same extent. For the SNP, the Brexit benefit bounce seems to have finally come in terms of support for independence. Time will tell whether the eve of SNP conference poll was a blip or the begin of a new trajectory. And, the independence supporting left should not get too excited about the defeat of the SNP leadership on the currency issue at its spring conference. Not because Scotland not having its own currency is not important but because the wording of the successful amendment to make preparations as soon as practically possible for a new currency does not exactly tie Sturgeon’s hands. The SNP leadership will easily be able to mould this to fit into its cautious overall approach to independence, whether that be dependent upon Brexit per se, a hard Brexit or any future qualifying tests it may wish to dream up – Gordon Brown used the latter on the Euro endlessly while Labour and the SNP currently use them on the type of Brexit and a new Scottish currency. Given the SNP leadership’s endorsement of the neo-liberal Growth Commission report (see issue 106), it won’t just be caution that is moulded to.

For the Scottish Parliament elections in 2021, polling shows support for Scottish Labour initially rose after Richard Leonard was elected in late 2017 but then fell back in 2018 to the low twenties with 2019 showing some polls indicating support now of less than 20%. Under interim leader, Jackson Carlaw, a surprisingly strong parliamentary performer, the Tories have stayed above 20% (and the SNP has seldom been below 40%). With a move to the left in policy terms, the question must be: ‘What is it that now stops Scottish Labour from connecting with more people than it does?’ It cannot simply be the continued legacy of Labour being in ‘Better Together’ (especially as that does not help explain relative shifts in support). But it might have something to do with Scottish Labour’s ability to convincingly prosecute these new policies. While Leonard cleared out the right from his top team in parliament, those now in his top team are not exactly inundated with the necessary talent to undertake this prosecution. (The SNP is not inundated with talent either but that lack of talent matters more when a party wants to be a successful insurgent). Or it might be to do with Scottish Labour’s continued refusal to countenance a further referendum on independence. Meanwhile, Corbyn has said he would not necessarily say ‘no’ and would be guided whether the Scottish Parliament has a mandate to pursue another referendum. That may be because a future Labour Westminster government might need SNP support. But at least, it stills allows British Labour to say there should be a democrat right to have another referendum even though it would maintain its right to campaign against voting ‘yes’ in that referendum. Or it might be talking mostly in terms of ‘class’ when (working) class consciousness remains so low and the SNP – through being the Scottish Government – still seems to have something of a monopoly on making anti-Tory rhetoric in Scotland. Or it might be that the right in Scottish Labour is still strong – see its recent Scottish Executive election performance – and that the longstanding Campaign for Socialism, a sister to Momentum, has membership among not much more than 5% of the party’s 21,000 odd membership north of the border. Some serious debate and discussion are needed to understand what exactly the problem is given that the left has often assumed having the right policies is the critical and deciding factor.