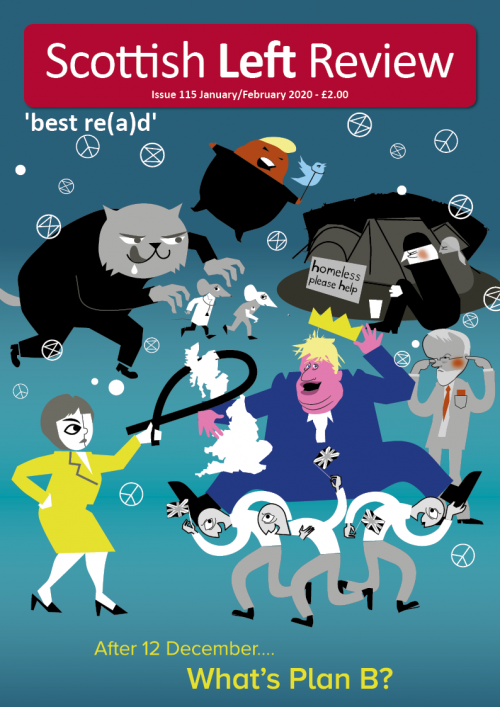 Regroup and resist – but how?

Well, the polls were stunningly accurate so we well and truly had our ‘Friday the thirteenth’. Welcome, readers, subscribers and supporters then to an unhappy New Year. We’ll all need 2020 vision to get through this year and the next ones because it’s all too glib to say all we need to do is just resist and rebel. For a start, that doesn’t take account of the difficulties in doing so before 12 December 2019 – like the sabotage of the Labour right, the timidity of the SNP leadership, the division over Brexit, falling union membership and the like. And after 12 December 2019, the hold of many of these forces will be all the stronger. Plus, there’s the demoralisation of those who campaigned for a Labour government – given that many saw the manifesto as seeking to deliver socialism- and the divisions amongst the working class with many having voted Tory for the first time.

Let’s start with one unpalatable truth which only hindsight can now really verify. The election was won by the Tories long before the election was called. According to the polls, it was in August just after Johnson was elected Tory leader. What this signifies is that issues like how Brexit, anti-Semitism, media scrutiny and so on had taken their toll on Labour long before the 29 October when the election was called. There was only the smallest amount of regaining ground by Labour in the face of a twin juggernaut of the Tories and the SNP.

Unfortunately, Labour was in so many ways the author of its own fate. It didn’t recognise that its 2017 campaign couldn’t simply be replicated for 2019. Sure, Labour led by Corbyn could be expected to have come under fierce attack. That should have been taken as read, prepared for and batted off. Even during the election campaign, the attacks for (wrongly) being anti-Semitic could have been prepared for. Only the charge of being anti-Semitic was new in any sense – albeit from 2016. On Brexit, the editorial for the September/October 2019 issue of Scottish Left Review said:

Meantime, Labour continues to get a ‘sore arse’ by sitting as many different ways as possible on the Brexit fence. It’s understandable given the split over Brexit amongst its core supporters. But it would have been far better to have declared a crystal-clear position – whatever that may have been – take the inevitable, short-term hit and then move on to campaigning on that position instead of ever grudgingly changing on shifting sands.

Labour’s final position on Brexit took that to the nth degree. Polling analyst firm, Datapraxis, calculated that a maximum of 0.8m Labour voters switched to the Tories, while the Lib Dems gained at least 1.1 million votes from Labour, the Greens 339,000 and the SNP a quarter of a million.

Then there’s the issue of Corbyn himself. Whilst we must not forget that it is wholly unhealthy in any type of democracy to so heavily have the fate of a political party tied to the fate of their leader – and which forces in our political culture are responsible for this, Corbyn did not measure up. Before the election – like over the dispatch box at PMQs – he so often failed to hit the target or land a killer blow. In the election itself, he looked tired and lacklustre. His rage seemed somewhat unconvincing. Of course, it didn’t help that the media mostly gave Johnson a free ride. But it’s also the case that Johnson was fairly Teflon-like because of the frustration over Brexit and his promise to ‘Get Brexit Done’.

All this is such a pity because Labour’s manifesto was genuinely radical and progressive. It wasn’t socialist and couldn’t deliver socialism per se as many supporters insisted. Recall the unfortunate use of the ‘A Britain that works for all’ phrase. But it could have made a massive and positive difference to the material conditions of the working class. The fly in the ointment was that Labour left activists thought it would be the vote winner and forgot at the same time that the credibility of the overall message – ‘real change … for the many not the few’ – contained in the manifesto was dependent upon things other than the manifesto itself (like Corbyn).

This brings us to the situation in Scotland. But before getting there, some perspective is needed. The Tories won 365 seats (+47) with just under 14m votes (43.6%, +1.2%) while Labour won 203 (-59) with just 10m votes (32.1%, -7.9%). This may suggest the result was rather more a Labour defeat than a Tory victory. And, though Labour won 2.5m less votes than in 2017, it wasn’t the worst result since 1935 as the mainstream media like to say because that only looks at the parliamentary arithmetic. In their time, Blair, Brown, Miliband and Kinnock fought elections where Labour won fewer votes. This again highlights the thoroughly reprehensible nature of our first-past-the-post voting system and the virtues of proportional representation.

So, Scotland was an unmitigated disaster for Labour with only one of the most right-wing of Labour MPs being the (sole) one to be returned. Although far from the only factor contributing to this near wipe-out, it’s hard to understand the stupid tribalism inherent in politics in Scotland that stopped Labour from saying, even opportunistically: ‘We’ll support the democratic right to have a second referendum on independence. But when it comes, we’ll campaign against independence.’ Ironically, that is the position of the Scottish Labour left allies, the Communist Party. Instead, what we had was Richard Leonard’s more hard-line opposition to a second referendum than that of Corbyn and McDonnell. This does not sit well with Scottish Labour’s support for the Claim of Rights. Only now are some senior voices in Scottish Labour – like Neil Findlay and Monica Lennon – as well as hundreds of left activists via Scottish Labour for Radical Democracy breaking cover to say that. Instead, Scottish Labour policy in the election was not support for a second referendum unless the SNP won a mandate for it in the 2021 Holyrood elections. If it holds to that line in any discernible way, then it will easily gift the SNP that policy commitment (and to the exclusion of growing discontent over the SNP Scottish Government’s handling of health, education and transport). Scottish Labour will likely face another wipe-out in those 2021 elections

That the SNP won (effectively) 48 seats given the situation in Kirkcaldy and Cowdenbeath is all the more significant when one considers its manifesto was thin and based upon fairly explicit support for independence and stopping Brexit. But, again, some perspective is needed as this was not quite the re-run of 2015 when the SNP won 56 of the 59 seats. The Tories still have six seats albeit it down from 13 in 2017 and are now confined to the Borders and the north-east. The lack of a surge from the LibDems was epitomised by Jo Swinson losing her seat. The extent of the SNP victory is better measured by recognising that from 2017 to 2019, the party’s share of the vote went up from 37% to 45%, with the Tories falling from 29% to 25% and Labour sliding from 27% to 19%. The results of the 2015 election for vote share were 50%, 15% and 24% respectively.

The seeds of Labour’s defeat on Brexit, it seems, were also sown many years earlier. The legacy of Blairism and ‘new’ Labour still reverberates for many in the north and north east of England. Feelings of being the victims of globalisation led many working-class people to vote for a lying Tory toff despite a radical Labour manifesto. It seemed as if class hatred had evaporated. So, the ‘blue tide’ breached the ‘red wall’. But with Brexit being done – in as much as Britain will leave the EU on 31 January 2020 – and Corbyn no longer leader by March, will the Tories retain this support? Will they become the workers’ party and people’s government as they say they are?

Let’s now look at the future. Did too many of the left put too many of their eggs in Labour’s basket and not sensibly anticipate the result (given that polling methodology had been improved since 2017)? Will Labour swing to the right, and does the election result mark the end of the Corbyn project? We’ll get some sense of this from the elections for leader and deputy-leader positions fairly soon. How will Johnson’s professed ‘one nation’ Toryism fair under the tensions between free traders and protectionists, liberals and social conservatives and ‘true blue’ southern shires and ‘blue collar’ northern Britain within the Tories?

In Scotland, most immediately we need to think about the Alex Salmond trial which begins on 9 March. Whatever the outcome, the SNP will be damaged as Salmond is pitted against Sturgeon. But who will be the beneficiary and what will it do for support for independence? Further ahead, is the third in a row (2015, 2017, 2019) win for the SNP at Westminster the beginning of a permanent trend for it? Will the results of the Holyrood elections in 2021 cement this in the run-up to the 2024 Westminster election? Most would expect a Tory Westminster government to be a great recruiting sergeant for the SNP and the cause of independence (especially as a left unionist project is in decline or on the defensive now). But, probably, the most strategic dilemma for the SNP is that having won so handsomely again, how will it not look impotent and adrift when a Section 30 Order is again rejected? How long can it dial up the rhetoric without seeming like wearing the emperor’s new clothes? Will it manage well this tension in the run up to the Holyrood elections in May 2021? This is where it is likely to be because it will not countenance an unofficial referendum or extra-parliamentary action. What difference will Scottish Labour’s new – yet to be defined – constitutional offer have on its level of support?

We asked these and many other questions based around a ‘what happened?’ and ‘what do we do now?’ perspective to a range of left activists and commentators. We hope that out of this some consensus may begin to emerge and then out of that consensus some action may be taken because in the battles ahead, words will only be worth anything if they result in effective action. In this regard, some have mentioned ‘getting the [non-Tory cross-party] band back together’ of in the form of a Constitutional Convention from 1989 or a Scotland United from 1992. Recalling both these phenomena, it seems apparent that the mass mobilisations of Scotland United will be necessary but they will only become sufficient when part and parcel of a wider programme of political change.

• Although this ‘thanks’ should have gone in the last issue of 2019, the editorial committee of the magazine wish to publicly record their gratitude to all those involved the in the production and publication of Scottish Left Review – the proofers, the readers, the cover designer, the typesetter, the web uploader, the printers, the subscriptions manager and the like. So much of this labour is voluntary that without it Scottish Left Review simply would not be able to keep going.