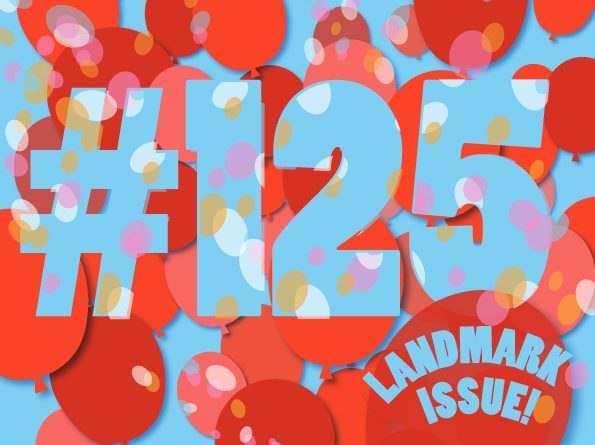 Though our cover celebrates reaching issue 125 (see below), this should not detract from the major global issue continuing to be the climate emergency.

Since our last issue, a combination of the IPCC ‘code red’ report and the outbreaks of sustained torrential rain leading to flooding from Edinburgh to London and Germany to China as well as huge wild fires in North America, Siberia and Greece have highlighted the pace and extent of the crisis. Just two details graphically highlight the catastrophic nature of what is going on: for the first recorded time ever, rain fell on the peak of the Greenland ice cap and in central China a whole year’s rain fell in just three days. These events are of biblical proportions. Climate change denial is now completely untenable but that does not mean there is the political will to take the appropriate action to stop and reverse these changes. At the same time as all this, billionaires blasted off into space on combinations of commercial-cum-vanity projects. It’s not too hard to see how the rich will be able to take action to escape the worst of the effects of climate change by using their superior resources, meaning there are not just environmental and humanitarian aspects but also a class aspect to the climate crisis – just as there continues to be over COVID19 in terms of ability to self-isolate (financial, spatially) and widening gaps in wealth. So, all those in Scotland have a special role to play in the coming period as for two weeks in November, the world’s eyes will be on Glasgow. In addition to a major demonstration on 6 November, the COP26 coalition (www.cop26coalition.org) will convene a People’s Summit in Glasgow from 7 to 9 November. This will see hundreds of meetings, discussions, action-planning sessions and networking taking place with information being shared from within the official COP26 summit with the thousands of participants in the city and beyond.

Another human tragedy continues to unfold in Afghanistan. Despite trillions of dollars spent and thousands of lives lost, what is stark is that western, US-dominated, imperialism cannot build stable and socially just democracies that are capable of withstanding the threat from reactionary forces. We shall look at this in more detail in the next issue.

Closer to home, and despite allowing areas for disagreement, the danger of the Scottish Green-SNP pact is not so much facilitating the greenwashing of SNP but, for the Scottish Greens, a strategic mistake in the power play of politics. The Greens will be no more able to pressurise the SNP from within government than they could from without. And, they will be giving up some considerable freedom and independence in the process. This would foresee a Green German scenario where the illusion of influence is gained but the reality is rather different – in the case of Germany, becoming somewhat right-wing. On Fair Work, the agreement is a considerable watering down on the Green’s May election manifesto. Here, the language is highly conditional without firm commitments. As one of the negotiators, Maggie Chapman, puts the case for the pact in this issue. In the next issue, we will scrutinise the claims in more detail.

In doing so, we have outlasted any other left magazine published in Scotland in the post-war period. Radical Scotland, which emerged out of the SNP’s left-wing ‘79 group, lasted just 51 issues between 1982 and 1991. We were founded by veteran UCS work-in leader, Jimmy Reid in 2000, as his last political project. He gathered around him significant figures on the left, of different parties and none, to draw up a left-wing agenda that he hoped would influence the newly re-established Scottish Parliament, in particular, but also society in Scotland more widely.

Sustained by a loyal base of subscribers, support from many different unions and much voluntary labour, on a bi-monthly basis, Scottish Left Review has provided commentary and critical analysis. Beginning by training its fire on Blairism and ‘new’ Labour, the magazine has successfully navigated its way through challenging times for the radical left. Prime amongst these have been two sides of the same coin. First, the decline of not just ‘old’ Labour but the decay of Scottish Labour itself as it both headed rightwards and downwards, in the process vacating the territory of social democracy to the SNP. And, second, the dominance of the SNP as the governing party that talks left but whose words are seldom matched by its deeds. In the process, the SNP has monopolised what is commonly understood to be left-wing.

On top of that, Scottish Left Review has weathered the fractious implosion of what was one of the few bright developments for the left, namely, the Scottish Socialist Party. It also steered a course through the independence and Brexit debates not only by not taking sides but by allowing all the views of the left on these matters to get a fair airing within its pages.

This sense of consensus-building where possible and recognising differences and facilitating honest debate between them – as well as looking outside just party politics to examine politics as a whole – has helped sustain Scottish Left Review. It now has many more people willing to write for it than ever. All are unpaid.

In 2011, a year to the day of Jimmy Reid’s death, Scottish Left Review established the Jimmy Reid Foundation. Over its life so far, the Foundation has produced nearly 100 publications (policy paper, pamphlets, briefing notes) and organised dozens of meetings. Its well-attended annual lectures have featured Jeremy Corbyn and Nicola Sturgeon amongst others. This year, STUC general secretary, Roz Foyer, will deliver the lecture (see advert below)

So, what of the influence and impact of Scottish Left Review? It has provided an intellectual resource for many by critiquing, for example, the nature of neo-liberal independence which holds sway with much of the SNP leadership. It has given extensive coverage to the arguments and actions of those in the environmental movement that believe fighting for climate change also requires fighting for system change.

Has Scottish Left Review led to any new legislation in the Scottish Parliament? No, is the answer – though that may be setting the bar a little high given the tight management of the Parliament by the political parties. There are certainly instances of influence within Parliament though. In calling for the resignation of then Scottish Labour leader, Kezia Dugdale, in September 2017 after she made clear her opposition to Jeremy Corbyn, a senior Labour insider attributed Scottish Left Review a crucial role in ratcheting up the pressure on her to go.

So, it is with some wind in its sails that Scottish Left Review looks forward to reaching its two-hundredth issue. You can help it do so by subscribing and supporting at http://www.scottishleftreview.scot/ where you can read all 125 issues for free.

While Scotland was a poor country at the end of the seventeenth century, it is misleading for Adam Charlton to claim in SLR (124, July/August) that the Darien adventure ‘left Scotland bankrupt, and it was in this context that a predatory England entered into union with a financially ruined Scotland’. Scotland’s debt at that time was less than £200,000 compared to an English debt of £14.5m, with the population ratio being 1:5. By 1714, the UK debt had grown to over £36m. The Treaty of Union was a deal between the ruling classes of the two countries facilitated by bribery. The Duke of Hamilton was made an English duke, and awarded the Orders of the Thistle and the Garter and appointed as British Ambassador to Paris to secure his support. The Duke of Argyll was given an English peerage for himself and a Scottish one for his brother. The Duke of Queensberry obtained an English dukedom and an annual pension of £3,000 for life. William Paterson the architect of the Darien scheme was rewarded for writing pro-union pamphlets. The English Court made clear to the Scots that they were preparing for military invasion if the bribery and propaganda should fail. The Scots held out for a federal solution but this was rejected by the English. Someone had better tell Gordon Brown. When the terms of the Union became known there was rioting in the streets of Edinburgh and Glasgow and the terms were publicly burned in Dumfries. Of 90 petitions sent to the Scottish Parliament not one was in support of the Treaty.
Colin Darroch, Glasgow

Best re(a)d from our early issues

Socialism for the many?

The right-wing Institute of Economic Affairs provided an unlikely source of hope for the left in its ‘Left Turn Ahead? Surveying attitudes of young people towards capitalism and socialism’ in July 2021. Polling 2,000 members of ‘Generation Z’, it found a rejection of free-market capitalism and support for socialism where this was predicated upon state intervention. For the full report, see https://iea.org.uk/wp-content/uploads/2021/07/Left-turn-ahead.pdf

Shock and awe: investigative journalism for a change

The Ferret, in conjunction with the Herald, is to be congratulated for carrying out investigative work in the summer on who owns and runs Scotland. Its exposé of hundreds of undeclared meetings between corporate lobbyists and the SNP Scottish Government highlights the reach and influence of neo-liberalism, going well beyond the much-maligned Charlotte Street Partners.
See https://theferret.scot/tag/who-runs-scotland/