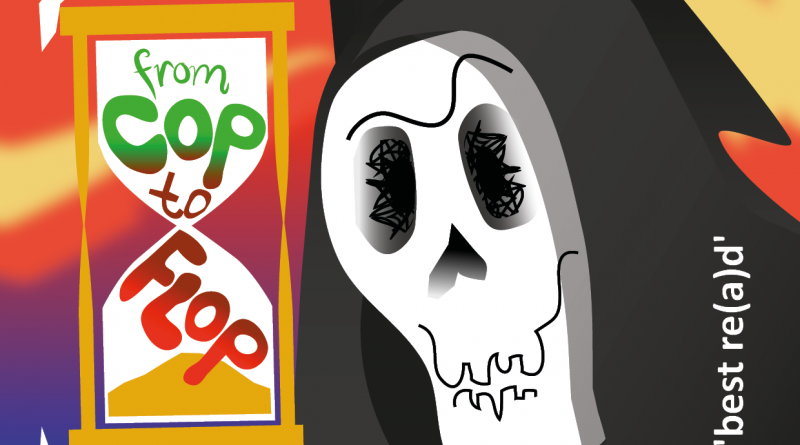 On the road to hellfire, damnation and floods: the great COP-out

With BoJo’s leadership of the Tories and the Tories themselves both in freefall, it may seem odd to lead this issue on COP. Anyone on the left craved such a Christmas present for 2021 – or to start the new year of 2022 with such a spring in their step. But whether BoJo falls and the Tories further dwindle in the polls, there is no immediate prospect of the Tories leaving office and, therefore, very little possibility of sufficient measures to stop climate change. But we will – in this editorial – return to the subject of BoJo’s blues shortly.

Glasgow was a greenwash as the lead articles by Stephen Smellie and Mary Church make plain. Both counter that where any source of hope exists for reversing a continuing climate catastrophe, it came from outside the formal COP proceedings. The question for the left that exists is not just how to continue the mass mobilisation that the demonstrations and actions around COP represent but how to use the mass mobilisation to exert leverage on governments and other key actors. This is because while the mobilisations were unprecedented, and built upon the campaigning work of the likes of Extinction Rebellion (XR) and others before them, there was very little evidence that they had any effect on the proceedings. The task is a huge one: for getting all the main countries – with their hollowed out parliamentary democracies – and powerful transnational companies to act as one and in the right direction could be regarded as being as difficult of herding cats. Maybe the expectations of what COP was likely to achieve were too high, given that those that have created the problems are highly unlikely to come up with the solutions to those problems, especially when their vested interests would be challenged. It would be that bit easier to tackle this problem if there was a single world government – or at least a global and all-encompassing body of international governance that had both teeth and resources to coerce the unwilling into acting.

One response to this enormous challenge is to look to what can be done within Scotland, in terms of the SNP Scottish Government, local authorities, other public bodies and campaigns targeted at private concerns and companies. The same is true of that for Britain as a whole. One example is UNISON’s ‘Getting to net zero in public services’ report, launched during COP. Another is Friend of the Earth Scotland’s advice on how to stay active – see https://foe.scot/5-ways-to-take-climate-action-after-cop26/ Whilst this approach is correct and sensible in as much as it represents the ‘think global, act local’ perspective, it is only partially so because there is still the need to ‘think global, act global’. We encourage our readers and supporters to respond to this challenge by getting in touch with suggestions for articles or any feedback letters on the matter.

Turning back to the Tories, BoJo’s seeming strengths of bluff, bombast and bluster are now being regarded as making up his Achilles’ Heel. Many Tory MPs believe these characteristics are so ingrained in him that there is no prospect of him having a makeover or turnaround for 2022. Labour has levelled in the polls and is ahead in some of the more recent ones. Historical trends suggest this is not an endorsement of the opposition, and in particular Starmer’s move to the right and so-called political respectability. Rather, it is a case that the opposition party basks in the reflected rays caused by the Government’s difficulties. The one highlight Starmer provided was to say that BoJo is ‘socially distanced from the truth’ – that was as good as it got, speaking to Starmer’s strategy of targeting BoJo’s integrity rather than his policies and politics. It would have been far better to come out fighting on the issues of the cost of living as the main line of attack. This is because it would more clearly have spoken to the normally hidden class dimension of politics in Britain. But it is also because concentrating on sleaze has paradoxically something of a corrupting influence – when the wrongdoing is identified and then punished, it tends to normalise the system that remains. In essence, taking away the sleaze and corruption then leaves us with a meritocracy where everything is said to be fair because individual hard work and talent are fairly rewarded. Meritocracy is a subterfuge for an unequal society precisely because so-called equality of opportunity – especially through education – never results in equality of outcomes precisely because the foundations that it exists upon are already inherently unequal. Just think about where those children that get to go to the better schools and universities come from in terms of their social class.

So, all this does not bode well for Labour building a positive endorsement of itself and its policies. And, should Starmer lead Labour into office in 2024 – the next scheduled general election – then we should not expect him or his government to be a great reforming Prime Minister or a great reforming government (as was the case with Attlee and the 1945-1950 Labour government). Inevitably, this brings us back to Scotland and the issue of independence because if progress at Westminster is still ruled out then many will look to see where a ‘Scottish road’ might take us. Increasingly, there is a view that the SNP is part of the problem and not the solution for the cause on independence. Since the referendum on 18 September 2014 and until the earlier summer of 2020, support for independence was always less than 50%. From early summer 2020 until the spring of 2021, support for independence commanded the majority. But then it went into reverse with the last poll conducted of 2021 possibly being an odd outlier (as it gave a significant majority for independence). Much of this movement one way or another would seem to be related to positive and negative perceptions of how the governments of Holyrood and Westminster reacted to the pandemic. With the SNP Scottish Government promising not to move on requesting a Section 30 Order necessary to trigger the process for holding a further referendum until late 2023 at the earliest, the SNP has become something of a roadblock in the view of many. But it is also something of an immovable object not facing an unstoppable force in the form of an independent-of-the-SNP independence movement.

In the meantime, it is only the likes of former Labour supporter, actor, Brian Cox, that has taken a flight of fancy in deeming the SNP to be social democratic (Herald 12 November 2021). He is right that Scottish Labour is no longer social democratic but thinking the SNP has succeeded Labour here is something from a script of a fantasy film. Social democracy is fundamentally defined by the willingness of the party of government to use the levers of the state to intervene in – and alter – the processes and outcomes of the market to the benefit of the mass of the populace. The continuing trail of evidence that the SNP is not social democratic is plentiful, with the latest additions being over allowing private companies to bid for service provision in the National Care Service and appointing a person with no experience of running railways to be the new chief operating officer of Scotrail when it moves into the public sector in April. It was Abellio’s failure to adequately run Scotrail and not the SNP’s commitment to public ownership that has led to the transfer to the public sector. Appointing Joanne Maguire because of her ‘wealth of leadership experience’ in running private and non-private sector organisations in a new managerialist way merely highlights this.

Finally, we wish our subscribers, readers and supporters a happy new year even though it might be a somewhat forlorn case of hoping against hope. COVID continues to keep the pandemic going in 2.0 or 3.0 versions. We must hope that it does not play any part in preventing the continuation of existing collective struggles – and the emergence of new ones – in the fight for social justice in Scotland and elsewhere.

News from the Jimmy Reid Foundation

Launch of ‘Beyond ‘Just Transition” paper

The paper and the recording of the launch are available here:
https://reidfoundation.scot/2021/12/video-of-meeting-of-launch-of-beyond-just-transition-paper-now-available/

The Foundation wishes to record its thanks to the STUC for technical assistance on the night of the launch and for hosting the recording.

On behalf of the Foundation, Emeritus Professors, Brian Boyd and Henry Maitles, made a submission to the Scottish Government Muir Review of education in Scotland based upon their paper with John Kelly which the Foundation published in June 2021 and called ‘Liberal education in a neo-liberal world’. The paper and the recording of its launch are available at:
https://reidfoundation.scot/2021/06/recording-of-liberal-education-in-a-neo-liberal-world-meeting-of-7-june-2021-now-available/

Can we set sail the good ship Scotland on a new course for social justice?