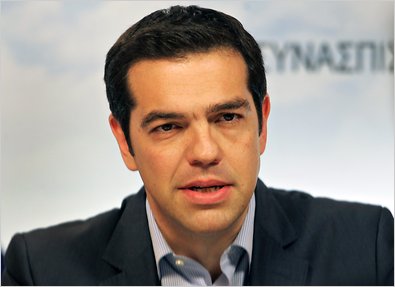 Europe is at a critical crossroads. And there are two ways to go. The alternatives are clear.

Either we stand still. Or we move forward. Either we consent to the neoliberal status quo and pretend that the crisis can be resolved with the policies that have recycled it. Or we march into the future with the European Left.

Because the peoples of Europe are in danger, democracy itself is in danger.

Neoliberalism is a threat to the peoples of Europe. The extreme right is a danger to democracy. And the only alternative is the resistance of the peoples and the strengthening of the European Left

The European election is a good chance to change the balance in Europe. If we succeed, we will no longer be a marginal political force.

Europe needs its own Glass-Steagall Act, to separate commercial and investment banking activities and prevent such a dangerous merger of risks into one uncontrolled entity. Europe needs effective European legislation to tax offshore economic and entrepreneurial activities.

The European political establishment saw the debt crisis as an opportunity to rewrite Europe’s postwar political economy. It is for that reason that they reject our proposal for a European Debt Conference, modelled on the London Debt Conference in 1953, to give a definite and viable collective solution to the problem. It is for that reason that the European political establishment – a voluntary hostage to Ms Merkel – insists to impose on the entire Eurozone South policies that have deteriorated the initial problem.

We have to stop austerity. Current policies create pain, disappointment, unemployment and disaster in Europe. We have to create hope. Europe needs a ‘New Deal’ to fight unemployment and to finance its future. If Europe is to survive it needs redistribution and solidarity.

Those are the foundations of the totally new Europe that we are fighting for; in the place of a Europe that redistributes income to the rich and fear to the poor.

With the active solidarity of a broad European anti-austerity movement, we shall win that fight.

Because, for the European Left to grow and influence in a decisive way the everyday lives of ordinary people, it needs the broadest possible social and political alliances.

The European election is a good chance to change the balance in Europe. If we succeed, we will no longer be a marginal political force. We will be in the field fighting to aid the peoples of Europe in favour of citizens, of employees and young people for future of Europe.

We have to cooperate and bring message of hope and change in every European country. Firstly create resistance. Give hope to disappointed people that we could win and change the conservative policies and political parties that divide Europe. We want to unite Europe.

The European election next May provides a historic opportunity for the peoples of Europe to make change possible. To reject those who are recycling a world crisis in Europe. And, against common logic, insist that a recipe that has failed is a recipe to be continued.

I am very optimistic that in these elections the EL will be the surprise and that finally we will be able to change the balance. We will win with more forces united. And I believe we will finally manage to create a very clear alternative proposal for Europe.

And, allow me to repeat; the European Left is the alternative to neoliberalism. When the wheel of History turns back, it is the Left’s moment to move Europe forward. We represent the forces of labour and we will win this fight.