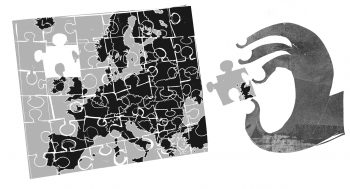 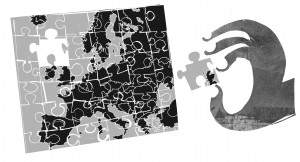 Support for the EU as potentially progressive, as Yanis Varoufakis believes, or a bastion of European peace as Jurgen Habermas thinks, ignores some uncomfortable and ugly historical facts. It’s difficult to see the European Coal and Steel Community (ECSC) agreed in 1951 by France, Germany, Italy, Belgium, Luxembourg and the Netherlands, the predecessor to the EU, as anything other than an instrument for capitalist development at the expense of labour. As for peace and stability, what are we to make of the death and destruction that followed Yugoslavia’s disintegration when Germany ensured the dissolution of the former republic by recognising Slovenia and Croatia on the grounds that they fulfilled ‘the conditions set by the European Community’.

Defenders of the EU say ‘Ah but what about the advances that ‘Social Europe’ has given us – works councils, sex equality, health and safety laws, the working time directive’ and a range of other benefits included in the Social Chapter. This argument is all the more powerful when it is contrasted to the aggressive market-led approach of Thatcher and Major of that period. The Chapter proposed, for example, better rights for pregnant women than Britain; it also proposed a 48-hour maximum working week and a plan to give part-time and temporary staff who worked at least eight hours a week, the same employment rights, social security and contractual benefits as full-time workers and more. Unsurprisingly, it was opposed by Thatcher and Major, and Britain negotiated an opt-out.

Even though key areas in class struggle like pay, the right of association, the right to strike and the right to impose lock-out, were not included, many trade unionists, socialists and social democrats felt it offered a set of tangible benefits as opposed to the anti-union measures of the Tories. Many still do. But they ignore something very important. This was a temporary concession by capital at a specific time and for specific reasons.

Jacques Delors, then European Commission president, recognised that increased labour movement resistance to worsening economic conditions could de-rail the EU project. The Chapter defused that and struck a blow for ‘Rhine capitalism’ of strong competition and social protection, which has recently won the affections of Nicola Sturgeon.

In 1997, Blair cancelled the opt-out, while simultaneously promising the Chapter would not be allowed to undermine competitiveness. Indeed, throughout the 1990s and 2000s, it was EU business as usual as we have seen endless pro-business directives on ending public ownership of basic utilities, ending state aid for industry, introducing compulsory competitive tendering in public services, ending local government direct labour schemes, and allowing companies to pay workers from other states at rates lower than the locally agreed rates.

This attack on the social element of social democracy was extended to the democratic element following the 2008 crisis. The Troika inflicted the Excess Deficit Programme on Ireland leading to mass unemployment and cuts in wages, pensions, and of course public expenditure. The savagery here was matched and exceeded by the pain suffered by Greece. The deflationary Treaty for Stability Coordination and Governance ratified in 2013 will further crush public spending.

So can we reform the EU? That is what former Greek finance minister, Yanis Varoufakis, is trying to achieve in his new ‘Democracy in Europe’ movement: ‘we need a movement that rises up throughout in Europe, at once, with the same agenda everywhere to re-politicize political decisions and to democratize the decision making process’. But with an unelected bureaucracy at its core (the EU Commission) and a largely decorative parliament, a realistic strategy for reform beyond Yaroufakis’s spontaneous rising has yet to be laid out convincingly.

The level of unaccountability, which means that the last time the EU’s financial books were signed off by auditors was 1994, is a clear indication of the impenetrability, not to say corrupt, nature of its operating system. The alternative approach is to leave the EU and to safeguard key services like health that TTIP threatens. We can then work with whatever progressive European countries are prepared to begin the global task of shifting the balance of wealth and power in favour of the people of Europe and away from its capitalist elites.

Vince Mills is secretary of Scottish Left Leave. Membership is open to all union and left individuals wishing to campaign to leave the EU.