Jimmy Reid is often described as ‘the best MP that Scotland has never had’, but I believe that Jimmy was so much more.

Sometimes it is easy to forget the scale of events which Jimmy led and took part in, especially when there was no social media. In June 1971, when the Tory Government announced that it intended to liquidate the shipyards on the Clyde, 800 shop stewards in a matter of days organised a mass rally with a stoppage called for the 24 June, 100,000 people stopped work and 50,000 marched on Glasgow Green. In July, Jimmy’s suggestion of a ‘work-in’ captured the imagination of workers world-wide. On the 18 August, 200,000 workers put down their tools in support of the UCS occupation and 80,000 marched on George Square. Jimmy gave rousing speech in which he said: ‘Today Scotland speaks. Not the Scotland of Edward Heath, Gordon Campbell, Sir Alex Douglas Home – of the lairds and their lackeys. They have never represented Scotland, the real Scotland, the Scotland of the working people. No title, no rank, no establishment honour can compare with the privilege of belonging to the Scottish working class … Edwards Heath, I tell you this. We are going to fight and we are not going to change. Either you will change or we will change the Government.’ The workers won the occupation, making history worldwide. 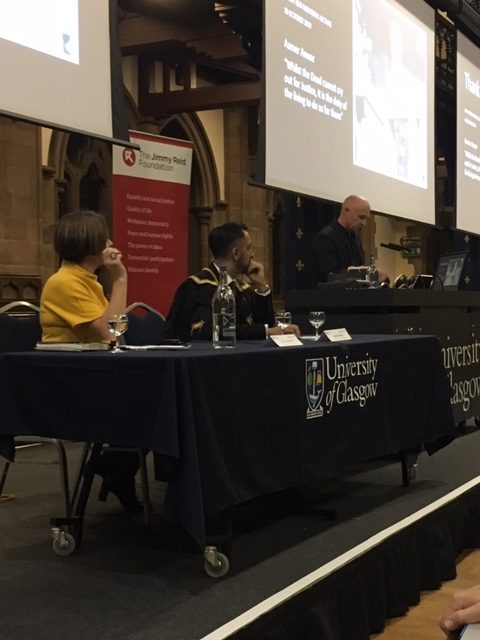 In 1972, in this hall, wearing the same robes as I, he gave a rectorial address which has stood the test of time. The rest of Jimmy’s life informed us, and we are all grateful to the Jimmy Reid Foundation, for ensuring his memories sustain us in the battles that lie ahead. At his funeral at Govan Old Parish Church, I remember seeing the great and the good, politicians from across the divide, the First Minister, comedians, trade unionists, sporting heroes and the Shipyard workers of Govan who lined the route as his coffin was escorted. There was a great deal said that day about Jimmy but the memory of his friend, a former shipyard welder, Billy Connolly is what stayed with me: ‘Jimmy put things simply. I remember him saying that if you look at these housing estates and high-rise flats – look at all the windows. Behind every one of these windows is somebody who might be a horse-jumping champion, a formula one racing champion, a yachtsman of great degree, but he’ll never know because he’ll never step on a yacht or formula one car – he’ll never get the chance.’ Sadly, for many young people behind those windows today, things have not changed very much.

We pay tribute to Jimmy Reid a self-taught intellectual, philosopher, trade-unionist, husband and father, who never sold his soul for high office, never seduced by the offer of a lordship, he always remained rooted in the community from which he came, never scared to tell the truth, often at great cost to himself. Jimmy warned us about alienation, the rat race and capitalism’s race to the bottom.

The video of Aamer’s lecture can be found at http://reidfoundation.org/2019/10/video-of-aamer-anwars-2019-jimmy-reid-foundation-lecture/