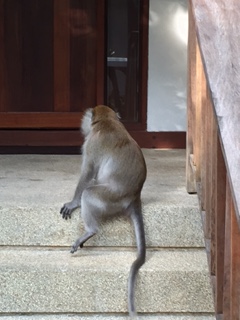 • In April 2017, a crucial Presidential election was held in Ecuador where the socialist candidate, Lenin Moreno, was up against the US sponsored right wing candidate, Guillermo Lasso. Given some of the setbacks suffered by the left in South America recently, it was expected that Ecuador’s socialist government would face the same fate. In fact, Moreno won the election with 51% of the vote. His Country Alliance Party has a commanding majority in the National Assembly.

Jennifer Bonnar and Chris Ruddy travelled in Ecuador at this time following several months teaching English in the south of the country. This is their account:

After six months teaching in the town of Loja, we travelled extensively including time spent in Quito at the height of the election campaign. Tension was high as rival forces took to the streets and airwaves yet it became apparent that these were very different campaigns. The Moreno campaign was characterised by huge popular rallies of ordinary working people, many from an indigenous background with the Ecuadorian flag predominant interspersed with many red flags and banners. These were overwhelming peaceful and inclusive. The contrast with the right wing rallies could not have been greater. Smaller, exclusively white with a strong element of racism and always ready for violence. They also had the media mostly on their side. There was a lot of tension with violence just below the surface but it became clear that most of this was coming from the Lasso campaign and seemed to be very organised.

Moreno came to the campaign to defend the track record of the socialist government and of his predecessor, Raphael Correa. This included impressive social programmes to improve health care, education, pensions and child care; political reforms to make the country more democratic and to give the indigenous people more rights; and a dramatic shift in foreign policy aligning Ecuador with progressive governments across Latin America. However, in more recent times the economy has faltered due to a collapse in the oil price and there was also much evidence of economic sabotage by capitalists and political interference by the United States which appeared to be significantly bankrolling the opposition campaign.

One sinister aspect of the opposition campaign which we picked up on almost constantly in our travels was its refusal, in advance, to recognise the eventual result. Its position seemed to be; if we win fine; if we don’t, we’ll continue in our campaign to bring down the government by almost any means. These are not democrats trying ‘to restore democratic legitimacy to Ecuadorean politics’; many of its leaders supported previous corrupt, dictatorial regimes in the country and have openly welcomed United States intervention.

On our travels we also witnessed a clear class and ethnic divide in the two campaigns. Moreno draws his support overwhelmingly from poorer sections of society and from the previously under-represented indigenous population. His movement also draws on a broad alliance of unions, community groups, single issue pressure groups and socialist and progressive forces throughout the country. The core of the opposition is white and middle class. It also draws heavily on a legacy of racism towards the newly empowered indigenous people. One thing that shocked us when living and travelling in the country was the level of racism including among poorer working class whites who feel threatened by the rise of those they considered to be inferior.

The new president, Lenin Moreno, seems an impressive figure. In his sixties, he has was formerly the Vice President and, following a shooting at an attempted robbery twenty years ago, is wheel chair bound. He made his reputation in Ecuadorian politics as a campaigner for disability rights and was nominated in 2012 for a Nobel Prize. He campaigned to protect and extend the socialist programme of the government and to uphold the constitution against attacks by the US sponsored opposition. The contrast with his opposite number could not have been clearer. Guillermo Lassa is a multi-millionaire businessman with close links with the United States. To say he has a chequered past is an understatement and he has been investigated for massive tax fraud – not surprising given that most of his companies are registered abroad.

We were back in Britain when the final round of voting was completed confirming Moreno’s victory. Huge crowds took to the streets in all the major cities to celebrate while the opposition, as expected, has refused to recognise the result and continues to campaign against the government. It may well step up its campaign of destabilisation. Whatever happens, we will continue to follow events and wish our many socialist and progressive friends every success in the future.

Jennie and Chris are both 24 and both went to University in Edinburgh. Chris is a member of the SNP. In 2015, they both travelled extensively in South America before returning to teach English as a Foreign Language in Ecuador. Both were active in the YES Campaign in 2014.