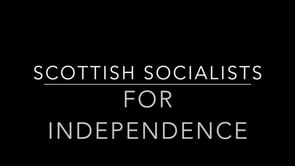 First, let me congratulate you for the sixteenth anniversary of the journal, a worthwhile effort that has succeeded in providing a voice for the left in Scotland and a much-needed theoretical platform. I would like to add my voice to the independence debate as a grassroots activist who has been keenly involved in the independence campaign over a couple of decades.

I mention the ‘couple of decades’ because, like many others, it has taken me a while to detach myself from the position of supporting the Labour Party and to define for myself what I think is progressive politics. Through this process, I have had to work out how I see a future for the left in Scotland. This is no easy process because we are all of us bound by loyalties to our political roots, in my case, communist, and as such tied to the idea of a mass labour movement across Britain linking us in strength and solidarity.

I have come to see this view as skewed and inaccurate, disguising as it does the centuries’ long machinations of the English ruling class to dominate and rule the smaller nations of the United Kingdom and the English working class. The monarchy and deep-rooted class system that is centred in Westminster will do whatever it takes to maintain its privileged position. To define Westminster as a democracy is at best, inaccurate, at worst, political obfuscation. Linguistic terms to blur and obscure the reality of material conditions have always been a favoured ruling class mechanism.

In my view, the progressive forces in all the various parts of Britain must take up the struggle at the level appropriate to their local circumstances. ‘One size fits all’ doesn’t cut it. Political development across the separate parts of Britain has been uneven and different. The call for a united working class movement conceals this and fails to recognise the specific character of different nations and regions.

What I find disappointing in the present debates in SLR and among the left in general is the depth of anti-SNP sectarianism and the refusal to acknowledge its competence and the progressive nature of many of its key policies. If, indeed, we are keen to move the SNP more to the left, the best way to do this is to work closely and cooperatively with them in comradeship as the majority Scottish party.

Much has been written about the hubris of the Labour Party in Scotland and its sense of having the right to lead Scotland politically. If we are to learn useful lessons from history, we must never forget that the one constant in life is change and it happens whether we are watching carefully or not.

Sectarianism takes many forms and I have become aware of another form of political sectarianism in the yearlong Scottish centenary commemorations of the 1916 Easter Rising. I welcomed the support of the STUC and the May Day Rising events committee but it is remarkable how few left activists have come forward to assist in taking the message of history and reconciliation into communities.

This is especially surprising when you consider that a major organiser of the Rising was James Connolly, Scottish born, Edinburgh raised and a close friend of Marxist and communist, John MacLean. Connolly’s analysis of the links between nationalism, socialism and empire provides useful pointers to us now at this stage of our political journey.

All of us carry strands of thinking that perhaps we inherited when very young and were not very aware. But we have a duty to modernise our thinking and check that we are not carrying bits of prejudice from the past. This is particularly crucial at this point when there will be many urgent factors of change to consider in Scotland.

I would say lastly that the way to win political support is by presenting optimistic and positive ideas and by giving people at the grassroots the sense that the future is ours for the taking. The ‘yes’ campaign was a marvelous demonstration of this and the best thing we can do is to use its example and begin to build a springboard for the next independence bid.

The success of Women for Independence in mobilising women was an exciting development- a reminder of the powerful women activists of a century ago that included Mary Barbour, Helen Crawfurd and Margaret Skinnider, the Scottish heroine of the Easter Rising.

I hope these comments are taken in the spirit of comradeship and sisterhood in which they are offered!

Maggie Chetty is Chair of the Communist Party of Scotland and was Secretary of Scottish Socialists for Independence during the referendum campaign. She is currently the treasurer of Glasgow Central Citizens Advice Bureau and a member of Unite.