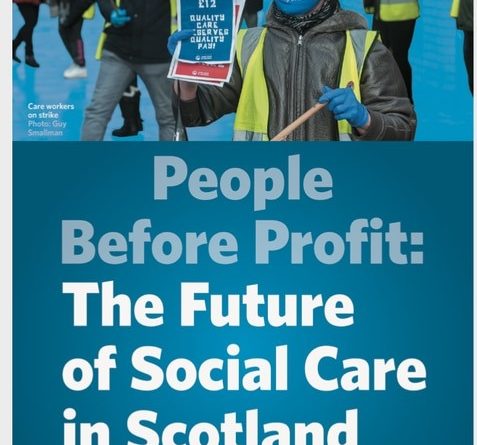 Stephen Smellie says of the Feeley report it’s a case of several steps forward and massive one back.

The broken system of social care has been fully exposed during the pandemic. It is a system designed to create a market so private companies can generate profits, not one designed to deliver care. It created minimum-wage-level-insecure employment, staff shortages and poor standards of care. It crashed when it failed its most basic responsibility – to protect the vulnerable people it was charged to look after.

The sector is dominated by private companies providing the majority of places in care homes and care at home services, with council services and services run on a not-for-profit basis by various voluntary and charitable organisations making up the rest.

Private and voluntary sectors had to be rescued by the state stepping in, both financially and logistically, to ensure PPE was provided, staff were paid to isolate, that they were trained in infection control and that these measures were implemented. Even then it was still a struggle to make sure these things were delivered in some parts of the private sector.

In this midst, the Scottish Government appointed Derek Feeley to lead a review of Adult Social Care. His report, published in February, proposes a number of steps to address the crisis including creating a National Care Service (NCS), reforming current Integration Joint Boards, developing a human-rights led service, greater inclusion of people with lived experience of care in the design of services, including their own, and steps to address the pay, terms and conditions and security of the employment of social care workers. The report was welcomed by unions and others for these headlines. However, as always, the devil is in the detail of what is proposed.

The case made for improving social care workers’ conditions and to implement the proposals from the Fair Work in Care Report are welcome. The Report rightly links how staff are treated to standards of care. Feeley recommends a national Job Evaluation Scheme to set wages across the sector. This needs to be extended into a full bargaining system with the right of unions to organise and represent the workforce in the national bargaining system. Feeley also adopts the UNISON’s ‘Ethical Commissioning’ proposal and calls for clear standards to be established to ensure Fair Work principles and standards of care.

The proposal for a NCS based on ‘partnerships and not market places’ has been widely welcomed. In recent months, the one voice regularly raising opposition to a NCS was Scottish Care – the voice of the independent (private) care sector. In its recent briefing to MSPs, it said the voice of their sector has been heard. It is correct. It can now welcome the NCS because Feeley’s vision of it is based on increasing public spending on social care whilst protecting the existence of the care market and ensuring that profits will still be made for shareholders within what he calls an ‘actively managed market’.

Feeley rejects nationalising the care sector. Using a caricature of how a NCS could be established, he argues the cost of buying out the private sector would be huge and not the best use of public money. Actually, removing private-for-profit interests from social care could be done without huge expenditure by the use of procurement processes that reflect commissioning priorities on care standards and Fair Work principles alongside national systems to supply quality resources to providers at efficient costs. More of a ‘tightly controlled’ rather than ‘actively managed’ market would allow the best of the not-for-profit sector to enhance public sector provision. Those for-profit companies who found such a system limited their ability to make profit and wished to leave would be free to do so. Feeley’s approach here illustrates that whilst workers’ voices through their unions were heard on pay and condition, they were not on a NCS that was based on public money serving solely public good.

The proposals raise further concerns. Integration Joint Boards (IJB), where councils and Health Boards (4 Councillors and 4 appointed Health Board members) are responsible for commissioning and integrating social care services, are to be reformed. That would be welcome if it addressed the current failures and weaknesses of the IJBs such as their lack of democratic accountability and their added local bureaucracy that neither integrates nor improves services. However, Feeley proposes that IJBs should be accountable to a NCS and take on the role of procuring as well as commissioning services, therefore, reducing further the role of councils, relegating them to merely one provider of social care services, and further reducing the local democratic oversight over social care.

A NCS will include the current functions of the Scottish Social Services Council and the Care Inspectorate and so will be responsible for the commissioning and procurement of services, for the inspection of services and for the development and regulation of the workforce – essentially regulating and inspecting its own performance. It will be answerable to a Scottish Minister. The concept of independent scrutiny and democratic accountability within social care will have been eradicated.

That this is allied to investing significant sums of public money in order to secure decent conditions for both staff and service users, whilst retaining a market so that private companies can continue to extract profits should cause concern for openness and transparency in public services. People with lived experience of social care, the social care workforce, and tax payers, deserve a better care service than that proposed by Feeley

Stephen Smellie is Depute Convenor UNISON Scotland. He is also the author of a contribution to the new pamphlet called ‘People Before Profit: The Future of Social Care in Scotland’ which can be purchased at https://www.calton-books.co.uk/books/people-before-profit-the-future-of-social-care-in-scotland/

On the union frontline in a pandemic