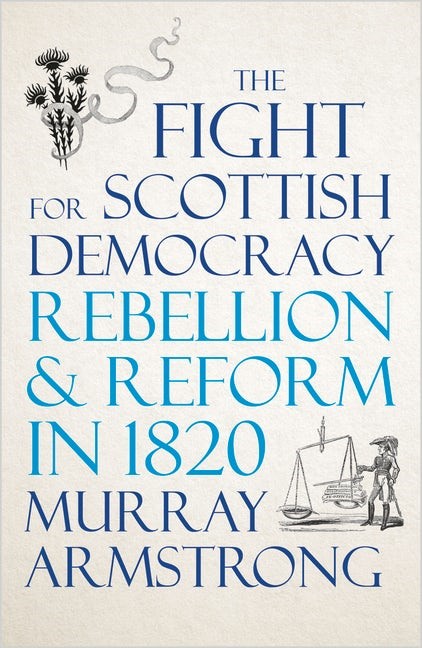 The Fight for Scottish Democracy is a strictly historical account though it begins with a scene that would not be out of place in a lurid Victorian novel: two women in the dead of night opening a recently dug grave in the ‘paupers’ ground under the walls of an ancient church. But the specifics of place and time are not imagined. It is August 1820, the ecclesiastic building is Glasgow’s cathedral, the road they drive down in a cart carrying the coffin is the city’s deserted High Street and their destination, Strathaven, is a very real 25-mile journey to the south.

One of the two women was the daughter of James Wilson and, with the help of her cousin, she was bringing home the decapitated body of her father who had been executed earlier that day. They recognised him, after forcing open the lid of the coffin, by the bloodstained hanky that covered his head: it was the one he had dropped on the scaffold to signal to the hangman he was ready to die.

The attention to empirical detail in this carefully researched book is intrinsic to its worth and a reader alert to the geography of Glasgow and the west of Scotland will gain much in following its narrative. We learn that it was in Glasgow’s Saltmarket that two men made illicit use of their employer’s shop to compose type for printing the first batch of posters calling for strikes and a provisional government to ‘Sweep from our Shores that Corruption which has degraded us below the dignity of Man’. Some 60,000 people in the five counties around Glasgow heeded the call and downed tools.

We learn that it was at the corner of High Street and Duke Street that citizens gathered to read the proclamation on the morning of 2 April. A Lanarkshire magistrate tried to tear it down with the point of his umbrella but, after failing to show any badge of office, he was prevented from doing so by a young weaver named Andrew Hardie. The Star Inn, 57 Ingram Street, became headquarters for military officers who called in extra troops and posted artillery at either end of the town bridges.

Andrew Hardie along with John Baird was executed ten days after James Wilson and, significantly, all three were weavers. Independent weavers around Glasgow formed an educated community aware of political forces shaping their world. Janet Hamilton, a villager near Coatbridge, described how groups of weavers in a locality would meet in the evenings to read newspapers, discuss events and ‘talk[ed] of Bonaparte on the stone seats beside their doors’.

With the defeat of Napoleon, concern shifted to domestic affairs and petition after petition asked for extensions of the vote and reform of parliament with its ‘rotten boroughs’. Demobilisation of 350,000 troops in 1815 brought an economic slump that heralded misery and starvation. The 1819 massacre at Peterloo, graphically depicted in the book, made clear to many that petitions were a waste of time – a lesson still there for the learning – and earlier in the same year the Cato Street conspirators hard resorted to trying to murder the entire British cabinet and Prime Minister.

Murray Armstrong provides a detailed account of the bungled insurrection that took place in early April the following year. The bigger plan was for rebellion to break out in northern England at the same time but this never happened and one small group on their way to capture weapons was attacked by mounted troops at Bonnymuir, west of Falkirk. Arrests and searches continued into May and ninety-eight people were indicted for high treason; three were executed and the remainder transported across the world to Sydney Cove.

Chartists and radicals erected a memorial to James Wilson on the site of his cottage in 1846. Following the crumbling of the memorial to Andrew Hardie and John Baird, a new monument was erected at Sighthill cemetery in Glasgow. When their bodies at Stirling were exhumed and reinterned there in 1849, thousands turned up to pay their respects. Armstrong ends his book by noting that their struggle for democracy is still commemorated at the cemetery each September.

Hardie and Baird clasped their hands together on the scaffold. When they swung by their necks those at the front of the crowd could see them attempting to grasp each other in solidarity for one last time.   The Fight for Scottish Democracy earns a vital place in remembering those who struggled at such tremendous personal risk for democratic rights now taken so unquestionably for granted.

Sean Sheehan is author of ‘Žiżek: A Guide for the Perplexed’ (Continuum, 2012) and’ A Guide to Herodotus’ Histories’ (Bloomsbury, 2018)