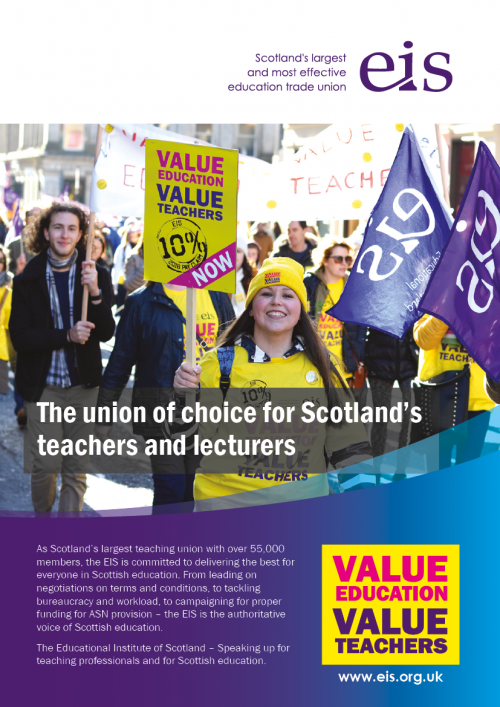 Scottish further education lecturers settled a pay dispute in June 2019 after six days of strike action – the only part of the Scottish public sector to take strike action in pursuit of a cost of living pay rise this year. For those EIS-FELA members, this bitter dispute was always about more than pay. Further education (FE) colleges were semi-privatised in 1993 when they were removed from local authority control and placed under business-dominated, Boards of Management. The years that followed saw an explosion in management posts and salaries while local bargaining led to huge divergence in lecturer pay and terms and conditions across the sector – the strongest branches holding firm on conditions and increasing pay while the weakest fell further behind.

As Cabinet Secretary for Education in the SNP government of 2011, Mike Russell made few friends in further education, forcing large scale mergers and reducing Scotland’s 41 colleges to just 26. As part of this programme of reforms, Russell brought a national bargaining structure into existence, but his successor, Angela Constance, had taken office before negotiations stalled and the first national industrial action took place in March 2016.

The one-day strike in March 2016 had a simple demand – equal pay for lecturers, closing a sector-wide salary gap of £14,000. After a quarter century of local bargaining, building a national union in FE was no easy task – we represent 5,000 members spread from Stranraer to Shetland, with lecturers often entering FE as a second career after a lifetime in non-union industries. National bargaining met with fierce management opposition from the outset. In March 2016, none of the Glasgow colleges and only four UHI colleges had signed up, and principals openly doubted the ability of the union to reach beyond the large central belt colleges. They got a fright – a combination of lay member-led organising and social media ensured picket lines across the country and management folded the next day, agreeing a transition to equal pay across a three-year period.

The struggle for equal pay was never going to be an easy win. In the months that followed the first victory in 2016, management regrouped and started to resist, insistent that they would not pay out without swingeing attacks on terms and conditions. Further strike action followed in 2017 with the ‘Honour the Deal’ campaign. Lay officials visited staffrooms the length and breadth of the country and a high-profile social media campaign delivered the necessary statutory ballot turnout – by now, we had active branches even in colleges that had not signed up to national bargaining. After six days of strike action management conceded, paying the equal pay settlements won in 2016 and agreeing to new national terms and conditions. National bargaining was now established across the country.

Equal pay for lecturers was not a pay rise, but an equal pay settlement to ensure lecturers were paid the same rate for the job across the country – it took no account of the cost of living. After two years of fruitless negotiations, we took a further six days of strike action from January 2019, supported by a withdrawal of goodwill and resulting boycott, in pursuit of a cost of living pay claim. In contrast to the teachers’ restorative pay claim, our demands were modest – a rise in line with public sector pay policy and the award already made to support staff unions in the sector for the same period.

The attitude of Colleges Scotland and the Scottish Government to this dispute and to the further education sector more widely stands in stark contrast to the approach adopted in the teachers’ dispute. Despite increasingly wild press releases and parliamentary briefings containing apparent factual inaccuracies, the Scottish Government failed to intervene. The Scottish Funding Council even accepted and validated management figures which inaccurately portrayed our pay claim as costing double that of the support staff – in fact, the difference was marginal.

EIS-FELA members have responded by standing strong and united on the picket lines and in our branches. While there was a danger that the teachers’ pay campaign – with 50,000 EIS members to our 5,000 – would overshadow us, the campaigns have created an organising energy in the union and have fed into and inspired one another, with more cross-sector union work as a result. In the next session, this will be taken forward through the lecturer professionalism agenda, where we are fighting against attempts to introduce ‘instructor’ and ‘assessor’ roles to deliver the curriculum to learners – damaging the quality of learning and teaching and undermining national conditions in a way that would not even be conceived of in Scottish schools.

In the past four years, we have fought and we have won – equal pay for lecturers, national terms and conditions, a national transfer to permanence agreement which will drastically reduce the number of staff on zero hours and fixed term contracts, and a cost of living pay rise – and these apply to lecturers across the entire sector.

For investment and education-led recovery and restitution