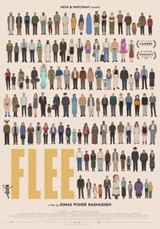 True stories which are told in first person throughout a feature length film are unusual. Flee is just such an unusual film. Formed as a virtual documentary, this story is brought to life through mixed media animation, archive footage and original sound recordings. The interrogator who elicits the narrator’s harrowing yet tender tale of fleeing from Afghanistan is the protagonist’s close friend and director, Jonas Poher Rasmussen.

Opening scenes take the form of seemingly therapeutic discussions between these two friends. The protagonist, Amin, is introduced as an animated character who is caringly coached to reveal the details of his traumatising journey as a refugee child from Kabul.

In interviews, Rasmussen explains that his decision to create an animated character, whose pseudonym is Amin, was to protect his friend’s privacy and anonymity. Animation director, Kenneth Ladekjær, further explains: ‘Initially, Jonas wanted the film to be like a radio interview … But then later, he really wanted to keep Amin [the main character] anonymous. The decision to make an animation mostly came from that: Animation added a layer of anonymity to it. We never wanted it to be a caricature of a location or people’.

To empathise with Amin is to understand his world and, therefore, the context of pseudo-therapeutic discussion and first-person narration affords informative intimacy. Rasmussen begins by asking his friend: ‘What does home mean to you?’ and Amin replies: ‘When you flee as a child, it takes time to trust people’. As his story unfolds between the two men, we thus gain insight into why this may be.

With growing capacity for open self-reflection, Amin is comfortable about sharing the fact that he is gay, which would have been impossible in his homeland. This factor is almost incidental, however, as we come to understand why, as a boy, he had no choice other than to be trafficked from Afghanistan.

Kinetic combinations and juxtapositions of monochromatic drawings and colourful, animated images, strategically intercut with documentary clips, evoke a range of painful, poignant and also happy realities. In places, the film echoes similar artistic techniques which were used in a ground-breaking music video from the mid-80s, which was created for a Swedish song about love breaking through barriers in both real and imagined time and space. No coincidence perhaps, that Flee contains similar themes of achieving love and success against almost impossible odds.

As this evocative tale unfolds, we learn that Amin’s backstory was only revealed to Rasmussen after years of friendship. Finding safety and, ultimately, love and a settled life in Denmark seems more than remarkable when we learn of this backstory. Its significance within the bigger picture is that many children and adults were forced to flee from Kabul in the 1980s. Most had no choice other than to be trafficked to Moscow.

One particularly heart-breaking memory for Amin is that he and his friends and brother were powerless to intervene when corrupt Russian police raped a young female refugee. During his telling of this part of his story, it becomes clear that Amin battles with his conscience and cannot relieve the guilt which he feels in relation to this horrific incident.

He clearly recalls his family’s escape to alien places far from home, whilst elucidating on the exploitation of their vulnerability and their desperation. He retells these experiences with raw honesty, whilst, with coaching from Rasmussen, he relates the inner conflict involved in his more recent journey of finding contentment and relative happiness in his present life. Small moments, such as the story of a stray cat who lived in his new garden until Amin and his partner finally moved in, and their domesticated cat, both of which become part of the household, add to the priceless beauty of the film. Touches like these subtly convey themes of home, for the trafficked boy who is by now a settled adult.

Flee conveys the truth of a child having to learn to live a lie just to survive and to be accepted as an ‘unaccompanied child refugee’. By contrast, the tale of Hassan Fazili’s family seeking refuge in Midnight Traveller (2020) was filmed in real time on the family’s mobile phone cameras. Their filmed journey ended in a refugee camp in Hungary, with no sign of being settled in a new family home. Flee reflects a happier resolution for Amin, from the settled perspective of his Danish home, where he currently lives with his partner. In some ways, it comes closer to being an adult fairy tale. A beautiful and rare film experience which is highly recommended.