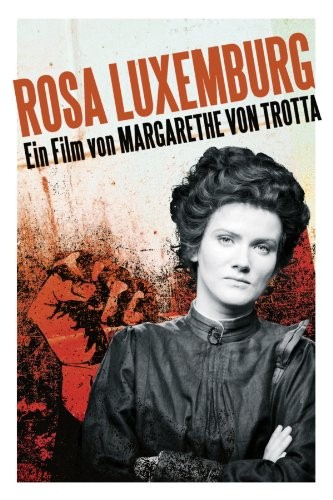 This timely re-release of Margarethe von Trotte’s biographical feature film about Polish Marxist pacifist, philosopher and revolutionary socialist, Rosa Luxemburg, movingly represents the crushed opposition to autocracy and fascism. Largely an existential piece about Rosa, this important film emphasises that her political and social relevance today continues to be prescient, on the centenary of her tragic death by murder.

The unambiguous power of von Trotte’s female protagonist saw Barbara Sukowa winning Best Actress prize at Cannes in 1986 for her excellent performance, which unashamedly highlights Rosa’s provocative, stoical activism, her depth of commitment to her purpose and her graceful, compassionate soul. The film gives voice to the meaning of social democracy through Rosa’s fiery intellect; rejecting the notion of martyrdom, by reason of humanity, her qualities of passionate loyalty and quiet self-deprecation, her personal sacrifices and flaws and her essence as a formidable educator are equally brought to light.

Socialism and democracy conveyed through recreations of Rosa’s dialogues with her comrades and remarkable political speeches reveal the central belief that the proletariat holds a respected place in European society. Shunning challenges and pity from her socialist-communist colleagues and her beloved, long suffering family, Rosa’s presence amongst them in the film divulges their dedication to her, along with their admiration of her unshakeable endurance. It undoubtedly helps that Sukowa’s fellow actors included her true-life husband, Daniel Olbrychski, as Rosa’s soul-mate and husband, Leo Jogiches. Seemingly effortless, although impeccable, chemistry is created on-screen through their performances – each partnership therefore exquisitely manifest.

Rosa experienced paradoxical worlds of middle-class existence and political imprisonment throughout the last fourteen of her 47 short years of life. Her foresight as founder of The Red Flag, The Spartacus League and The Communist Party of Germany showed her far-left intellectualism, her ability to sustain humour and loyalty during her darkest of times and the symbolic gift of a deep red rose from her comrades are all conveyed with clear meaning in the film.

Spoken by Sukowa, more private words from Rosa’s letters evoke the gentlest aspect of her soul. Images of fluffy skies accompany her innermost thoughts and hopes; the image of an overloaded ox being beaten reflects her empathic memories of deep sadness, inescapable burden and absolute exhaustion. Ultimately, ripples in the dark waters of Landwehr Canal in Berlin devastatingly echo von Trotte’s insightful reflections upon the callous murder of her female protagonist.

Maybe forever to be seen by some as a controversial figure, evidently unbroken until her ninth imprisonment, Rosa is latterly portrayed in deep consideration of her comrades. Her final release from prison signalled a critical stage in the history of workers’ fight for socialism and peace. Quieter and recovering from illness, Rosa’s growing scepticism towards using socialism and nationalism within political discourse and practice beckoned opposition paramilitaries’ final determination to crush her existence.

Rosa Luxemburg was first released during an era when world leaders publicly denounced the Berlin Wall and called for its destruction – which came to be in 1991. Post-McCarthyism and post-Holocaust, von Trotte’s erudite 1986 representation of early twentieth century fascism and paramilitary Freikorps must have powerfully resonated – and must continue to resonate – with knowing horror.

Conveying no doubt about the unaccountable cowardice, misogyny and evil of those who presumed to end her life and her ideas without trace, this film’s telling of Rosa Luxemburg’s life remains true to events in Poland, Russia and Germany during her time. Set within a decade prior to the Brown Shirts becoming the Gestapo under Hitler and Himmler, the terrifying spectres of Nazism and supremacist racism could not be clearer to present day and future audiences of this outstanding film. Modern-day socialists will undoubtedly relate parallels to current, significant rises in white supremacy within global political rhetoric and to facts such as that Germany’s far-right National Democratic Party recently gained solid political ground.

The Eyes of Orson Welles