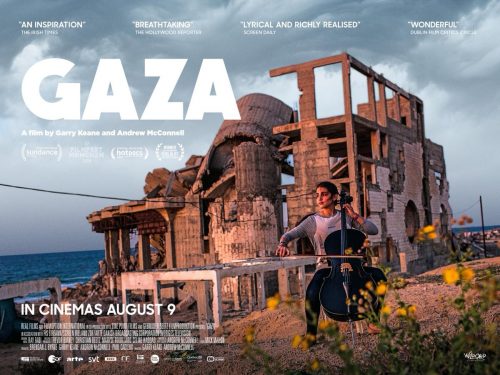 The 25km by 7km Gaza ‘strip’ represents one of the worst conflicted places on earth. It is globally renowned for its political and religious unrest and its consequent, war-torn existence. In our own lifetimes, news broadcasts have informed us about its 1967 occupation by Israel during the six-day war; its 1993 direct control under the new Palestinian authority; its continually debated occupation by Israeli military until 2015 and its present conditions under Hamas regime.

Gaza affords us an opportunity to take a closer look at some of the two million civilians who live amongst the confines of this tiny area’s ruined streets. The clear intention of Keane and McConnell’s documentary is to give voice to these people’s fears, hopes, dreams and realities.

In the film’s opening scene, teenage boys raft upon Gaza’s Mediterranean seas; they swim underwater, seemingly carefree. The natural light and energy of this imagery is instantly uplifting; whereas realistic focus follows the same boys’ stories, which are mainly conveyed through 18-year-old, Ahmed Abu Alqoraan. Unlike most teenagers living in the free world, he faces the daily grind of surviving in what another adult citizen calls an ‘open prison’.

Thus, from his position as an undeserving captive, Ahmed steadily explains the reality of not being able to continue his family’s tradition of fishing to eat and live. He and his fellow citizens explain that a three-mile restriction on fishing territory is imposed, monitored and enforced by Israeli border control; and that fly-fishing transgressors are instantly charged and imprisoned. Joining older, experienced fishermen on their boat later in the film, together, they evidently resolve to sustain and develop their working relationships and traditions, despite crippling restrictions and the lack of fish within permitted territory.

Ahmed’s 36 brothers and sisters, for whom Deir Al Balah refugee camp is home, represent a young workforce for Gaza, according to their father’s beliefs. The 18-year-old is more in touch with the painfully confining circumstances in which he, his siblings and cousins are forced to grow up. He plainly realises that his dream of someday owning a big fishing boat and of employing all of them is unlikely to become reality under the present regime.

Identical hopes and realities are not limited to large refugee families. Originally from Jerusalem and of Istanbul heritage, lawyer, Manal Khalafawi, and her 19-year-old cellist daughter, Karma, share their stories about being trapped in a place where their educated, cultured minds and hearts have no chances to thrive, grow or take flight. They recognise that the only realistic option is for them to do humanitarian work in Gaza, which may open opportunities for future generations, if not their own.

We observe taxi drivers, shopkeepers, textile machinists and a disabled rap artist maintain active, working, sociable communities despite being continually caught between opposing agendas of power and destruction. We also join young people taking part in daily protests at the Israeli-Palestine border; we learn that their shouting and stone-throwing sometimes triggers bombings by Israeli military. Gaza’s citizens tell and show us why those responses are inhumanely disproportionate.

The hardest challenges of getting a film made and screened in, or about, Gaza have been articulated by such as human rights activist, Jen Marlowe. In 2018, she explained these involving such as: ‘Getting an entry permit from the Israeli army, securing permission to screen … from Hamas … and [preparing] for inevitable power cuts [and in prospect of organising screenings for… films] Israel bombed the Al-Meshal Cultural Centre … reducing the potential [screening] venue to a pile of rubble’.

Gaza, therefore, must represent an exceptional achievement by its filmmaking team, who explain: ‘… we knew that Gaza was so much more than its portrayal in the media. This unique and vibrant land, rich in culture and history, is home to a people who are oppressed and dehumanized but who are also resilient and strong, and who want nothing more than to live normal lives’. Their documentary clearly owes much to the tremendous spirit and humanity of its filmmakers and of the Gaza citizens they have come to understand.

This once-idyllic land and sea have been rendered almost worthless, due to Gaza’s position as a war pawn. Its bordering waters are strewn with garbage and its potential as a sustainable source of life, industry and ecology for Gaza itself is miserably repressed. Other films may not have captured the resilient hopefulness of its civilians’ ventures, which persist against all odds, obstacles and cynicisms. This documentary does.