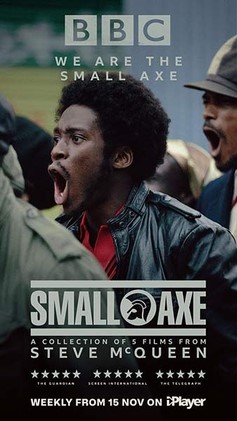 Artistry and realism synergise perfectly within screenwriter and director, Steve McQueen’s, body of work, much of which includes historical drama films which have been inspired by real people and events. This is also true of his recently released Small Axe anthology of five films; each of which focuses upon a different story about black British people and their communities; all of which reflect cultural and political realities between the late 1960s and the mid-1980s.

The first in the series is Mangrove which depicts events surrounding the infamous trial of the Mangrove Nine at London’s Old Bailey in 1970. Popular press at the time created the designation ‘The Mangrove Nine’ to classify nine black British men and women who were arrested and tried under charges of inciting a riot at a protest against police. One of the nine, Frank Crichlow (Shaun Parkes) owned The Mangrove restaurant, a ‘hip place to be’ according to McQueen. It was a place to which local activists and intellectuals along with internationally famous musicians and artists gravitated having opened in 1968 within an increasingly culturally diverse part of London’s Notting Hill.

McQueen has emphasised in interviews that the Caribbean restaurant represented a sense of belonging and a stake in British culture to Crichlow, his family, his friends and his customers. The film director also reminds us that Mangrove relates to a particular era within which Enoch Powell publicly delivered what became known as his ‘Rivers of Blood’ speech, in 1968. Ted Heath consequently sacked Powell for making inflammatory remarks which amplified racial hatred but not before white supremacist sympathisers empowered the Conservatives towards victory in 1970.

Outstanding performances by the film’s actors include that of Sam Spruell, who plays Frank Pulley, a police officer who instigated and enacted relentless raids and violence against Crichlow and his friends, amongst whom were activist and broadcaster, Darcus Howe, (Malachi Kirby) and the female leader of the British Black Panthers, Altheia Jones-LeCointe (Letitia Wright). In a recent interview, Spruell shared the point that following the trial of the Mangrove Nine, a popular newspaper at the time carried the headline that Pulley was ‘the worst police constable in Britain’. Pulley and his colleagues’ actions in the film reflect the fact that they were driven by their own racist assumptions, in seeking to criminalise their targets. Spruell leads these action scenes with unsympathetic realism and with no holds barred, largely thanks to McQueen’s directing style. We, thus, understand that Pulley and his colleagues reveled in their own prejudices, racism and brutality, both within the film and in historical reality.

Through tracking unfolding events which saw criminal charges which were eventually brought against the Mangrove Nine by Pulley and his colleagues, anger on both sides is exposed. Thus, truthful reflections and portrayals take precedence over bias in this as much as in any of McQueen’s remarkable films. Emphasis, however, is again upon throwing clear light upon institutionalised racism which was successfully challenged, if not adequately punished.

Renowned Scottish QC Ian MacDonald (Jack Lowden) provided legal counsel and representation for a number of the Nine who were not representing themselves at the trial. He fought for changes to the decision to deploy an all-white jury against the black defendants and won: two black British jurors were consequently included. MacDonald would later state in a legal journal: ‘The Mangrove Nine trial was a watershed because we learnt through experience how to confront the power of the court, because the defendants refused to play the role of ‘victim’.

McQueen stated in a recent interview that he wanted to make the Small Axe anthology of films as a means of both preserving and throwing light upon important social and political events which took place within his parents’ communities. His voice clearly speaks for generations of his ancestors who were oppressed, brutalised and effectively silenced. Yet, his films transcend politics through taking us through the feelings, the joyousness, the tragedy, the pain and the humane resilience of those real lives he has chosen to depict. Juxtaposing lively, life-affirming images with moments which either shock or appear suspended in time, every second of his films is truly captivating. Described by some of his cast and crew as being ‘a magician with a camera’, the depth of cultural learning experienced through McQueen’s films is genuinely extraordinary, both inside and outside of his filmmaking process. His creations are an honour and a treasure to behold.