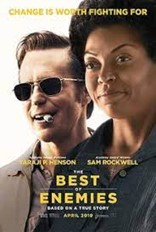 Durham, North Carolina, 1971. A school which educates black pupils only is on fire. This catalytic scene follows the film’s opening images, of a Ku Klux Klan (KKK) initiation, which are accompanied by a voice-over of real-life antagonist, C P Ellis, talking about the sense of belonging that he got from his Klan membership. The Best of Enemies film is based on the novel The Best of Enemies: Race and Redemption in the New South by Osha Gray Davidson.

Durham’s burning school ironically symbolises forthcoming change in the education system, where the integration of black and white pupils will be accepted as the new norm. The school fire, meanwhile, leads to a heightened civil battle between black and white adults attending local council forums. At this point in time and place, an archaic municipal system of societal segregation is governed by KKK leaders and sympathisers, ensuring stasis for white supremacists. Until community activist, Ann Atwater (Taraji P Henson), whose contacts and friends touch into healthcare and business, determines to forcefully shake up their racist system.

Vociferous in their articulations about fairness and civil rights, and about housing and education, the black residents of Durham are effectively represented by the outspoken Atwater. As their undaunted leader, she intensifies her efforts behind the scenes, to win against white male council representatives, most of whom are KKK members. Leading speaker Ellis (Sam Rockwell) is the ‘exalted Cyclops’ president of KKK. He is also Atwater’s nemesis.

A dramatic turning point comes when the NAACP (National Association for the Advancement of Coloured People) helps Atwater to file a lawsuit against the finding of the council that the rancid shell of the burned-out school is suitable for black pupils; that they should suffer in silence despite that they have to learn, work and live in dire, unhealthy circumstances. Consequently, the battle and the change between arch rivals, Atwell and Ellis, become the focus of this great film. Their conflicted development towards mutual respect, ultimately, speaks for humanity and family, over and above political or economic supremacy.

In fighting for equality and integration, Atwater proves herself to be a shrewd, unstoppable force for good. Meanwhile, taciturn Ellis is confronted by the fact that business at his gas station is dwindling to the point of being non-existent. This situation is revealed in the film to be caused by his antediluvian resistance to a changed and changing society, where blacks have economic and political powers.

Evolving through a process where a town ‘charrette’ is organised by conflict resolution expert, Bill Riddick (Babou Ceesay), the entire community must reach an agreement in accepting this reality. Ellis and Atwater are afforded co-chairing status within Riddick’s formalised, inclusive agenda. This setup replaces former, chaotic, would-be negotiations, where councillors literally turned their backs on Atwater, while she had to browbeat them, just to be heard.

Apparently coincidentally, Ellis and Atwater become involved in a healthcare wrangle, involving his son’s residence at the local care home. Ellis’s anger reaches breaking point when he discovers that his son, Larry (Kevin Iannucci) – a teenager with Down’s syndrome – has been moved to a room where his usual freedoms are restricted. Whereas his influential wife, Mary Ellis (Anne Heche) retains her sense of compassion and morality with her black neighbours at home, his explosive anger towards the care home staff conflicts with his family’s need to ensure that his son receives better care and conditions.

Illustrating how and why these complex relationships and situations work out, the film highlights that Atwater’s talent for political communications are at the crux of discovering agreeable solutions. Her focus on managing white collar working relations also proves to be the key to winning the trust of C P Ellis, who eventually publicly resigns from the KKK.

Dramatic scenes within the care home contrast with another scenario, where Atwater meets Ellis at his council offices. There, she silently faces a life-sized mannequin dressed in KKK uniform. The reason why this scene resonates is that it carries a sense of historical terror, white supremacy, lynching and segregation. It powerfully conveys that, other than in its present context, when violence does not occur, no good would have come from her facing up to a KKK uniformed member on his own turf.

Rockwell shines in his portrayal of Ellis as a seemingly irredeemable figure. Henson is outstanding in portraying Atwater’s straight-talking character, who takes no prisoners. The Best of Enemies is both entertaining and timely: strongly recommended.