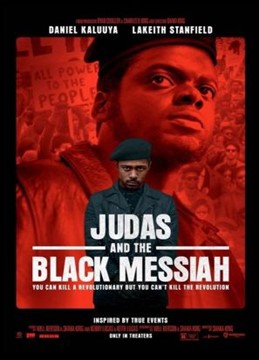 In late 1960s Chicago, socialist revolutionary Fred Hampton led the Illinois Black Panthers. As their popularity and power strengthened and grew, they attracted the attention of the highest USA government officials, right up to the President. Operations were consequently authorised by J Edgar Hoover, Director of the Federal Bureau of Investigation (FBI), against the revolutionary ‘black Messiah’ and which concluded in the cold-blooded murder of twenty-one years old, Hampton, by police during a violent raid upon his home.

Judas and the Black Messiah is based on the true story of the betrayal of Hampton (Daniel Kaluuya) by career thief Bill O’Neal (Lakeith Stanfield) who was coerced into infiltrating the Illinois ‘chapter’ by FBI operative Roy Mitchell (Jesse Plemons). The film introduces O’Neal as he robs other black men by posing as an undercover police officer, before he makes his getaway in a car which he steals on impulse. His treacherous yet plausible qualities are, thus, clear from the start of the film through to its end.

Kaluuya delivers an earth-shattering performance which embodies Hampton’s spirit, both as a loving, expectant father and as a driven, humane leader. The British actor’s screen presence in the role is electrifying, heart-breaking, charismatic and utterly captivating. He has interestingly revealed in interviews that he voluntarily took opera lessons to lend cadence and tone to his vocalisations of Hampton’s enthralling speeches. He has also spoken of the respect and empathy which he feels for ‘Chairman Fred’, whose son was occasionally present on the film set of Judas and the Black Messiah.

As Hampton, he pronounces to the Illinois community: ‘We gonna fight racism with solidarity. We ain’t gonna fight capitalism with black capitalism, we’re gonna fight capitalism with socialism’. His oratory contrasts starkly with chilling threats which Mitchell (Plemons) soaks up at the direct command of J Edgar Hoover (Martin Sheen): ‘The Black Panthers are the single greatest threat to national security … more than the Chinese, even more than the Russians. Our counterintelligence program must prevent the rise of a black messiah from among their midst – one with the potential to unite the Communist, the anti-war, and the New Left movements’.

In a recent podcast interview, actor and civil rights activist, Sheen, plainly states his view of Hoover: ‘[He was a] fascist… a government official so high up… that he created… his own agency and ran it his own way for decades and destroyed the lives of many, many thousands of people [in his] position as director and founder of the FBI. I was given the opportunity [in Judas and the Black Messiah] to expose his level of malevolence’.

One particularly scintillating scene, where covert infiltration by Mitchell and O’Neal affords them an early opportunity to witness a rousing speech by Hampton to a gathered crowd delivers a deeply striking impact. Publicly stating his impassioned feelings to the crowd about killing violent police officers evokes the painful question of whether he almost sealed his own fate. The scene illustrates that Hampton often spoke emotionally. In reality, his plans and actions were focused on the creation of peace for both blacks and whites.

Stanfield delivers a compelling performance as O’Neal, whose duplicity is masked by his convincing allegiance to the Panthers. So much so that he accepts a leadership role whilst the Chairman serves a prison sentence for a petty theft crime which he did not commit. As a paid impostor, O’Neal evidently maintains control over his inner conflict – closely monitored by, and reporting to, the FBI meanwhile, developing trusted companionship with Hampton and his inner circle of co-revolutionaries.

On 3 December 1969, while asleep, maybe drugged by O’Neal, Hampton is tragically murdered by police in front of his pregnant wife, Debora Johnson (Dominique Fishback). In 1970, a coroner’s jury ruled that her husband’s death was a result of ‘justifiable homicide by police’. Judas and the Black Messiah, however, echoes later forensic investigations which were authorised through Federal District Court proceedings and which resulted in a damning judicial report against those accounts given by police. Although these proceedings are not featured, the sinister plot against Hampton and the callous brutality of his killers are clearly manifested in the film.

In its thought-provoking finale, Judas and the Black Messiah cuts in archive footage of ‘Chairman Fred’ at the height of his powers. This is juxtaposed against footage of a 1989 interview with O’Neal, whose betrayal ultimately resulted in Hampton’s murder and, consequently, also in his own suicide in 1990. There are overwhelming reasons to see this tremendously moving film: highly recommended.